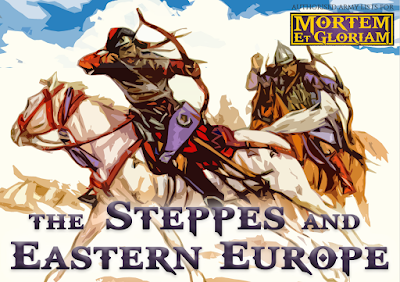 In my second game of Mortem et Gloriam event at WinterCon2018 I played against Craig who commanded an army of Pechenegs. This force was something I have never faced before. Unlike all the armies I have played so far, this one had more SuG's than TuG's and was all mounted. In other words, plenty of horse archers to lure my own force into a trap.

I also learned that Craig has been playing various historical games for years. It meant that I was about to have a game against unknown army led by a very experienced commander. I didn't quite want to repeat the mistakes of Crassus at Carrhae so I decided that I need to be very cautious and keep the army together no matter what.

If you are interested in Craig's report on the very same battle (and all his games he played at WinterCon), here is the link to his post at MeG forum:

Here are the details of the army Craig brought to the event:

I expected to fight in the shade :) With so many Horse Archers I did not need prior games against similar force to assume my army will be constantly shot at and when the time is right, the Nobles would deliver killing blow.  Hence, the first idea was to try and present unified front with the skirmishers screen to limit the effect of bow fire.

I thought it may be quite futile to chase mounted skirmishers with phalangites but if I could at least move along one flank then it would protect me from the potential attacks from one side. My own cavalry would need to be on the opposite flank to delay the enemy at the same time.

Another novelty for me was no camp. Battle wagons were deployed instead and it looked like a good target to aim for. However, getting to them would be an issue. Hence, I was very curious about the terrain set up as well as the result of Outscouting.

We ended up with quite an open field for the battle which was good and bad at the same time. Good because Pikes do not need any further problems in terms of maneuvering but bad because it was also offering the Horse Archers plenty of room to skirmish.

The more important, I think, was Outscouting phase where I was already at a disadvantage due to lower amount of cards. I got Outscouted but not completely as I had to deploy 5 elements to begin with which means that it was something around 40%. It was still good enough for Craig as he could choose the opposite corner as soon as he saw where majority of my army is.

After seeing the terrain placement I decided to follow with the plan. I chose the right flank for deployment of the army because I wanted to use the nearby woods to get Thracians a bit of protection. It also looked that I should be able to close this one and prevent any units to move around my units.

Thus the modified plan was to march the infantry on the center and right and herd the Horse Archers in front of them. While the cavalry on the left was to slow down the enemy for as long as possible. The main goal was not to lose the battle by allowing more mobile force to move around my relatively narrow battle line.

Pechenegs were invading force in this game.

Pechenegs immediately sent some scouts forward and Seleucid infantry had to slow down the advance in case there was a larger force waiting in ambush nearby. Indeed, more and more Horse Archers appeared soon and started harassing their enemies.

The cavalry on the right also advanced and was quickly confronted by more mounted archers. Surprisingly, the Nobles were not in a hurry to join the battle yet.

The Phalanx on the right continued the slow advance while Horse Archers started shooting at the marching enemy. The casualties were not that high yet but the incoming fire has already slowed down the cautious advance further.

The cavalry on the left, using the opportunity that the Nobles were not yet close enough to support the skirmishers, tried to chase them off closer the valuable battle wagons.

One of the Horse Archers units got reckless and moved towards enemy Line Cavalry a bit too close. Seleucid lancers spurred their horses and managed to catch rapidly fleeing mounted skirmishers. The pursuit also brought them to the flank of the Pechenegs on the right flank, dividing their forces into two.

While the Phalangites kept pushing the Horse Archers further and further away, Companions and Tarentine Cavalry took on a much larger force by themselves alone. Would that protect the flank of the infantry for long?

One of the Horse Archers groups spotted a gap in Seleucids battle line and managed to escape the encirclement. But three others were still chased away from their main force.

Seleucid Companions charged the enemy but due to casualties suffered due to shooting and inferior numbers, they did not last for long. It was now up to Tarentine Cavalry to distract the enemies.

Seleucid Cavalry kept chasing the Horse Archers while Phalangites tried to close the gap. It looked like at least two groups of mounted skirmishers were finally trapped.

That allowed Phalangites in the center to diver their attention to the battle wagons and units started marching towards them. It prompted Pecheneg Nobles to move towards the advancing foe to intercept them.

Seleucid forces kept pressing on the right flank and this time one of the Horse Archers units was chased away from the battle field for good. Another one managed to find the gap to run away but the third one, with the commander, has been cornered.

While some of the Phalangites continued their advance towards the Battle Wagons, Tarentine Cavalry not only defended against two groups of the Horse Archers but managed to break one of them!

Both forces were soon surprised by the fall of the night and had to disengage and regroup. The battle ended up without being resolved in favor of either side.

I would like to thank Craig for a great game! I learned a lot and I am very happy with the result. From my point of view it was a very interesting battle, where situation developed in favor of each side, depending on the area of the field. Craig was winning on my left but his right suffered casualties and some Phalangites started to march towards his battle wagons. I hope he enjoyed the game too and congratulations on 2nd overall in the final standings of the tournament!

One of the new things I have learned in this game is the direction in which the unit can withdraw while being charged. It is, of course, clearly stated in the rules but it was good to see it in action. I need to take into account that the unit can run away directly towards it front or rear, not necessarily aligning with the direction of the attack.

Second thing I am wondering about is the way I used Companions. They did not slow down the enemy for long but perhaps their presence forced skirmishers to move away and then get back. Effectively keeping them occupied on the left flank. However, I wonder if simply staying there and being eventually charged would not buy me even more time. I was nicely surprised Tarentines held and even survived the battle. But I cannot probably relay on that so I need a more solid plan on how to slow down larger enemy.

In general, while I am happy with the result, especially against much more experienced player with much more mobile force. I managed to catch 3 SuG's and lost only a single TuG. But I am still wondering what would be a better option for the deployment. Perhaps forming Phalangites 2 bases wide to spread even more would be a good idea? I also think I may have deployed some pikes on the left flank too and keep the cavalry a bit more towards the center. In this way I should be able to counter the advance of the Nobles a bit better. Especially that I learned after the game that it was due to a very bad cards selections that these units remained idle at the very beginning.

Posted by Swordmaster at 17:18