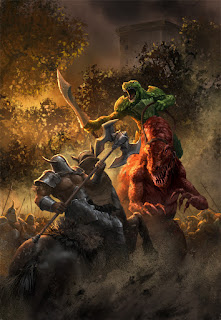 This time I am going to present a report from the battle against Mr. laribold who recently has defeated me in 9th Age with his Reptilians. We started the game on Friday 13th but had to stop in the middle of turn 3. We managed to finish the game yesterday which is great because, unfortunately, saved games tend to remain unfinished.

Another interesting fact is that laridbold initially wanted to play with Forces of Nature but some trials in his gaming club showed he didn't quite like the army after all. Then, in the break we had, he also played a couple of games with Salamanders and we already know that his army evolved significantly from what he used against me. 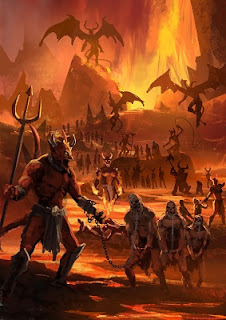 I have had two games of Kings of War recently but the first one was not finished yet. Hopefully we will be able to find time to do it as I am very curious about the outcome in the scenario. In the second game, I played a re-match against Eastern Barbarian and his Forces of Abyss. We had some great feedback on Mantic Forum about our previous encounter and EB was very eager to incorporate new ideas as well as test his modified army list. We also decided to try a scenario to spice it all up too!

After first KoW game between myself and Eastern Barbarian we decided it cannot go without a re-match. It was only a matter of time. However, EB also was wondering if he should bring Orcs again or shall he try Forces of Abyss instead, that looked very interesting to him from the very beginning. It is quite typical for EB to jump into new game and tackle a few forces at the same time and he decided to give Mantic Daemons a go!

I was very lucky as Darth had time for a rematch. He considered bringing some Elves this time but decided to give Basileans another go. I must say I was glad about this decision because Basileans are truly the army of Mantica and I think they can be a formidable opponent. Darth made quite a few changes in comparison to our first game and here is the list he used this time:

I have finally convinced Eastern Barbarian (or wardancer on some forums) that it is a good idea to give KoW a try. I actually didn't have to do much convincing but as always it is more of a problem with EB himself. You see, he simply plays so many games ( I really lost tracks of what he currently plays and collects) that I had to queue for my turn and was just lucky it was with KoW this time. :)

EB considered two army lists for his first KoW game and decided to take Orcs (Abyssals was the other option). It was more challenging choice because Orcs are considered to be more difficult army to command due to general lack of flying units (with the exception of some characters) and shooting. However, my first game against Orcs showed they hit hard and are not that easy to outmaneuver either.