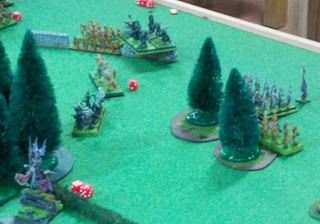 It's been a while since I played with real miniatures so when I had a chance to play against Chris, who was returning to miniature wargaming after a very long break, I was very happy for that opportunity! As I have never played against Chris before and neither against Undead army he was commanding, it was a real treat!

Chris is also blogging about his battles so I really hope he will post a new chapter of his great story, this time featuring some Elves in the eternal struggle of Good vs Evil. In the meantime, I really recommend visiting his blog:

We played in a very friendly local store, where I hope to be a more regular and frequent visitor:

I really like their tables, lots of space for everyone and fantastic terrain. All you need to do is simply go there and have fun!

We wanted to try a few things in that battle but before I elaborate on the details let me present the army Chris commanded that evening. He had some really cool old school models and his entire army was painted!

It's been a while since the most recent report but fortunately I had a fantastic opportunity to play against a great player from Oxford, Mr. Edzig, over Universal Battle . Ed has a few armies but his most recent project is about Trident Realms of Neritica, one of the forces that are featured in the Uncharted Empire supplement. He also has started a topic at Mantic forum detailing his progress with the army, I highly recommend checking the pictures, as he has some great ideas, here is the link for your convenience:

Trident Realms of Neritica is not a popular army yet so it was not easy to find some examples of how this army fights. Fortunately for me, however, Ed took part in a most recent tournament at Universal Battle and I could check all his 4 games thanks to posted battle reports. Here are the links to the games:

On of the local players from Canberra, Mr. Wedgetail, has also started similar project and he posted some updates on his blog. Check it out, as I hope we will see more from him as he prepares his army for CanCon2017:

Ed is practicing intensively for Clash of Kings tournament in England, that is going to take place in October so we used the players pack for this tournament. Because of that he also made some changes to the army list in order to be able to field fully painted army. Here are the details: