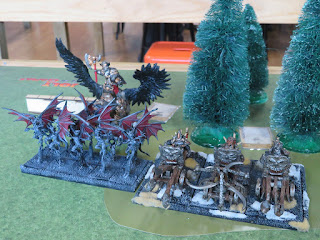 I managed to continue with Monday nights Kings of War gaming in the local store. It was even better that I know that I will need to skip gaming night in the week before Australian Clash of Kings.

This time I had a great pleasure to play against Christo who this time brought his Abyssal Dwarfs (previously I played against his Empire of Dust army).

Christo's army looks fantastic and has a great mix of Mantic units and models from other manufacturers, most notably an Overmasters from Scibor Miniatures.

In terms of composition Christo included a number of trade mark units for Abyssal Dwarfs and that also added greatly to the theme of the battle. Here is the list with the details: 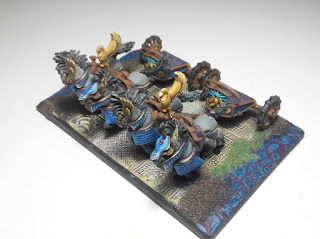 With Australian Clash of Kings 2018 getting closer and closer, I try to keep up the pace with painting and modelling. Previous week was quite productive as I managed to make bases for my cavalry units. I must admit that it makes even the old miniatures look much better and moving these units on the battle field is way easier too!

However, the main painting project I have ongoing at the moment is to finish painting chariots. I quickly learned that despite being bigger models and with fewer details, they still require quite a lot of time and attention. And the amount of details to paint turned out to be more than I expected! The fact that when I started painting them I had no clear idea yet how I want them to be painted also didn't help to accomplish the goal.
Read more »
Posted by Swordmaster at 23:30 2 comments: 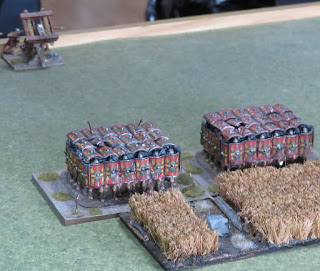 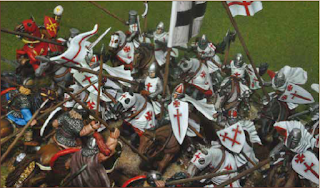 The beginning of a new year is always great for the players in Oz because it is a time of anticipation and counting days to CanCon - huge gaming convention. Second year in the row CanCon will also host Clash of Kings 2018 tournament for Kings of War players. Hence a lot of them are busy now with painting or practicing or both!

It happened that my good friend, Michael, needed to test his most recent version of Kings of War army. I have not played since Masters so some practice would only mean good thing for me too. We thus set up a game on Universal Battle!

After our last game Michael decided that he can bring back some Rifles and here are the details of his army list:

Although I have already had two games of Kings of War in 2018 (reports are being prepared!) I also wanted to continue with modelling and painting. In my previous post I mentioned I considered rebasing some of the old models and putting them on multi-bases, even if the models are going to be repainted or replaced with new ones.

To do so I used the MDF magnetized bases I ordered some time ago from Olympian Games and used rolling pins from Greenstuff World to create the scenic surface. I decided to do so for all four cavalry units I have as a test of an idea and to see if I like it, even with old models.
Read more »
Posted by Swordmaster at 22:07 2 comments:

The good plan should start with a quick assessment of where I am at the moment with the painting progress.
Read more »
Posted by Swordmaster at 22:40 4 comments: