Game 2 of Kings of Dave was against Luke and his Empire of Dust. I haven't had a chance to play against him before so it was a great pleasure to meet a new opponent too!

My first encounters against this army were not particularly successful. I hoped it was due to the fact these were my first games in Kings of War and was looking forward to the opportunity to see if I learned enough in the meantime to prevail against my nemesis!

Luke brought the army that had some familiar elements but also contained quite a few completely new units to me. I was thus very curious to see what they are capable of and how to deal with them.

Email ThisBlogThis!Share to TwitterShare to FacebookShare to Pinterest
Labels: Battle Reports, Empire of Dust, Kings of Dave 4, Kings of War 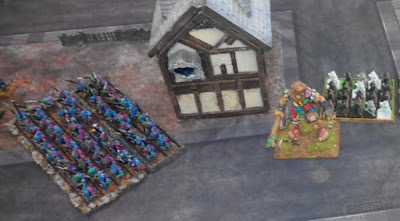 First game of my first Kings of War tournament! First time 2500 points too! In that very important moment I learned I am about to face Goblins by a veteran wargamer Rowan. I had a great pleasure to play against Rowan in the days of Warhammer 8th Edition. He is one of these players who combines great generalship, fantastic painting skills and very friendly attitude. I knew then that no matter what the result is going to be I will have a great time!

Rowan's army is at work in progress stage but I am not surprised considering how many models he needs to paint or re-paint or re-base. I can't wait to see the finished version though, because I am sure it will look amazing.

Last Saturday I finally made it to my first Kings of War tournament! It was a local one day event organized by Dave who is a very active Tournament Organizer and thanks to whom I had so much fun in participating Warhammer related events in the past.

Many players in Canberra started playing Kings of War so Dave stepped up in again and keeps organizing the tournaments. I knew then that this one would be well led and I was very excited about seeing some familiar faces after such a long break (my last even was CanCon in January 2015!). I was naturally intrigued how I can do during the event because I have mainly played on Universal Battle so far.