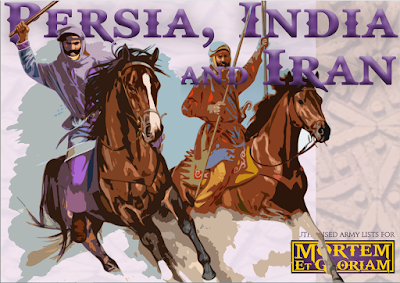 This is the first battle report from the event called WinterCon 2018 that took place in Canberra on 21-22 July 2018. There were quite a few tournaments for various games and system. Luckily Dean from Olympian Games organized one for Mortem et Gloriam enthusiasts.

It was quite relaxed, open format tournament where participants had to bring 10000 strong armies. Other than that there were no restrictions and we played 2 games each day. It meant that we had quite a lot of time for each game. It was good news for many of us who have only recently started learning the intricacies of the system.

If you are interested, here is the video from the event that nicely shows what games were represented. For MeG players the interview with Dean will definitely be an interesting one (MeG contents starts around 24:00 minutes):

WinterCon 2018 Coverage - by Garage Gamers Down Under

In my first game I was about to play against Paul for whom it was the very first game in Mortem et Gloriam. It was my pleasure to try and pass on all the things I have learned in my few games so far. Paul brought the army of Classical Indian which he painted beautifully in just a few weeks time! I have never had a chance to play against such a force before so it was becoming more and more interesting. Especially, that one can imagine that it was one of the historical campaigns of the Seleucids in the East.

Here are more details of the army Paul brought. I must apologize in advance as I realized I made some mistakes in the diagrams. First, I considered a single TuG as two (I think they were Javelinmen) and then I noticed that I did not add one TuG (it appeared on the diagrams at some stage). I also tried to recall which infantry units were actually present so I hope the list is acceptable in terms of following the flow of battle. If I get the correct version I will definitely update it accordingly.


The first thing that I noticed is that there are so many bows in this army! I guess we would fight in shade :) Paul obviously had numbers superiority too. In such circumstances my plan was to try and deploy on one flank thus reducing the advantage in number of units grants to my opponent. Try to get into combat as soon as possible to avoid losing bases due to shooting. And have a small reserve force to delay the enemy units approaching from the opposite flank.

It was very general and quite vague plan but in the situation where I was about to fight against Classical Indians for the first time, I did not think I can come up with anything more elaborate. In addition to that, and based on my most recent experience, I also wanted to avoid getting my cavalry anywhere near the elephants!

In comparison to the army I used in my last game, I made some small changes. Here are the details of the army list:

I reduced the numbers of Thracians and Cretan Archers in order to be able to upgrade one of the cavalry units to Companions. I was not able to finish painting them in time for the event but they made their debut anyway.

We ended up with a few pieces of terrain but somehow it all ended up on the edges. It was not too bad but at the same time such a clear and open space was a bit worrying against all these bows.

The good thing was that I managed to out-scout the enemy and I could see where at least some of the units Paul had would be deployed. I also chose to be invading player so that I could start reducing the distance between the armies first.


I really liked the look of Paul's army. He also had nice color counters to indicate under the command of which commander particular unit is. In addition, he had removable flags in corresponding colors that he could easily place on each commander base. Very neat idea I am thinking about incorporating myself!

I think the Chariots and units on the left flank were deployed first. It was the time when I had to decide which flank to focus on. On one hand, the Chariots and the Cavalry would not have their bonuses against Pikes. In addition, with smaller amount of bases they should be a bit more fragile while it would take the infantry longer to outflank my force. On the other hand, the Chariots are Superior which would negate the advantage a bit and could potentially keep avoiding the Pikes to buy time for the infantry.

In the end, I decided to go for infantry instead and see if I can get there fast enough while my cavalry would try and slow down half of the enemy army. I positioned one SuG in a single line to protect the Phalanx from being shot at. At the same time I had my Tarentine, Cretan Archers and Javelinmen in front of Elephants so I hoped I would be able to do some damage before inevitable melee.


Seleucid Phalangites marched at a double towards their enemies. Some of the Indian units advanced as well, no doubt to get ready to shoot at the pikemen. Skirmishers at the center also moved forward, watching the Elephants carefully.

At the same time some of the Indian units on the left flank started to move but it seemed like the Indian commanders had trouble in coordinating their advance.


The armies kept closing the distance to each other but Indians visibly had more and more trouble in bringing the units from the left flank fast enough. While Seleucid Phalanx marched towards the enemy infantry relentlessly and it was about to clash against it.


(Edit: This is where I realized I have made a mistake in terms of presenting the units on the diagram. I did not include Archers A3 before. It also seems that Javelinmen J1 and J2 are actually 1 TuG. I decided to continue, however, as adding a missing unit is a quick fix, while correcting the maps for previous turns is not. My apologies for the inaccuracy.)

Seleucid Phalangites, led by Argyraspides, hit against the thin line of Indian Spearmen. They held for now but they took casualties and Pikemen started reaching more vulnerable Archers. Nearby Thracians routed skimirshers and had free reign on the extreme flank now.

The Seleucid skirmishers did a good job at avoiding Elephants and even managed to shoot one of them down. At the same time the cavalry was withdrawing in order to attract the attention of another group of Elephants and take them away from the flank of the Phalangites.


The Indian commanders unleashed the Elephants. All three groups attacked. However, one was intercepted by the Phalangites and got locked in combat. The second, already damaged, received another concentrated volley of arrows and javelins and it was too much for poor beasts. Only the third one clashed with the enemy cavalry but surprisingly, stubborn Companions kept fighting.

With the attack of the Elephants contained it was now time for the Phalangites to push hard and they broke their enemies. Not only the right flank was routed but the way towards enemy camp was now wide open!


Seleucids pressed the advantage on the right flank. Phalanites engaged with the now isolated unit of Archers while Aryraspides moved towards the enemy camp.

At the same time the units in the center were busy with holding up the advancing flanking force of the enemy. Line Cavalry and last unit of Phalangites managed to do it quite well, forcing Indian Chariots to maneuver around their infantry and further slowing them down.


Seleucid Companions fought valiantly and in the last effort, led by their commander, managed to hold against Elephants long enough to allow other units to break through again (Edit: We managed to inflict that last wound to break the enemy TuG at the same time so both Elephants and Companions were gone).

Phalangites routed badly outnumbered Archers and when Argyraspides sacked the enemy camp, the battle was over. The Indian commanders had to withdraw and Seleucids emerged victorious.

I would like to thank Paul for a fantastic game! I wish I played like him in my first battle, despite playing at 7000 we didn't even get into a proper fight before we run out of time. I would also like to thank him for the inspiration as his army looks truly beautiful on the battle field and I really like his ideas on how to indicate which unit belongs to which commander. I am definitely getting closer and closer to fully painted army to the appropriate standard and thanks to such opponents as Paul I have even more motivation.

I was obviously very happy my plan worked! I had a lot of luck with Companions holding on against Elephants so long and even breaking each other at the same time. Fighting only half of the enemy army also helped and we had a good discussion with Paul about that. His units on my left flank just could not get there in time, the cards were never good enough to push them forward. And once they started moving individually it was even more complicated.

That makes me wonder if I should go after that flank anyway. The enemy infantry didn't stay long against Phalangites despite having larger number of bases. But as I mentioned before,  the Chariots and Cavalry would have been able to hold or even move back to avoid contact until the infantry was there to help.