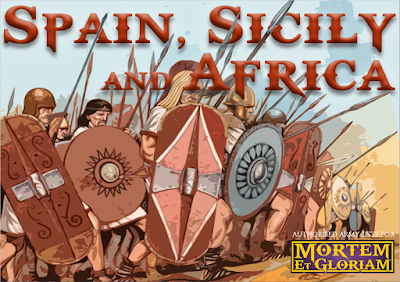 In the last game of WinterCon 2018 I played against Mitchell and his Spanish - Sertorian army. I remembered him from the very first event I took part in but back then I had no opportunity to play against him.

Spanish - Sertorian is another faction I have had no opportunity to play against before so I was very curious about it. I vaguely remembered that it may be an army that has a mix of Iberian and Roman troops, perhaps with a bit of cavalry and skirmishers too. It was also the very first time I was about to play against the army with Legendary Professional Army Commander - Sertorius himself!

Here are the details of the army list Mitchell had (at least as I remember it):

It is a very intriguing army from my point of view, because it has a larger percentage of infantry skirmishers than I have faced so far. I was very curious how Mitchell was about to use it in our game. I hoped to learn a bit from him because I the way to use infantry skirmishers is still a bit of a challenge for me.

Another intriguing element was that the army had quite a large number of Javelin armed units. Combined with the fact all of the infantry TuG's were Loose, it probably meant they would prefer to fight in some kind of terrain and thin the enemy a bit before the inevitable melee.

At the same time there was only single TuG of Cavalry supported by 3 SuG's of Javelin Armed Light Horse. I was not sure if that gives me a bit of an advantage when cavalry is concerned or not really.

Last but not least, I noticed that the army has even lower break point than mine but something told me that going through all these skirmishers to get to the TuG's would not be easy at all.

On one hand I wanted some terrain and narrower battle field to be able to protect flanks better and give less space for the enemy to maneuver. On the other, too many terrain pieces, especially of rough type, would benefit my opponent and his troops used to fight in such terrain.

We ended up with secure flank in Mountains side and a few rough terrain pieces. Fortunately for me, none landed somewhere in the middle where it would be a problem.

I am not sure at the moment but I think I managed to out-scout Mitchell. However, if I did, then I did not get much as he deployed mainly his skirmishers that did not give away his plans. He did, however, keep his light cavalry in reserves for a flank march!

Unsurprisingly, Mitchell deployed some of his units in rough terrain and his camp was nicely protected thanks to that. The units that ended up in the open were a bit further back. I assumed that it was because he was not yet sure when the flanking units may arrive so any delay before the combats would be good. In addition, if he could shoot at my advancing units a bit longer it may help thinning my army a bit too. Always a good thing.

I decided to keep my infantry close to each other, with Javelinmen on the left flank and Cavalry on the right. Which is where I expected the flanking force to arrive too (I believe we came to the conclusion it would not be able to arrive from the opposite flank and Mitchell chose my right).

The plan was to move Phalangites across the battle field as quickly as possible, use Javelinmen to distract enemy skirmishers and Thracians to potentially engage enemy in the terrain. At the same time, the Cavalry was to protect the opposite flank and perhaps fight against the counterparts.

The flanking force arrived early although instead of three units, only two showed up (Edit: We realized that as the commander of flanking force was Mediocre, he could command only 2 SuG's). However, it was already enough to divert the attention of Seleucid cavalry.

The infantry lines approached each other but Seleucids had some problems in keeping the same pace. With cavalry moving to the right a dangerous gap started to build up in their formation.

Seleucid cavalry attempted to engage with the enemy but Spanish light horse kept safe distance. It allowed more of their units to converge upon the Seleucids, especially that they become quite isolated now.

The rest of the Seleucid infantry advanced as planned but as a result, the flank of the Phalangites was not protected and Romans moved in to exploit that.

It did not start well for Seleucids. Their Line cavalry attempted to charge Light Horse again but the storm of Javelins was so accurate that they never made it. That complicated the situation for Seleucids on the right flank a lot.

Then Phalangites tried to reach their enemies but again, due to the Javelin fire they had to slow down their attack and could not yet make contact with the foe. Only when Romans attacked themselves, could Phalangites execute a counter charge to meet them head on.

The fights erupted across the battle field. Companions chased away one of the Light Horse but it was a mistake. They were now being chased by the enemy cavalry.

Phalangites in the middle did better as only Argyraspides could not engage any foe. In particular in the center, good maneuvering allowed two units of Phalangites surround Spanish Nobles. They fought bravely but were outnumbered and in a very inconvenient situation.


Companions and Tarentines got outmaneuvered and paid ultimate price as the enemy caught them (Edit: During the game we calculated the claims for the fight between Mitchell's cavalry and Companions incorrectly. It was due to my mistake and Companions survived the battle. If we did that correctly they most likely would have been destroyed. Hence, in this report I described the situation as if it happened. My sincere apologies to Mitchell for my mistake.)

On the opposite flank, Thracians decided to charge the enemy rather than to be shot to pieces and managed to inflict substantial damage before they too were defeated.

The Phalangites, however, were grinding through. Spanish Nobles were defeated and that allowed two units of Phalangites to maneuver to both sides to aid their companions. One unit was getting ready to outflank the Romans, the other to join the fight against one of the enemy infantry blocking the path to the camp.

However, the fight took longer that both sides expected and armies disengaged before the night fall, with Spanish army withdrawing after sustaining fewer casualties than Seleucids.

Many thanks to Mitchell for a great and interesting game and apologies for my mistakes! Congratulations for taking 3rd place too!

I really enjoyed our battle and it is a shame we could not play one more turn. We had shorter period of time for the last round as the whole event was coming to an end.

It would have been very interesting to see the result of the sixth turn as one hand I had a chance to break two more TuG's to reach army break point. On the other, I was only one unit away from breaking too and I was sustaining casualties too.

Flanking attack was a very intriguing element of the game and I think I did not prepare for it well. It worked well for Mitchell as it distracted me and made me react to his movement. I diverted whole cavalry that in turn prompted more aggressive advance of the infantry in the center.

Looking at it with the full benefit of hindsight, I should have sent Tarentines to slow down the Light Horse. In the meantime, use Companions and Light Horse to engage both, Caetrati C4 and Cavalry. Caetrati are Loose so my cavalry would get better dice when fighting them in the open. While the fight against Cavalry would simply keep them busy. In this way, I think, the right flank would have been better protected.

My further mistake with Companions chasing the Light Horse was a consequence of bad decision earlier and reacting to the untimely demise of Line Cavalry. Not a good decision at all.

I was quite impressed by how important slowing effect of fire was in this game. It seems to be quite easy to slow down the TuG with two BW frontage as even a single hit slows it down. Perhaps I need to plan the distribution of cards better, to take into account such events.

I definitely should have maneuvered better too and start with a slightly better deployment. If I were to play the same game again, I would have positioned Cretan Archers on the left flank of the TuG they were attached to. In this way they could shoot at enemy skirmishers and protect Thracians from the incoming fire. In addition, Phalangites would be shifted towards the center a bit more to avoid the terrain on the left that rendered Argyraspides useless. And allowed Phalangites to engage the enemy in a more unified frontage.

This report concludes the series of reports from Mortem et Gloriam tournament in the frame of WinterCon 2018. I would like to thank Dean from Olympian Games for organizing it, thanks to his efforts we had a nice number of participants too. I hope it is just the beginning!

I would also like to thank again all my opponents, Paul, Craig, Rob and Mitchell for fantastic games!  It was great meeting them and playing against their beautiful armies. I greatly appreciate their patience and the fact they did not mind me using WiP army. I am working hard to get it to the right standard!

I got a lot of motivation for painting and modelling from my opponents and I hope that I will be able to field equally nice looking army soon.

There is no doubt I also learned a lot. I noticed that I can be quite reckless with cavalry and Thracians and that was often the reason I lost. After all, these three TuG's are more vulnerable and with breaking point 4, it may quickly lead to a defeat.

I am fortunate that there are a lot of potential opponents to play against and one of the reasons I attended the event was to meet new people. Now it is more about finding enough time to play and to keep painting fast enough. I definitely enjoy the system more and more and I noticed I keep thinking about a bit more advanced elements than before. For example, what terrain would be beneficial for my army, how to get prepared for events when I am out-scouted and how to use the advantage of out-scouting the enemy.

What I would like to achieve eventually is the ability to deploy well, be able to form the right blocks for particular encounter and use the fact I have drilled troops to their full potential in their maneuvers. That would make the reports from the games more interesting for sure!

Thanks for reading!
Posted by Swordmaster at 22:52