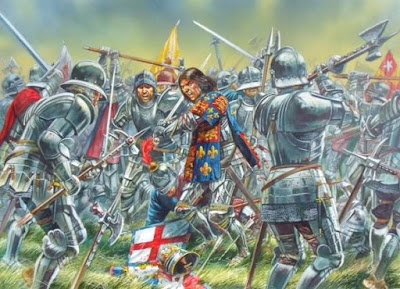 After a few games using Trident Realms, Jeff decided it is time for a bigger change. He chose Brotherhood and on top of that he also decided to use one of the available formations for this faction - Last Stand.

I didn't know what exactly Jeff is going to bring but he gave me a little spoiler. There will be no cavalry unit in his army.

That was very intriguing. I have already noticed that Jeff designs his armies in a unique way but this sounded like bringing the game to a completely different level! I also knew it is a trap!

20 Order of the Brotherhood on Foot, Headstrong, Valiant, Crushing Strength (1)

If you have not noticed that Jeff likes Hordes, this example should convince you already! Quite a lot of bodies to go through. Villein Martyrs may not be the best fighters in the world but they cannot be wavered and with either Foot Knights or some of the heroes nearby, the value of nerve is -/23. They also sport regeneration and although it is 6+ only, it is definitely worth having anyway. In addition, three hordes of the same type means that even if you rout one there are two more to take its place.

Order of the Broterhood on Foot was also Fearless in this army thanks to the Last Stand formation. They bring a bit more of melee abilities to the army but have respectable nerve value on their own too.  To further improve the offensive capabilities of the army Jeff added a horde of Plowshares. They may not hit often, they have little armor but 30 attacks with Crushing Strength (1) will always do the damage.

When I heard that there will be no cavalry units I expected that there will be Monsters instead and I was not disappointed! There were three of them, each with upgrades of Breath Attack and Ensnare. That is a very good addition to the army, as Beasts provide quite a lot of much needed flexibility. They can fight and can find their way to melee easier than big and clumsy units. They can also attack at a distance with 18" radius of effective range.

The selection of Devotees and Exemplars further added to the army with some Inspiring Presence, Heal abilities and in the case of Exemplars, anti-flier options too.

It was a very resilient army that would also be hard to outmaneuver because it can spread across the table and still have elements to cover the back of the formations or intercept the flankers. I decided to try shooting at a unit and then charging in when it is weakened. Simply because wide frontage allows to put 3 units of my own against it. If already weakened it should be possible to break through.

Although I expected counter attacks I also assumed that I would need to perform some frontal charges simply because I could not expect the safe landing zone behind enemy lines for the drakons. Hence, I had to create breaks in enemy formation myself.

I used the same army as recently and here are the details for the reminder:


As usual when playing on UniversalBattle2 we used maps created by EpicDwarf and this time we got Map 3.

We got Scavenge as a scenario and I think I have not played this one for some time. It is quite intriguing because one can generate loot but it does not mean the opponent cannot do it later as well. In addition, slowing down effect of loot tokes is always a problem for me.

Hence, my initial idea was to slow down the advancing army of the Brotherhood so that there will be less time to generate loot tokens. In order to do that I also wanted to make sure that the tokens are spread a bit, as they can potentially end up on one half of the battle field. It would definitely be advantageous for Jeff's hordes.

I also wanted to use my idea of focusing all the shooters on a single target and then attacking it so I deployed all my bow armed elements on the left. If I could inflict enough damage by shooting, I should be able to create a breach on the flank. And open the passage for the Drakons.

Another plan was to move units in the middle fast, let Palace Guard troop generate the loot and start back pedaling while the rest of the units slow down the enemy. And last not not least, seeing fewer units on the right, I wanted to use my greater speed and maneuverability to surround and destroy Villein Plowshares. In addition, that should give me the control over that area and perhaps generate one or two more loot tokens.

Elves moved towards the enemy as planned. The units on the left opened fire and Villein Martyrs suffered some damage already.

Brotherhood army advanced towards the enemy as well. Interestingly, constant prayers of the Martyrs and the magic of the Devoted completely healed all the wounds suffered due to Elven bow fire!

Elves had to adapt their plan quickly as the unexpected healing abilities of the enemy already proved to be a problem. All units moved back a little and Elves tried again to shoot at their foe.

Once again the power of prayers and magic combined proved very effective. What is more, Forsaken Beasts unleashed their own fiery breath attacks at the Palace Guard that did not withdraw far enough. It seemed like the army of the Brotherhood was quite literally fighting fire with fire!

Since the ranged attacks did not work, Elves decided to engaged the enemy in melee. Spotting the opportunity, three Elven units attacked one enemy in the forest. Unfortunately, this attack was not successful as the enemy held.

The cavalry in the middle attacked the beasts mainly to distract them and allow the Drakons to land behind the enemy lines without the risk of being shot at.

It was soon clear the Elves miscalculated badly. The unit of Martyrs attacked Sea Guard but by doing so, also opened a path for the second horde to smash into Palace Guard. Thus all three units could counter attack. Miraculously, however, Palace Guard regiment held its ground!

In the meantime, both Exemplars charged Drakon Riders and both managed to ground their reslective adversaries.

Elven shooters moved back again and shot one more time at the advancing Villeins. It was a very difficult task because whatever damage was inflicted seemed to be healed soon after.

Sea Guard and Palace Guard also attacked their adversary in the forest and yet again the enemy held!

Only the units on the right flank noted a success when they managed to rout isolated Plowshares on the charge.

It was time to deliver killing blow and Brotherhood units did it well. Four Elven units perished and it was clear that the Brotherhood army gained advantage impossible to swing back.

Elves were in a desperate situation and had to fight to survive. Silver Breeze cavalry could maintain the distance and kept shooting at the advancing enemy infantry.

Drakon Riders moved away from the enemy too but at slower pace in order to avoid being intercepted by numerous units of the Brotherhood.

Only Drakon Lord attacked but even he failed to kill one of the Forsaken Beasts, despite the fact it was already wounded.

Villeins, now in secure positions, dominated on the left flank. They even started extracting treasure from the hidden mine that was located nearby.

There was very little Elves could do now except attack here and there. Silver Breeze units still shot at the enemy but it was too little to make any difference.

Drakon Riders attacked Exemplar but he stood his ground. Only the Prince managed to kill one of the beasts, finally!

With no real threat present, Brotherhood army consolidated positions and obtained more loot. One of the Exemplars hunted down the Drakons too as his personal quest.

Congratulations to Jeff for another stunning victory! Who would have thought that the Villeins are so resilient! The combination of Regeneration and Heal meant that I had to abandon my plan completely and it showed. I could not come back with a good alternative quickly enough and when I received powerful blow in turn 4 it was very hard to even make an attempt to save a draw.

My first thought was about the plan in itself and I think the idea of shooting at a horde, charging it and thus creating a break in enemy formation may not be a bad thing in itself. But I need an alternative when the enemy has a way to negate the effect of ranged attacks.

Perhaps placing the shooters in the middle and trying to aim at the units there would have been a better idea. I could still have some units on the left to slow down the advance of the Brotherhood.

There were a few mistakes in positioning of the units too. For example, I left Palace Guard Regiment too close and they got fired by Forsaken Beasts. I think it was not a good idea to move towards them in the first place as I did not generate that token after all anyway. That prompted me to risk the charge in the forest as I knew Palace Guard would not survive second shooting. It created quite hilarious situation where first Jeff, then I rolled double 1's for nerve checks! But in the end, I made a mistake and there were consequences.

The same with the Drakons. Both units landed to threaten the flanks. However, the one on the left was easily intercepted and I didn't have enough room for maneuver anymore. While the one on the right was easily stopped and then attacked from the rear. I should have position them facing left first. Even after the charge of Exemplar, I should have reformed them to face the Foot Knights, as that at least gave them a better chance to survive. And better still, I should not have landed there at all as it was not yet a good place to be.

I think the game like this reminds me that I need to have a better plan in terms of securing the objectives of the scenario. I focused on routing the units as I believe I should do it in order to create the opportunities for my units to claim tokens. But it seems I should equally focus on preventing the enemy from getting them fast enough and perhaps more on collecting some treasure myself rather than fighting alone.

Thanks for reading!
Posted by Swordmaster at 17:00