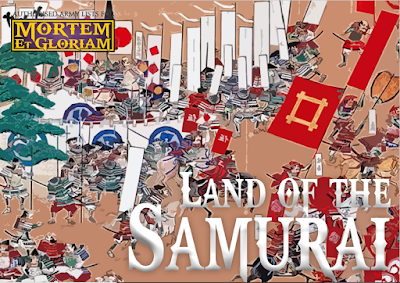 First game of the third and last day of Mortem and Gloriam tournament during MOAB 2019 was against both, a new opponent and a completely new army. This time I had a great pleasure to play against Pat and his beautifully looking Muromachi Samurai.

Pat's army is almost finished but looks great already! I like his way of distinguishing between units under particular command. He has magnetised standard bearer with a different colour of a banner that he attaches to the front rank of each unit. In this way he can switch between commanders accordingly and it makes the units even more visually awesome! I wish I was able to take proper photos of his fantastic army.

I have seen a few Samurai armies but I have never played against one before. It was interesting to notice it is another army with as low breaking point of 4 as mine. It had fewer units too but mainly because all but one, superior cavalry of skilled Bushi, had 9 bases each. However, they also had mixed elements, with the first rank formed by superior Samurai and the rest of the unit comprised of Ashigaru.

Here are the details of Pat's army: 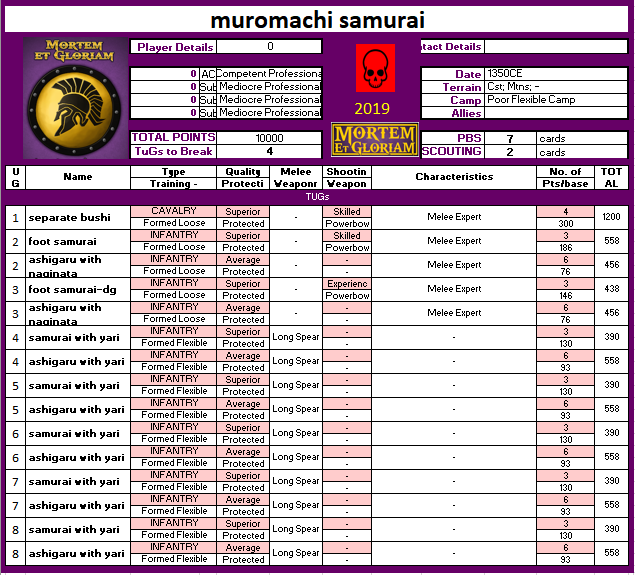 Finally the army with less shooting! It does not mean it would be easier to fight against it, but at least I would worry less about the slowing effect of fire that was so difficult to overcome in all my games so far.

There is still very good shooting present, especially that the units were skilled and equipped with powerbows. Not good new for my cavalry in particular.

I was not sure how good the infantry units are but I decided that I need to get into melee anyway. And treat them as any other mixed units. Meaning that if I get through the first rank then I should gain sufficient advantage to be able to win the war of attrition. However, as this time opposing units were larger than my Phalanx, I needed to send two versus one to achieve that.

We had mountains as a secure flank in this game and once again, I was an invader. We had a few more pieces of terrain but fortunately, the one that was rough ended up in my deployment zone. I decided to deploy the phalangites in it anyway as I could move out of it early in the game and it did not affect the battle line formation before the inevitable melee.

This time I deployed Phalanx closer to each other and placed Cretan Archers in between so that they could, hopefully, cause some damage on the front rank of the Samurai units. I kept two Charging Lancer units as reserves and to protect them from the possible bow fire. Only Companions were placed on the left, opposing Bushi, because the effectiveness of the shooting would be limited a little against superior TuG.

Fast cavalry was initially deployed on the right flank of the formation to see what exactly battle line going to be for the enemy force. As usual, their main task is to harass the approaching forces and slow their advance.

Seleucids sent Terentines and Cretans to shoot at the advancing Samurai but also move the Phalangites forward. At the same time Companions were also ready to counter Bush cavalry while Horse Archers on the right flank moved to begin slowing down the enemy deployed there completely on their own.

Samurai decided to chase off the annoying skirmishers but in doing so their formation became uneven. The Bushi cavalry also performed a retreat but their bow fire did not bring the expected results.

Both battle lines were now very close to each other and first charges were about to commence.

Seleucid Phalangites lowered their sarissas and charged the Samurai who met the attack head on. Vicious fight erupted and both sides started suffering casualties. It was thus important for Seleucids to try and find a way to shift the balance to their side. Such an opening was created by the Companions who pushed back Bushi cavalry and were now in position to attack infantry line of Ashigaru from vulnerable direction. This manoeuvre was further protected by the Thracians and Charging Lancers advancing to the gap created on the left flank.

Knowing they are going to be protected by from the attack of Bushi cavalry, the Companions charged in against Ashigaru. That powerful attack routed the badly damaged unit and caused panic in the one next to it. Seleucids have just achieved an important breach in the Samurai battle line and were in position to continue outflanking manoeuvre against other units locked in melee with the Phalangites.

Seleucids used the opportunity to widen the breach in Samurai battle line. Charging Lancers kept pushing back Bushi cavalry who opted to shoot and withdraw rather than to fight. This allowed two Phalanxes to keep advancing towards the enemy camp.

In the meantime, Companions manoeuvred to position for another attack against enemy locked in melee with the Phalangites.

Yet again Companions proved they are deadly when allowed to attack from the flank. Another group of damaged Ashigaru was not able to hold against the charge of Seleucids elite cavalry. The momentum carried the Companions into the flank of fourth unit of Ashigaru who has just been attacked from the front by Silver Shields.

Seleucids' skirmishers unleashed another volley at the advancing Samurai and once again they slowed them down.

Charging Lancers joined Silver Shields and Companions in their attack against Ashigaru and Seleucids' forces managed to rout this enemy unit as well. It was enough for the Samurai army which withdrew from the battle field conceding a defeat.

I am also sorry for Pat's bad luck with his Bushi cavalry. Even when average Charging Lancers were chasing them he could not score much on yellow dice. I was prepared to sacrifice this unit to give time for Companions to attack rear/flank of the enemy units but that was really unexpected.

I am obviously very happy with the result but mainly because I managed to make the plan to pin the enemy with pikes and hit it with cavalry work. The Phalangites did great in inflicting the damage already but they suffered some as well. If this fight continued, it was not a guarantee they would have even survived. Not to mention routing the enemy on their own.

In addition, Companions could use their very good position to attack more units and that was like a chain reaction. At the same time, the units on the right flank were doing a good job of slowing down the reinforcements.

I need to find out the way to replicate such situation in my future games. I also think if Pat received a charge of Companions with his Bushi, the game may have ended differently. So I need a plan to create such a breach with my units. I hoped the addition of Thracians would have helped but they were to slow to catch the cavalry, not to mention attack from the flank.

In any case, I was happy to see such plan has a chance to work!

Thanks for reading!
Posted by Swordmaster at 21:40