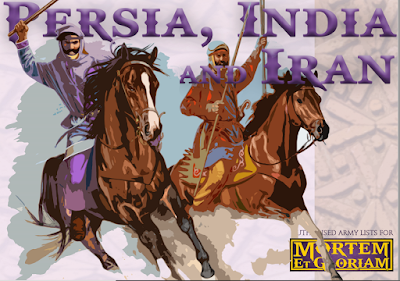 In the middle of October I attended a gaming convention called MOAB (Mother of All Battles) where I played 6 games of Mortem et Gloriam. MOAB is a well known event for Australian players but for me, it was the very first time I attended it.

There were many other games and systems played over the 3 days and it was quite a busy event. Mortem et Gloriam attracted total of 12 players which I am told is a huge improvement from the last year.

This tournament was very special also because the author of the game, Simon Hall, was participating! And guess who was my first opponent in the very first game? Simon Hall himself!

I was really happy I got lucky to be the first opponent for Simon, even more so that he brought his beautifully painted Classical Indian army. Thanks to that we had quite a historic match up, Classical Indian vs Early Seleucids.

Although it was not my first encounter with this particular faction, this army looked different to what I had a chance to fight against in the past. The common element, however, that it also had a much larger number of units and significantly higher breaking point. Here are the details of the army list Simon brought to MOAB. 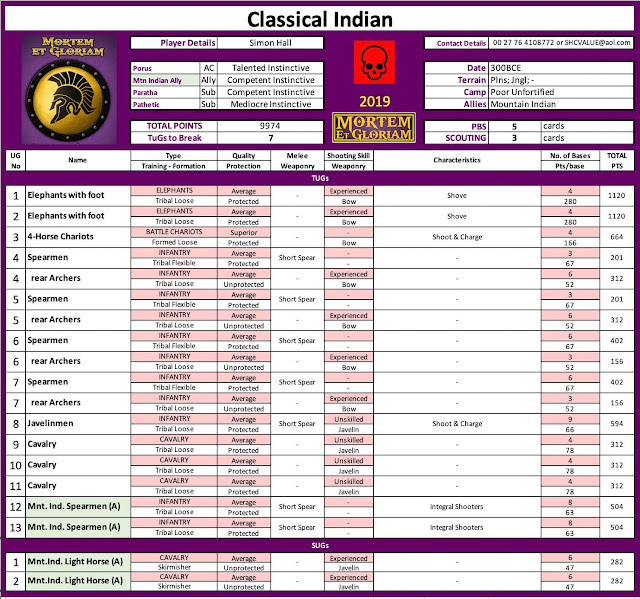 It was a very interesting army from my point of view because it was a really combined arms force. At the same time, I was very curious how such a numerous force can be commanded with the same number of commanders as mine. Last but not least, it was obviously an army that represented a completely different style of fighting to the one I had. Such encounters are always a guarantee of a very interesting battle, where both players try to play to the respective strengths of their forces.

Based on my previous experience, I knew I needed to get to the fight quickly, preferably on one flank. The phalangites have substantial advantage over Indian infantry and even Elephants may be routed if engaged frontally.

However, there is a constant threat of being outflanked. In general, I could assume Simon would try to delay that advance, especially with significant amount of shooting.

In this game we had a secure flank with a few additional features of the terrain that affected closed formations but not the loose ones. Another important factor I had to consider as I was not able to use terrain to cover the flanks of my advancing units while Simon's force could traverse these with easy.

I do not recall any significant out-scouting effects in this game. In the end, regardless of the effect, due to significant difference of the numbers of units in both forces, I deployed my army first before Simon had placed all of his TuGs and SuGs.

Simon deployed his force in four distinct groups and I wanted to get to the biggest one in the middle while avoiding the ones on the flanks if possible. Due to the terrain, I split my force in two with the intention of combining the advance of the two phalanxes. The cavalry on the left and Thracians on the right were tasked with flank protection. However, I also had to take into account the placement of Elephants and that's why splitting the army in two parts was the plan to do so.

In this game I was the defender.

The Indians kept their centre of the formation motionless and allowed the Seleucids to move towards them. Seleucids, however, aware of the two groups on both flanks already manoeuvring to envelop them, advanced at a slower pace and kept unified battle line.

The two groups of Indian forces on both flanks drew the attention of Seleucid units. On the left, the Phalangites stopped to observe the manoeuvres of their enemies while on the right Thracians and Taterntines moved to stop their foes.

The central formation of the Indian army also advanced towards Seleucids, who no longer could maintain a single battle line.

Although it looked like Seleucid Phalangites on the right were close enough to clash with their enemies soon, it was just a diversion. Indians advanced only to unleash the volley at their foes and quickly withdrew to increase the distance.

At the same time, the Phalangites on the left split so that one group would reinforce the defence of the flank while the other kept advancing towards the centre.

Indian army continued its skilful defence in the centre. Their shooting was consistently inflicting damage on the advancing Seleucid forces and significantly slowed it down too.

The first fights erupted on the right flank where Thracians engaged in a melee while Tarentines attempted to protect them from the envelopment.

Seleucids forces attempted once again to catch their fleeing enemies but with no success. In fact, Charging Lancers got intercepted by the infantry attacking from the difficult ground instead.

The skirmishers in the centre were suffering casualties and although the inflicted some on their enemies, they were losing the duel.

Surprisingly, Silver Shields managed to catch Indian light cavalry and got closer to the enemy central formation. At the same time, one of the Indian Spearmen units chased away Seleucid skirmishers as well.

Seleucids managed to engage Elephants on the left with one of the Phalangite units. However, their battle line lost cohesion by now. Many gaps were now being exploited by the more numerous units of the Indian army.

The long march, sustained casualties due to shooting and lack of cohesion of the battle line started costing the Saleucid army dearly. Although the soldiers fought bravely and started girding through the enemy ranks, the army lost the fight on the right flank.

What is more, it also lost two units on the centre left where Charging Lancers were not able to rout the Indian Spearmen early enough to rescue the Phalangites attacked by the Chariots.

Seleucids did not manage to defeat the Elephants on the left before another unit hit the flank of the Phalangites. Although Seleucid units inflicted substantial damage elsewhere, they were not able to hold their ground against this attack.

Seleucids conceded defeat and withdrew before the total annihilation of their army.

Many thanks to Simon for a fantastic game and congratulations on the stunning victory!

It was absolute privilege to play against and learn from the author of the game. I tried to observe his moves throughout the game and it was a great opportunity to learn by doing so too. It was always evident that he moves his units with the purpose, that there is a plan to realise and all the actions were planned a few moves ahead.

I really like Simon's plan to lure my forces in the centre by advancing his formation in the middle, only to skilfully withdraw them. In this way he had more time for the flanking units to envelop my army and to shoot longer at the advancing units. As a result, when the fight in the middle finally occurred, the Phalanx was already depleted and did not have enough time to grind through the opposing units.

What is more, I started reacting to his moves as well. I sent Companions on a wild chase, taking away an important asset from the fight that mattered. I allowed one units, Thracians, one Charging Lancer and two Phalangites, to be outflanked. These were grievous mistakes as I lost all of these units and in the end that cost me the game.

The important lesson here, however, is that Simon's actions forced these mistakes. They did not occur due to some random action or coincidence.

When I analysed this battle some more I concluded I still needed to go into the centre to have a chance to win. I do not have units in loose formation to fight in the difficult terrain. So it was matter of being able to engage fast and protect the flanks, as initially intended.

I wonder if deploying the Silver Shields and Phalangites group near the woods in my deployment zone would have been better. I could then use other units to protect the flanks better and perhaps use all Charging Lancers as second line reserve too. Then use light cavalry to engage their counter parts instead and avoid that many casualties due to shooting. I think in this way I would have had better chances to maintain cohesion of the phalanx as well, which was important for the inevitable melee.

Once again, many thanks to Simon for a very enjoyable game!

Thanks for reading!
Posted by Swordmaster at 22:36