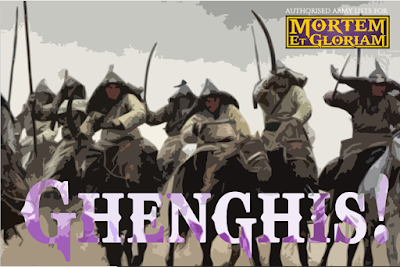 In the third game of the Mortem et Gloriam tournament during MOAB 2019 event I played against one of my regular opponents, Paul. He was also very kind to offer me a lift to and from the event, which I am extremely grateful for!

Paul brought a completely different army this time, the one I have never played against before - Josean Korean. I must say I did not really know what to expect.

However, Mortem et Gloriam as a system allows even inexperienced player to assess basic roles of each units, regardless of the army and period. Hence, I decided to keep it simple and think about Paul's army in the generic terms. Based on that he had a very well balanced army with the shooting infantry that also had a front rank of polearm wielding warriors. He also added some more units equipped for ranged attacks alone. But he had a strong contingent of cavalry as well, with three TuG's of Charging Lancers and two TuG's of skilled bow armed horsemen. Here are the details of his army list: 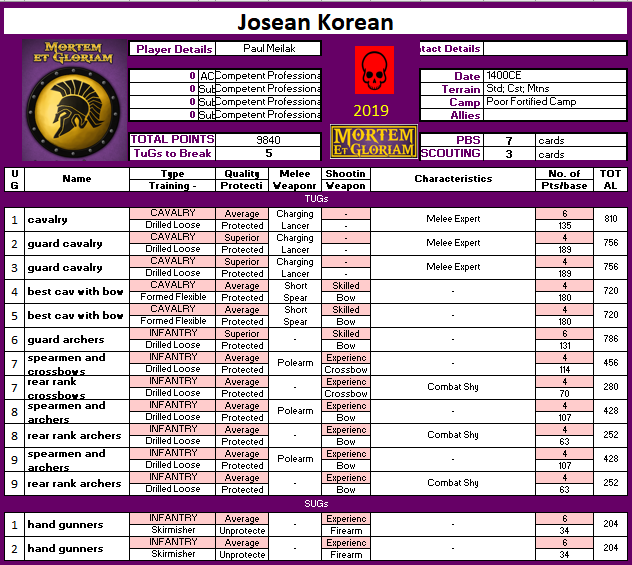 After closer examination it still looked like quite a shooty army for me. Interestingly, it had the same amount of units in total but had breaking point 5 due to one more TuG. Skilled mounted bowmen looked dangerous, especially for my small units of cavalry. In this case, once again, I would need to make sure Phalangites would get to the melee quickly and that they do not sustain too much damage in the process.

Once again I ended up as an invader. I was quite surprised Paul did not want much of the terrain in this game. I thought empty battle field benefits my units but then I realised that it means open ground for shooters and good space for cavalry to manoeuvre.

Considering the most recent experiences in game one and two, where I had to fight against considerable amount of enemy shooters, I decided to use Cretan Archers as a buffer to help Phalangites to arrive to melee in better shape. It should also help me to shoot back at the enemy while advancing.

I deployed light cavalry in the middle of the battle field as I was not yet sure where the enemy is going to be. In this way I wanted to have the flexibility to move them where they are needed the most. Then, seeing the enemy cavalry on the right I also placed my own in the right centre to counter them.

The Phalanx begun its march towards the enemy. Some of the opposing units, in particular the shooters, advanced as well to be in range earlier.

At the same time Korean cavalry also moved forward and Seleucid Charging Lancers moved towards the right flank to intercept.

While phalangites continued their march, the enemy started spreading its formation. On the left flank the cavalry begun the outflanking so one of the Phalanxes diverted towards the left to counter that.

On the right flank the Companions and one of the Charging Lancers groups moved in to attack one of the enemy infantry units. It looked like its thin formation should be possible to break and if that happens, they should be able to breach enemy battle line.

One unit of Phalangites made it into melee but others had to still manoeuvre. Thracians were running away from the enemy cavalry as they did not want to get caught in the open.

The skirmishers in the middle of the battle field were conducting successful exchange of fire with enemy handgunners and bowmen. Unfortunately for Seleucids, their cavalry charge failed to break the enemy and they were about to get hit in a flank and rear by the mounted foes.

As expected, even Companions were not able to hold against the charge from vulnerable direction and Seleucids lost two out of three cavalry units. The third one charged enemy lancers alone and it was clear it is just a matter of time before it is overwhelmed as well.

It was thus crucial for other Seleucid units to get into melee and start routing enemies fast.

Seleucids doubled their efforts and noted some important successes. Careless cavalry on the left was intercepted and destroyed by the phalangites. One of the group of Hnadgunners was routed and nearby Bowmen were on the edge of breaking.

Unfortunately the other Phalanxes remained locked in melee while last Charging Lancers were not able to hold off the enemy cavalry and the road to the unguarded camp was now wide open.

Despite the best efforts, Seleucids managed to rout only one more enemy unit. Two infantry groups that were fighting Phalangites were very close to breaking and one of the enemy cavalry units suffered further casualties from shooting. But all three kept fighting.

When the Seleucid camp was soon sacked, it was all over and the remaining units lost their will to fight. A defeat!

Many thanks to Paul for a great game and congratulations on well deserved victory! Paul did very well in stalling my advance on the left flank and even better at exploiting my mistake of sending the cavalry in while there was nothing left to defend the camp.

While it seems that two TuG's Charging Lancers should have good chances of breaking the TuG of Ploearm/Crossbowmen in loose formation in the open, I needed a plan B if I didn't. In fact, I thought I have proper cards to move the third unit of Charging Lancers to charge/intercept bow armed Korean cavalry if my initial attack faltered but I made a mistake and miscalculated.

From now on it was just a matter of luck for me. If I could roll well in melees then I had a chance to break sufficient amount of units to avoid defeat. Unfortunately, I was not able to do so.

This led me to the conclusion that I also made a few other mistakes that contributed to my defeat.

First, I did not make enough room for Phalangites with Cretan Archers to get into the fight with two TuGs of Phalangites against one enemy infantry. Perhaps it would have been even better if I simply moved forward and did not divert to meet the shooters.

Second, light cavalry, while it contributed to routing the shooters in the middle of the battle field, should have moved to the extreme flank and slow down the enemy lancers instead.

And last but not least, once again I was not able to resist the temptation to charge with Lancers early when I knew they are the only units between the enemy and mobile, defenceless camp.

I hope that despite such mistakes made in this battle you enjoyed the battle report.

Thanks for reading!
Posted by Swordmaster at 02:10