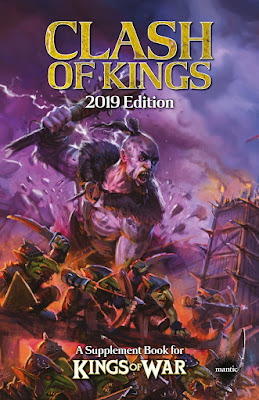 In this year I decided to write a summary a bit before the end. Simply because I managed to finish all my battle reports and have a bit more spare time to reflect on my Kings of War experiences in 2019.

I started with checking my previous blog post from 2018 so if you would like to see what I hoped to achieve in 2019 by the end of the previous year, here is the link:

2019 marks more than 4 years of Kings of War experience for me and I can again say I really enjoyed playing this game. In fact, just before the release of the 3rd edition, I think I got to the point where I thought I have finally found the army list I want to play with, without any further tweaks. But more on that later :)

As it is often the case, there were a few things I managed to achieve, some that I didn't and a few more that were simply unexpected. However, that is probably the pattern every year in many if not all aspects of life so let's see in details what happened before I get too philosophical!

This year I played only 24 games of Kings of War, even though I played more in this year than in last 4 years in general. That's the direct consequence of trying to find enough spare time to play two tabletop wargames in parallel.

Interestingly, I also played online with the use of Universal Battle 2 platform more often than with real models. Those with real models were played during a few local events that I attended.

My initial attempt was to be able to play a game per week on average and for some time I managed to keep up the pace. I know it is not as intense for many other players (for example, my most regular opponent Jeff played around 30 games as a preparation for Masters 2019 alone with 3rd edition rules that were releases about a month prior to the event!). However, I also want to document my games with battle reports and needed to find enough time to do the same for the other system I invested in this year.

What I have learned, however, is that there are a lot of opportunities to play, either in local stores with vibrant Canberra community of players or on Universal Battle. It is really a simple matter of logistics and I hope I will be able to improve on that front in 2020. Regardless of the anticipated real life interference!

I participated in three events this year, one of which was organised online and was the first Australian Universal Battle tournament ever. Unfortunately, I missed out all of the big events such as CanCon, BrisCon or Convic. Once again, real life had something to say and interfered. Although in the case of CanCon I had a huge dilemma as to with which system to participate. I have never had that before and it is quite an interesting situation. I will need to make a similar decision for 2020 CanCon again!

I think it is very important to participate in the events, both small and big, to keep the hobby growing. And in the similar fashion as with casual games with the local players, it is just a matter of better organisation. I really hope I will be able to do better this year in that department.

Universal Battle 2 is a regular "club" for me to go to for my Kings of War games. I found it even more convenient when I tried to find spare time for a game, away from hectic life interference. As much as I love playing with real models and as much as I would never consider UB2 a substitute for games, it has some significant advantages for me.

I found it a good option for a quiet game. Usually, the games in local shop and in particular those during the events, are in quite noisy conditions. It was often more convenient to organise a game on UB2, especially after long day at work. Of course, the usual advantage of being able to play against the players from other places is there.

Interestingly, I also noticed there is more and more activity between players from different countries. In fact, there were a few Call to Arms online tournaments that attracted players from many places and it seems that the popularity is growing!

I think this will keep growing as it helps solidifying the international community of KoW players and will remain a good, parallel option to have games of Kings of War.

I think the plans for painting and modelling where the ones that took a completely different turn than I expected. I have not, unfortunately, finished the regiment of Chariots but I started working on Chariot Nobles. And I ended up working on two regiments of Forest Shamblers with two Forest Wardens as part of my Monster March project.

It was an effect of my army list evolution (which I am going to discuss a bit later), i.e. in terms of change in priorities for modelling and painting. Unfortunately, I was not able to keep the momentum going, even with the models I have already started painting.

I still have hope for improvement but the new projects will depend on further changes to the army list, which I need to adapt for 3rd edition.

Beginning of 2019 was for me in the context of adapting to the updates introduced by Clash of Kings 2019 supplement. I must admit I really liked these annual reviews, updates and introduction of new units. I attempted to stay true to my Multiple Small Units concept and begun 2019 with the following army list:

This army had 15 elements, 11 of which were scoring and with the combined unit strength of 16. I enjoyed playing with it and a few funny moments with Windblast that also caused some damage.

However, I quickly realised that is it not yet what I need and can make work efficiently on regular basis. I would like to take this opportunity to thank Jeff Traish for his advise and many games where I could test different variations of the army list. I have no doubt that without his help I would have not arrived to the version I liked so much in the end.

I was very happy with this force. I think it still aligned with my goal of having an army list that relies on combined arms approach, speed and manoeuvrability, participates in all phases of the game and as quite flexible too. I think I finally managed to get an army I could call Multiple Small Units force under Kings of War rules. And when the date of 3rd edition release approached, I thought I would be able to adapt it to new version of the system relatively easily.

I am sure I was one of the many players who were getting more and more excited about the 3rd edition with every release of a video from Master Crafted about new units for different factions. Kyle did a fantastic job in preparing those! I was quite optimistic about the changes, even though I thought that Elves did not get any particular improvements based on the preview. But I was ok with it, I had my favourite army built after all. Somehow I assumed the only thing I would need to do is to adjust the list based on updated point costs.

I admit I was not prepared, although I tried to follow all the previews before the release, for the changes to come. In my opinion, the most influential change is the way the armies are composed now. One of the reasons I enjoyed 2nd edition so much was that it seemed to support varied approaches to army lists and playing styles. They may not have been equal but one could still enjoy her or his way and armies from the same faction often looked quite different from each other (at least based on what I have observed). If the system allows such variety and diversity, it is a good one in my opinion, because it leaves plenty of room for player's creativity.

My impression is that the change in composition in 3rd edition pushes the armies further towards those based on hordes. I hoped there would be some more information on the goal that the changes in 3rd edition were to achieve. Something like designer notes, for example. If not for each faction, then at least in general. I am aware that there was talk about having a system that appropriately represents mass fantasy battle. But I was not successful in finding more detailed information on what it really means from the designers point of view.

The combination of losing some elements of the army completely (such as very versatile Forest Wardens), having some others changed significantly so that they cannot play the same role anymore (War Chariots and Chariot Nobles) and not enough core regiments, means  that I am not able to adapt my 2nd edition army list to 3rd edition.

I need to start from the beginning. In fact, I came to the conclusion, that once again, I need to re-define what Multiple Small Units really means under new version. Is it still viable option? Especially considering Elves, where they have almost exclusively infantry units as core and significant number of irregulars.

Interestingly, I noticed that it is not the first time where I have such a dilemma. The last time it happened it was in 2015, after the introduction of Age of Sigmar. I attempted to re-define my MSU approach first under 9th Age and then under Kings of War.

Fortunately, back then Kings of War was very accommodating system and it looked like whatever collection one had, there was a way to adapt it.

I hope it is still possible under 3rd edition. At this stage I have simply some concerns if it is going to pay off to pretty much start all over again and if the new system is going to offer the same variety of choices as its predecessor.

That pretty much defines my plans for new year. A lot will depend on my ability to re-define MSU and if yes, what would that really look like. There is no doubt I would love to continue my journey with Kings of War.

If I am successful I would like to play more games than last year and keep writing battle reports as usual. I would like to paint more models that deserve to be painted and fielded on the battle field. And I would love to participate in the events more often.

I can assure you that I will do my best to achieve that goal. However, at this stage, I simply don't know what the end result is going to be.

With that, I would like to thank all those of you who visited this blog and enjoyed reading my battle reports. I always greatly appreciated the fact there is a group of players who like them. I was always very happy when the reader left a comment after the battle report.

I wish you all the best for the new year and I hope we will have fantastic 2020 with Kings of War!

Posted by Swordmaster at 02:07