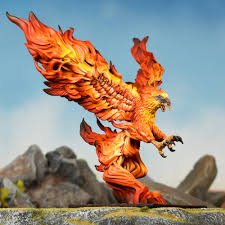 In the last round of the first Australian Universal Battle tournament I played against Jeff who commanded Forces of Basilea.

We played against each other long time ago when Jeff was trying out Universal Battle for the first time. It was thus great to have an opportunity to play again.

What is more, that was my last game of 2nd edition and it looked like it would be the same for Jeff. So we wanted to make it a really epic battle to farewell 2nd edition of Kings of War in style!

When I checked Jeff's list I noticed that he has quite a number of ranged attacks. In particular in the form of a few highly mobile Phoenixes as well as War-Wizards. Add to that Crossbowmen, Arbalest and Spells from Ur-Elohi and you can see this army is really good at dealing damage before the melee even begins. Here are the details of that army:

I must say I really like Jeff's army as it is really quite versatile force. Sure, you may first look at all the shooting attacks, but it needs and has good melee potential. Two units of knights are always dangerous but Penitent Mobs will also do damage if allowed. And five fliers can also create all sorts of headaches to the opponents once they start landing behind the battle lines. Because each flier has some sort of ranged attack, they can keep manoeuvring and shooting while making the opponent guessing as to their next move.

In general, this army has 14 elements, 10 of them scoring and total unit strength of 18. I noticed that infantry hordes are lightly armoured so I should be able to inflict some damage with shooting attacks. I may not have an advantage in speed and manoeuvrability this time. However, although Jeff has more units that fly, my flying cavalry in particular may have better chance at doing more damage in a turn. On the other hand, Phoenixes have better nerve value and can regenerate so as you can see all these subtle differences would matter.


In the last game of the tournament we played classic Loot scenario. I tried to position my token in a way that did not allow Jeff to position his on the same half of the battle field. I think his force would benefit more from such placement and I succeeded in this. Tokens were spread across the battle field.

I knew I cannot simply go for the middle token as I would most likely be intercepted so I positioned my shooters in front of it. In particular Windborne cavalry would be instrumental here in pushing back units to prevent them from claiming the loot too early.

I wanted to focus on both flanks first and if possible, use Forest Shamblers to shield the units behind them. However, when I noticed that Jeff deployed on left and centre, I decided to go for the right token as fast as possible. In this way I wanted to use speed and manoeuvrability of the units there to turn and help in the centre.

Of course the units on the left would need to defend against majority of the enemy army so as usual, time was of an essence!


Elves used the opportunity on the right flank and moved forward to claim the first loot token. In the middle, the shooters focused on Crossbowmen. With the exception of Windborne who managed to waver the crew of the Heavy Arbalest.


The forces of Basilea responded quickly but majority of the action took place in the centre of the battle field. The shooting was not that impressive at this stage.


One of the Drakon Lords on the left flank decided to charge all by his own. It was calculated to stop the enemy and allow Storm Wind and Drakon Riders to attack first.

At the same time, entire group on the left flank turned towards the centre to start advancing from that direction. And to prevent the enemy from advancing towards the middle loot token.


The Basileans sent in their Phoenixes as interceptors and Wizards to interfere with the advance of the Elven army. Unfortunately for the Basileans, Phoenixes failed to do any damage at all!

On the other hand, Crossbowmen started hitting properly this time.


Despite the efforts of the Basileans to stop the Elves, they still attacked. Storm Wind cavalry captured the Wizard and had enough momentum to attack the Paladins nearby. Although the damage was considerable, they were not able to break the enemy knights.

In the middle, Palace Guard spotted the opportunity and charged exposed flank of the Penitent Mob. However, once again the Bsileans held their ground despite heavy losses.


The Basileans counter attacked as expected. However, although two regiments of Knights attacked Elven Storm Wind cavalry, they were not able to rout it!

Palace Guard was not so lucky, on the other hand and Penitent Mob destroyed Elven elite regiment.


Storm Wind cavalry moved back to re-group and made enough room for the Drakon Riders to attack enemy knights. In which they succeeded as they routed first regiment.

The Penitent Mob was not celebrating their victory over Palace Guard for long as the unit was hit from multiple sides by the Elven shooters and perished.

Unfortunately for Elves, their Shambling companions for some strange reason failed to move into action, despite the best effort of their Warden (Edit: In what was my last attempt to Surge in 2nd edition, I wanted to push Forest shamblers to attack the Wizard. Unfortunately, I rolled no successes on 3 dice! :) )


Basileans did not hesitate to attack and destroyed Storm Wind cavalry. Nearby Crossbowmen charged Drakon Riders but failed to break them.


Elves had to attack fast in order to swing the balance of the battle in their favour. Fortunately, combined efforts of Forest Shamblers and Forest Warden allowed them to capture the Pheonix and reclaim the loot token.

At the same time Drakon Riders and Windborne charged together against another Phoenix carrying the loot but this time they were not successful.


Basileans did not even think about giving up and charged again. One more time, however, Crossbowmen failed to break Drakon Riders and found themselves in a difficult spot.

Remaining two Phoenixes worked together to move away from the enemies while protecting the loot.

Elves continued fighting as well, after all, attack is the best form of defence. They also made sure that two loot tokens were protected and that units carrying them are not in the immediate danger.

Crossbowmen were routed but the exhausted and badly damaged Drakon Riders were not able to defeat the Paladins.

Basileans were not able to get to the loot tokens so they focused on attacking the viable targets. One Drakon Riders regiment and one Forest Shamblers group were destroyed.

However, Elves carried the majority of the treasures to safety and they claimed the victory!

Many thanks to Jeff for a great game! It was definitely a fantastic way to farewell 2nd edition!

I enjoyed the game a lot, with its unexpected turns of events, where often units that seemed to be doomed, kept on fighting and those that should have easily won their fights, did not really do it.

It was also interesting to see how the loot tokens were changing sides. I believe it was just 5 points difference in the end in terms of pure losses, so I won this game only thanks to the scenario.

I must say it was probably one of the best tournaments I participated in, simply because all my opponents were fantastic. I greatly enjoyed all my games!

The army I played with is most likely the one I enjoyed using the most. It had so much flexibility in it and I will definitely miss it. Unfortunately, I will not be able to use it in the same form in 3rd edition. I am now embarking on the new journey and I hope I will find new balance soon!

Thanks for reading!
Posted by Swordmaster at 14:54