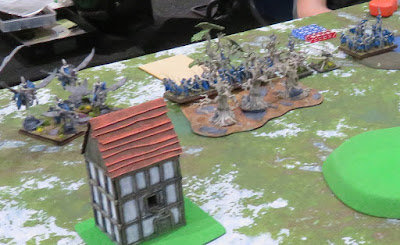 In the second game I was about to play against well known opponent, Mark, who traditionally played Elves as well. We have already had quite a few battles between our armies and they are always very interesting because we have different approaches to the army composition. However, Mark tends to try a few varieties of his army and this time he brought the following:

This army has two strong components, one orientated towards melee and the other focuses on shooting. Two hordes of Drakon Riders and two Dragons form an incredibly fast, maneuverable and hard hitting contingent, able to attack many foes even from the front and destroy them in a single turn. Dragons are also very flexible because of the breath attacks so one can always keep the opponent guessing about the next move.

On the other hand there is a horde of Archers, assisted by a regiment of more shooters and two Dragon Breath war engines. That makes for a very dangerous shooting base that with the support of the Mage and Army Standard can take care of many units all by themselves.

Thanks to that composition the army can play in a flexible way, allowing the shooters to keep the clear line of sight while fast and maneuverable Drakons and Dragons can pick the right fights.

I considered this game to be even more challenging than the first one because the shooting is much stronger and dangerous to my small units while at the same time the melee specialists are much more maneuverable than Mounted Sons of Korgaan and it is very difficult to even pin them down.

I decided on the following gamble this time. As Mark already knows my army very well, I expected him to use his fliers on flanks to prevent me from enveloping his flanks. Hence, I wanted to start shooting duel with his archers and at the same time approach fast on one flank before the units on the opposite could help.

We played Invade this time so I really wanted to carry the fight to the enemy and engage the foe on his half of the battle field. I thought it would at least give me the advantage to stop enemy units to block mine and intercept some of the fliers in the process.

Mark indeed deployed his Drakons and Dragons on the flanks and used protective terrain to help his shooters. It was tough but I decided to follow the initial plan. Mark won the roll off and decided I should have the first turn.

The Outcasts had to move forward fast. Unfortunately, the terrain made things a bit more complicated and the units were also packed a bit tight so the advance was not smooth.

The shooters focused on the enemy war engines but did not do enough damage to destroy any of them.

Elves moved the Drakon Riders and the Dragon a bit back on one flank.  Their companions on the opposite side of the battle field used the freedom of movement to start enveloping their opponents and threaten their flank.

In the meantime, the Archers aimed at the units of enemy knights and destroyed one of them easily.

The trouble with maneuvers made the advance even slower, especially that the shooters still needed clear line of sight. It resulted in the situation where their effectiveness was still limited and while they managed to rout one of the enemy war engines, the advance was still slow.

Because of that one unit of knights charged enemy regiment of archers to distract them while the Drakons tried to avoid their counter parts and landed in what seemed to be a safe spot.

Elves picked their targets carefully and stroke hard against enemy formation. While units on the Western flank kept the distance, the Archers obliterated one more unit.

At the same time, Drakon Riders attacked from the East and despite defensive phalanx formation, Sea Guard could not hold its ground and perished. To add insult to injury, Dragon Lord managed to rout Drakon Riders on the Eastern flank, removing another dangerous unit.

The loss of four units put Outcasts in a difficult situation they attempted to break the encirclement. First, Silver Breeze was sent to attack one of the dragons in order to distract it and buy some time for the infantry to advance. Unfortunately, the fast cavalry failed this time.

Next, Palace Guard regiment charged through the forest to prevent Archers from shooting while Drakon Lord maneuvered to the flank to help them soon after.

Finally, Drakon Riders charged their counter parts to pin them down as well and awaited support of the nearby Palace Guard troop.

In the attempt to break out the Outcasts made more mistakes. First, Palace Guard moved a bit too close and got attacked by Drakon Riders, who had no problems in scattering infantry in the open.

Then the Dragon teamed up with second unit of Drakon Riders to get rid of the enemy fliers. At the same time the second Dragon routed enemy knights that could not win in the melee versus Archers in the swamp.

The Outcast has just lost the battle, it was not the matter to try and limit the margin of defeat.

There were few options left and even fewer units to fight back with. Palace Guard regiment failed to rout the Archers. It seems that the Drakon Lord should have helped with the timely flank attack but he tried to intercept and slow down enemy fliers.

Palace Guard troop did well against the second unit of Drakon Riders but not good enough to rout them either.

The counter charges were much more successful and both, Drakon Lord and Palace Guard regiment were no more. Miraculously, Palace Guard troop survived the attack!

Silver Breeze unit managed to rout exhausted Archers but that was just a small success that would not change anything. Their companions, on the other hand, could not inflict enough damage to destroy the badly wounded horde though.

Likewise, despite heavy damage done to Drakon Riders they too held their ground!

Elves mopped up the remaining enemy units. After a few more fights only two Army Standards were left standing. It was a crushing defeat and a great victory for the Elves over their rebellious kindred.

With all the units gone I had no options left. I decided to attack Archers horde and Drakon Riders horde. Both units were badly damaged so all I needed was 1 point of damage more to force some nerve tests. However, Army standards are not melee experts and I had to get 6+/4+ versus Archers and 5+/5+ versus the Drakons. Slim chances and both failed. It would have not changed the course of battle but would narrow the margin of defeat a bit.

In the end I was left with just a single Army Standard and Mark claimed his well deserved victory!

I would like to congratulate Mark on a very well executed plan and very good game. He patiently waited for good opportunity to attack, used his superior shooting effectively and made me react to his moves in the process. He used the strengths of his army very well and exploited any mistake I made to the fullest. Well done, Mark!

On my part it seems I didn't learn from the first game and when facing even more mobile and maneuverable hard hitters I still deployed too tight and moved poorly. Once again I played to the strength of the enemy army, attacked piecemeal and made additional mistakes that contributed to the crushing defeat in the end.

If I were to play this game again I would have deployed my army with shooters and infantry in the center and in a more spread formation. The reason is that it would have allowed my to avoid being shot at too early and try and use my first turn or two to maneuver to better positions. For example, it may have allowed me to move to my right and try to defeat two enemy units there with shooting and melee rather than trying unsuccessfully to close distance to Archers while being under the threat of flank attacks.

Bad deployment quickly resulted in losses due to shooting. I also underestimated how quickly Drakons and Dragon can move from my right flank and I simply didn't have time to engage with the rest of the enemy army.

I must say that first two games of the tournament made me think more about why I make such mistakes. It is as if I forgot all I learned about the game and my army until now and I maneuvered as if I played with this force for the very first time.

One of the reasons I write the reports is to identify the mistakes but while I can analyze them after the game there is no use of it if I make them again and again. Perhaps I will find the answer to that question :)

I hope it was still a good read and a good example how the army of the type Mark used can overwhelm numerically superior opponent.

Posted by Swordmaster at 20:14