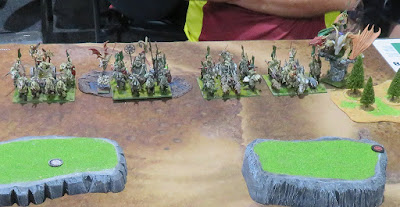 The first game of the Clash of Kings Australia 2018 was a grudge match against Ken "Chaaarge" and his Varangur. It happened to be a third game in our sport rivalry and the second against Varangur. It was a rematch after we played against each other at Masters too!

We both brought the same armies so it was very intriguing to see how the game was going to develop this time and what would be the result! Ken was a bit nostalgic as this tournament had his personal theme to it, "The last flight of Herja". Perhaps that is why he spent the previous night sinking his sorrows in a pint or two of the local beer. :)

For me the theme supposed to be "Catch the Fluffy!". Ken's King on Chimera wreaked havoc among the ranks of the Outcasts last time so I hoped I would be able to prevent that happening this time. However, I was suspicious when Ken pretended not to be at his best in the morning. He seems to me to be a player who actually performs better under the pressure and who needs to sleep anyway! Certainly not the followers of Korgaan!

It is quite rare opportunity to play against the same army twice. There is hope I learned something from last game but at the same time the different terrain set up and scenario may completely change the circumstances.

Last game showed me how powerful King is, how annoying Herja can be, even if she is underperforming and how difficult it is to actually outmaneuver this army, even if on paper it looks like an easy thing to do. After all, I have twice as many elements in my army, right?

I always try to come up with a generic plan against particular enemy and then update it as soon as I know the scenario and the terrain layout. This time I wanted to play aggressively because I came to the conclusion that if I bring the fight to the enemy I should be able to pin them down and not let them pick their fights. I also knew that playing against this army I need to take into account that I am going to lose units. It took me very long to trap one unit last time so I had to try something new in order to win.

My plan evolved around the fact that my drakons and heavy cavalry are a bit faster than Mounted Sons while the rest of the army is slower. I decided then that I can afford losing the fast elements provided they hit first, do some damage and allow infantry and chariots to finish their enemies.

I also had to take into account the two fast fliers, Herja and Fluffy. I could intercept only one of them (or tempt them to attack my unit) and I should be able to hold one, maybe two turns if attacked from the front. Hence another idea that I would use my Drakon Lord as a bait for one of these fliers. If I can tempt Ken to do so and execute attack quickly enough, perhaps the other flier would not do enough damage yet and should start getting advantage simply because of exchange of units favors my army.

Now, what was that saying about plans meeting the enemies? :)

We played Scourge as a scenario. It is a bit similar to Loot but instead of grabbing the token and trying to run away with it, units can generate bounty on the chosen points. It means that potentially, one can generate more loot tokens than there are objective markers.

I decided that my plan should enable to achieve the following:
1. Prevent the enemy from reaching the markers to generate their own loot.
2. Limiting the number of units that can generate the loot.
3. Have some spare of my own to do so instead so even if my two wave attack falters I should run away with some loot to win the scenario.

To achieve that I deployed in two groups. One on the left was to try and outflank the enemy. In doing so I hoped to lure Herja and keep her busy. Drakons would be followed by Palace Guard regiment that would help to hit the wounded units and hopefully rout them in the process. Chariots too would be helpful here.

Second group was spearheaded by Storm Wind cavalry. The idea was to advance in cover of hills (as they are height 2) and attack enemy eventually with Palace Guard troops preventing Fluffy from landing behind the lines and then making that wave two attack after Storm Wind.

In the meantime, the shooters where to use the gap in between to either hit some enemy knights or try and eliminate the wizards instead.

I must admit I didn't quite like the hills as they significantly blocked line of sight and while they offered protection they also blocked opportunities to attack unless being on top of them.

I got first turn and I moved forward!

Elves advanced according to the plan. The units on the left still kept the distance from Herja while the units in the middle tried to shoot at enemy knights. However, shooting at the targets in cover and while moving significantly reduced the efficiency.

The Varangur barely moved, keeping their solid positions and only wizards moved forward to cast some lightning bolts at the Sea Guard. However, the King ordered his loyal mount to move at a double and landed safely near the ruins where the Elves left small opening. Huge mistake!

Drakon Lord landed at the enemy flank and tempted Herja to commit to melee. At the same Drakon Riders advanced to attack the enemies soon and other units consolidated in the middle for one more not so efficient shooting phase.

The units on the right got distracted by the nearby Chimera and slowed down their advance. That was not good either as Elves started reacting to the enemy movement.

Once again, Mounted Sons refused to move forward and let both leaders to do the fighting. Herja could not resist the temptation and charged Drakon Lord. He held his ground but got wavered!

At the same time, on the opposite flank, the King and his Chimera started burning some Elves and got into position to attack a lot of units.


With the Chimera behind their lines, Elves had little time to act. They decided to charge with the first wave as planned but that attack was far from perfect. First, attackers had to charge through difficult terrain that significantly reduced the efficiency. Second, due to tight enemy formations, Drakon Riders could not charge a single target and had to attack one unit each.

Palace Guard and Storm Wind units followed but the damage done by first wave was not big.

Patience paid off and now Varangur units could comfortably counter charge and decimate their foolish enemies. Elves lost four units in that counter attack as the King picked the unit of Elven knights and destroyed them too.

Even Palace Guard on the hill was badly damaged when both wizards unleashed their deadly spells. Elven plan started collapsing like house of cards.

Elves followed with the second wave hoping to rout some enemy units but only one of them was destroyed. Seeing that, the rest of the army moved away and started securing the token areas in hope that the enemy would be too distracted to notice that.

Elves lost more units in the follow up attack. Drakon Lord could not longer keep Herja occupied. Palace Guard got destroyed by counter charging Mounted Sons, while the King spotted exposed flank of the Sea Guard unit and routed it too.

Elven units tried to keep the enemy busy so they attacked again. Unfortunately, Chariots failed in their attack. Silver Breeze units tried to block the path to each token while Palace Guard troop started running away with one loot piece.

Elves keep paying ultimate price for their folly and more units die. Even Palace Guard trying to outflank the enemy is hit by the spell and wavers in the process.

Although Varangur army controlled the battle field they were running out of time in order to claim the loot. Fortunately Elves made another mistake and Palace Guard unit carrying the treasure, convinced they are in a safe spot, did not reform to face the threat. The King chose to attack easy prey and got the loot!

However, Elves still got one objective and Varangur army run out of time to finish off badly wounded enemy.

Well done Ken! It may be a draw on scenario but your draws really look more like victories to me. It seems to me that I have just discovered yet another plan that does not work against your Varangur :)

What can I say, that was brutal. Turn 7 would see Ken claiming second unit and probably wiping out all my units. I made tons of mistakes but Ken was also very patient and waited for me to commit to melee on his terms.

My two wave attack failed. Perhaps it would not work anyway but in this game it was badly coordinated too. And I definitely underestimated the capacity of Mounted Sons to counter charge strong. They still hit on 3+ when doing so, and even with "only" Crushing Strength 1 they could eliminate my units in a single turn.

I think that I would have done better by simply waiting on my half, perhaps getting closer to generate some loot in the shade of the hills.

But even more so if I spread the army as I usually do to be able to outflank the enemy easier and have a better access to all the tokens too.

In the last turn I also made a mistake by not reforming Palace Guard to give them a fighting chance to hold against charging Chimera. Slim chance, I know, but definitely better than allowing it to charge from rear.

Not a good start of the tournament, not a good performance at all either with so many mistakes on my part. I just hope it is an useful example how NOT to play in KoW :)

Posted by Swordmaster at 22:07