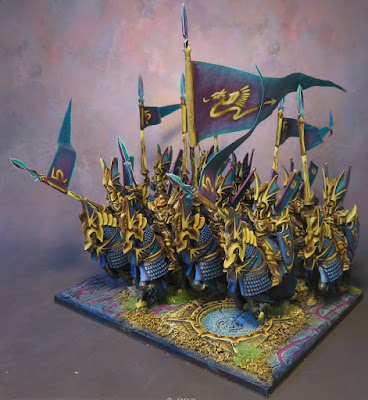 I have recently finished modelling and painting a regiment of Stormwind cavalry for my Kings of War army. It took me several months, even though half of the models required re-painting rather than building from scratch. It was this type of a project where you progress in stages, working on it for some time, moving to other activities and then coming back to it again.

It was quite an interesting experience for me, however, and I learned a few things on the way. Hence, I wanted to share a few more details about various challenges I encountered while creating and painting this regiment. I hope it can be useful for others.

It feels really great to complete the project like that. Satisfaction it brought also fuelled my motivation further. So, instead of needing a break, I actually started another regiment! It may take some time as well but I know it is worthy the effort!

The models I used for the regiment are Games Workshop products from the time of the 5th edition Warhammer Fantasy Battle. I had some of them not yet painted and some I did years ago and then rebased for a troop of Stormwind cavalry for Kings of War.

However, I wanted to add a few elements to the models to make them look more like a heavy cavalry. I also wanted to make the regiment look like its starting the charge, with a bit more dynamic feel. To do that, I added pennants to the lances. Another modification is an addition of back banners as I thought it would also create a more unique look of the unit.

I would like to share how I created the regiment in the following order: the base, the models and the respective components, the painting.

I used 3mm magnetised MDF base from Olympian Games cut to the dimensions of the cavalry regiment in Kings of War. Then I used the method I developed some time ago with the use of various sculpting materials, rolling pins and some old Micro Art Studio bases I had. If you are interested in the method, here is the link to the blog post I wrote some time ago that describes the process:

The post still talks about the individual bases but the process is the same. Here is the photo of the early stages of the projects with the base ready:

For this project, I decided to complete the base ahead of the models. In this way I could pin them to it as soon as I finished painting them one by one. I found this way to be more encouraging to keep on going as I could see the progress.

There were a few things I needed to do in terms of modelling to prepare the knights for painting. The main element was the rear barding for the steeds. When I first came up with the idea itself, I had some spare plastic models of the horses so I could use these. But for these models I run out of the material. Initially, I simply tried to sculp it myself with greenstuff. It worked although closer inspection reveals many imperfections and the difference between front and rear.

With a few models I had to paint from the beginning (rather than repainting the old models), I wanted to come up with a faster and better method. Luckily, I have just done some casting of missing bits and pieces and used the thermoplastic mould material to do so. First, I used the mould to create the form of the front barding. And then, I used it to imprint the pattern on the greenstuff already stuck to the model. It worked much faster and I like to think the quality is a bit better.

Another element I needed to cast was a shield. I must have lost a few of them in the meantime but as the shields are metal and flat on one side, it was even easier to cast them with the moulds. I really enjoyed this process and I think I may be using it to create a few missing bits and pieces for the models in the future.

Unlike the barding, the small back banners are not attached or painted until the last stages. The poles are attached to a small blob of greenstuff that I added to the back of the model. Once dry and fixed, I  proceeded to painting the entire model. Then I added the paper banners and pennants to the lances and painted these accordingly.

The modelling steps added time needed to complete the project but were quite enjoyable to do and I really like the final effect I was able to achieve thanks to that.

I am relatively slow painter so I wanted to use the opportunity to speed up the process and focus only on essential steps. I noticed, that sometimes I developed the process that had steps that were not necessary, at least not at this level of painting quality.

Based on my experiences, the most optimal for me was painting 2 or 3 models at the time. I also focused on areas that needed to be painted in the similar way at the time. For example, when I needed to paint purple-turquoise clothes, I did it for all models in the batch. Then I moved to the blue armour, then to "golden" armour and so on. I found it quite good balance also from the point of view of how much time I could spend for painting in one go and how much paint I needed at the time.

In general, I always work from a dark base colour and only highlight areas. I only use washes as intermediate stages to smooth out and tone down the transitions. I try to use washes only once to achieve the effect. Depending on the colour, the wash is applied either at the very beginning (e.g. for clothes I use purple as a background colour and then add wash to make it even darker), or after first 2-3 layers only (e.g. for "golden" armour I have Vallejo Scorched Brown as background, then Scale 75 Kalahari Orange for first layer and Scale 75 Sahara Yellow for second before I apply Citadel Seraphim Sepia Wash). Of course, I always try to thin my paints appropriately :)

The project had some challenges, apart from the fact it required more time than any of my previous projects. Due to relatively frequent breaks, I noticed I need to spend a bit more time to warm up again and that results in some slightly different final effects. Fortunately, these are not that visible from afar!

I also experimented during the project so there are differences from one model to another if they were not painted in the same batch. I found it quite crucial to at least finish the same element for all the models in the batch in a single painting session. In this way I could achieve the similar effect on all of them.

And the usual challenge of accepting the quality of the painting at this particular moment, even if I knew I could re-paint it a bit better. I always try to use as a motivation as it means I am still improving. And the fact I have still a lot to learn works for me as a great motivation anyway.

Here are a few more photos (hopefully a bit better than WiP ones I posted on some FB pages) of a completed regiment. One more unit closer to the stage where the whole army is painted in the same colour scheme! 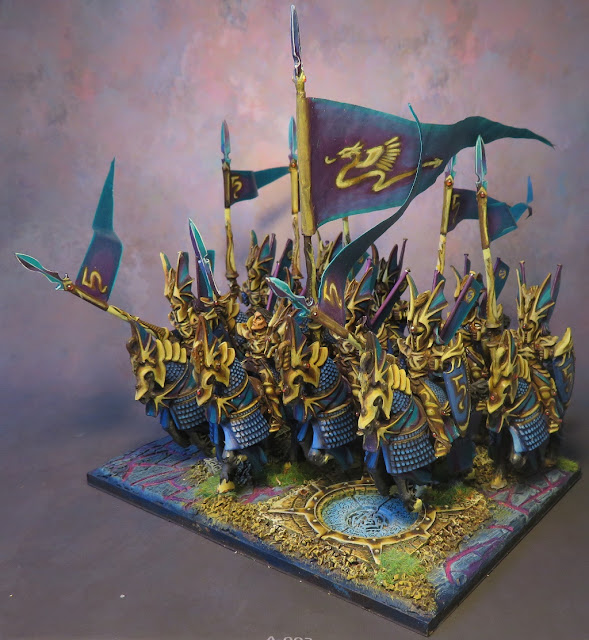 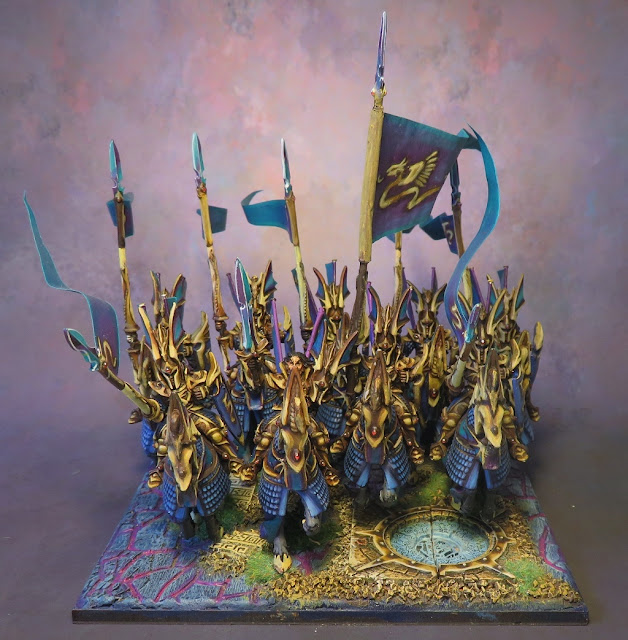 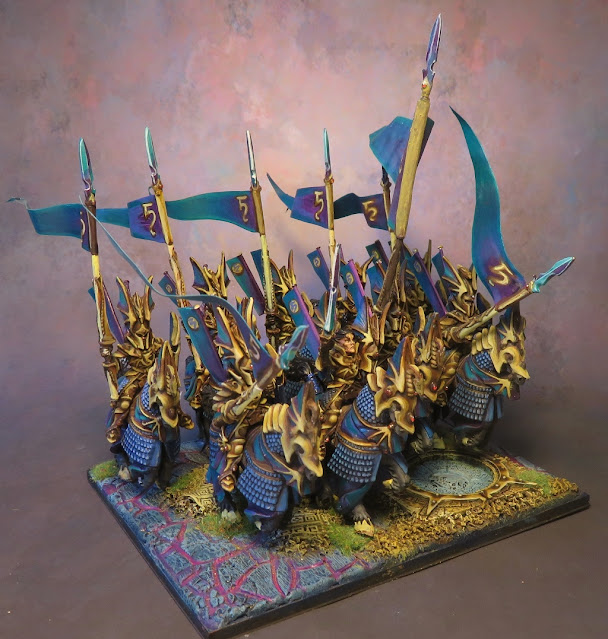 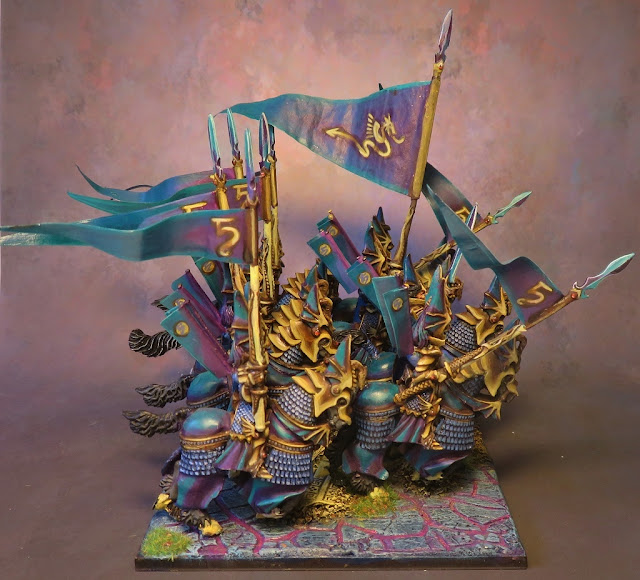 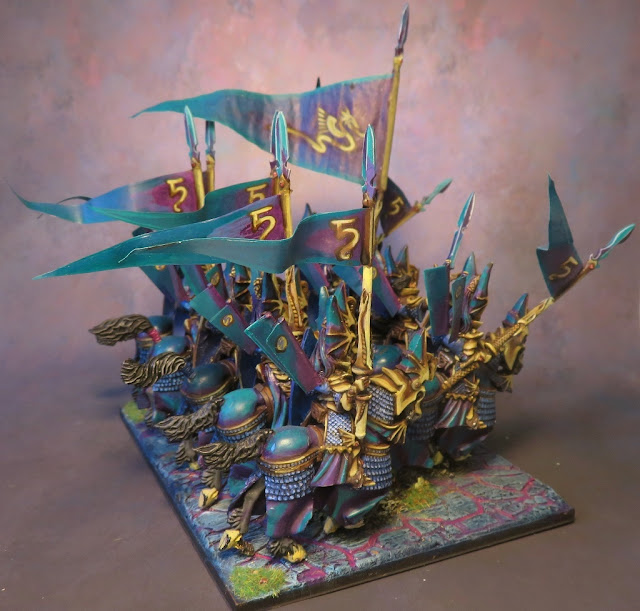 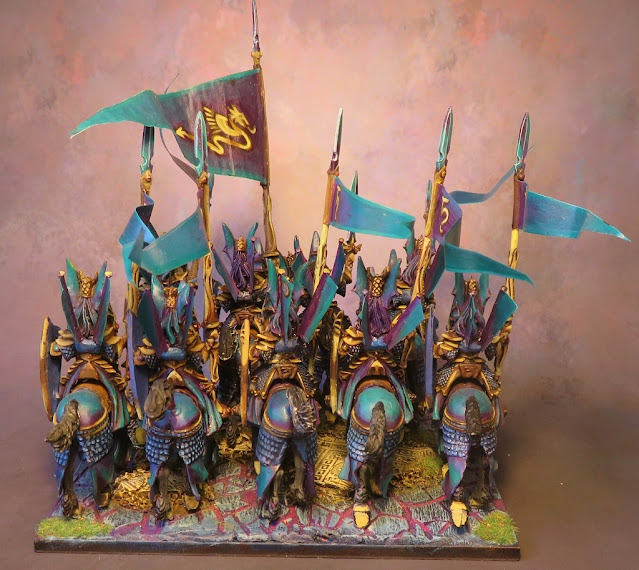 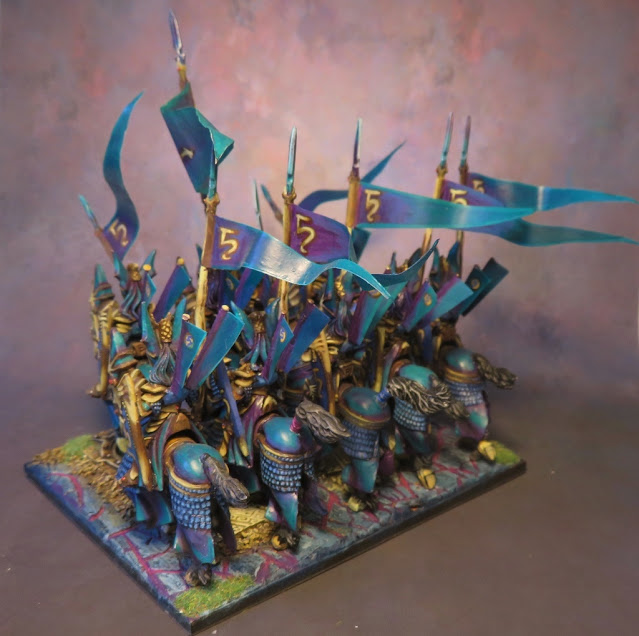 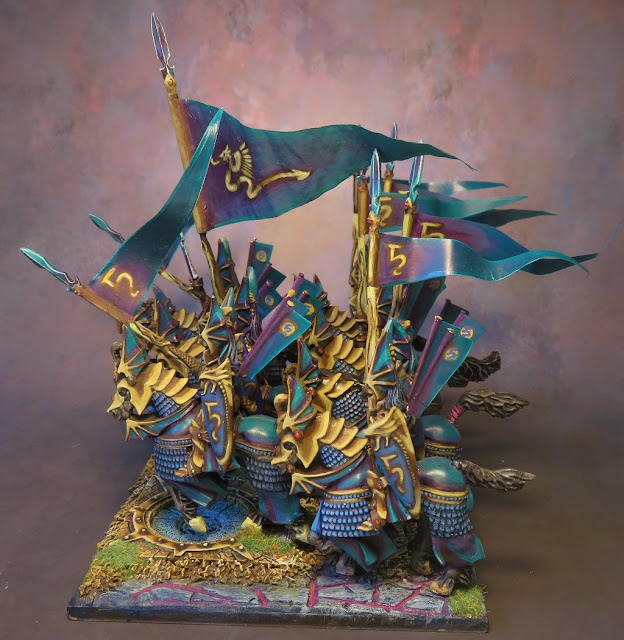 I hope you like the overall effect and that you would find some of the ideas useful!
Thanks for reading!

Posted by Swordmaster at 17:58