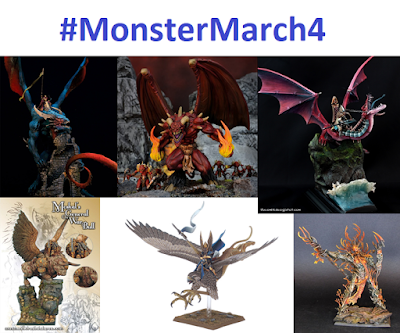 The first week of the Monster March painting challenge is about to end and I must tell you that all the participants started strong. In fact, there are a few more who have just joined as well! It simply shows it is never too late to get that big model you wanted to assemble and paint started!

Just check out the progress participants have made so far, get inspired and motivated and join us! You know you want to! :)


As in previous editions of Monster March, I am going to show progress each participant has made so far. Some of us had more time to use, some of us did not but the main goal is to keep moving forward!

Boss carefully inspected the size of his model and decided the best fit would be to use it as a Knucker in his Trident Realms army. And what a better start for the model for the force of creatures from the deep Seas than a proper bath before the assembly!

Who would have thought that Goblins also like bathing! But that is what Christo tells me as his pet Slasher was also neatly washed, assembled and prepared for painting!

Craig mentioned that this week was quite difficult in terms of time availability but what is the most important is that he made progress regardless! That's the spirit Craig! Keep up the good work!

As you can expect, assembling a model of a size of Eldar Void Dragon Phoenix takes time but Clyde started strong with this beautiful model. He also managed to add some first undercoats! Well done!


You should definitely check Cylde's blog for more details on this project as well as other featuring beautifully painted models!

DAM prepared not one but two blog entries that are related to his project! The first post was about magnetising the model and selection of weapons so that it can be used flexibly for his games with different type of armament. Way to go in order to utilise the model to the fullest potential!

Second post was about assembly and painting. It is really worth checking as DAM has a special approach as to which parts are assembled and painted and which ones are painted while on a sprue. Clever!  Check it out here:

Ed started very strong as well! To the point that he is already considering painting a stretch goal model! :)

Here is the link to Ed's blog where he posts about the details:

Michael is working diligently on his Northern Alliance army for Kings of War and he has a perfect model for the Lord to lead it:

This model has been recently released by Mantic and I would love to see it in real life as it looks really good on the photos!

Rory has just finished hosting painting challenge called Squandry and painted his squad for that too! He is joining Monster March as well with yet another classic model he intends to paint for his Iron Warriors army.

And you should absolutely check the beautiful models people painted for Squandry!

Sav made some good progress on his model and as many of us, assembled and prepared his Daemon Prince for some painting!

Vince chose another beautiful model from the most recent releases - Phoenix! I must admit that it is one of those I consider buying and painting just for that reason! Excellent choice, Vince!

Vince is documenting the progress on his blog and you can check more pictures here:

Vince on all things Kings of War

I must admit I was lucky to have some more time to paint but I also was very happy to see I can make faster progress than anticipated! Even if I had basic colors painted on the model already.

I started with feathers and since I enjoy painting details, I decided to paint each one of them instead of drybrushing. It was a good decision as I had a better control over the highlights. I worked on griffon's body next and I kept it simple. I am still learning how to achieve nice transitions on bigger surfaces. I will paint claws, beak and eyes next to have the griffon finished.

I then proceeded to painting the gold armour of the rider. It was done in multiple stages where I combined many layers with washes. I am quite happy with the effect!

I will most likely continue with the cloak and other purple elements. After that there will be plenty of details to attend to. The most challenging will be painting the face I think. Let's see how much I can paint this week!

Many thanks to all the participants! Great to see progress and more people joining the challenge! There is still a lot of time to do it!
Until next week!
Posted by Swordmaster at 19:28