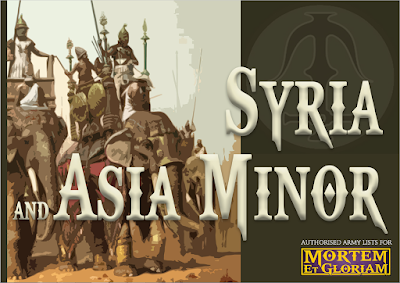 
In third round of the Ascending Valhalla tournament I played against Asiatic Successors army commanded by Geoff. Once again I got to play against the force that is almost perfectly historically matched. I must admit I am always happy when I have the opportunity to play against such faction so that we can reenact some episodes from the Wars of Alexander's Successors.

What was even more important for me was that I had a great pleasure to play against Geoff. I consider him as my MeG mentor as Geoff was my very first opponent at the the very first tournament I participated in. Back then I was not yet sure if I want to commit to a new system. But thanks to his infinite patience I learned enough to keep going. Thanks to his enthusiasm I made a decision to invest in first models and build a proper army. It was thus fantastic that after all this time I finally had a chance to play against Geoff again!

As in the game against Phil, I was very curious about Geoff's choices and I must say I was very intrigued by what I saw. In short, only two TuG's of Phalangites, only three units of infantry and the rest cavalry and elephants! Here are the details: 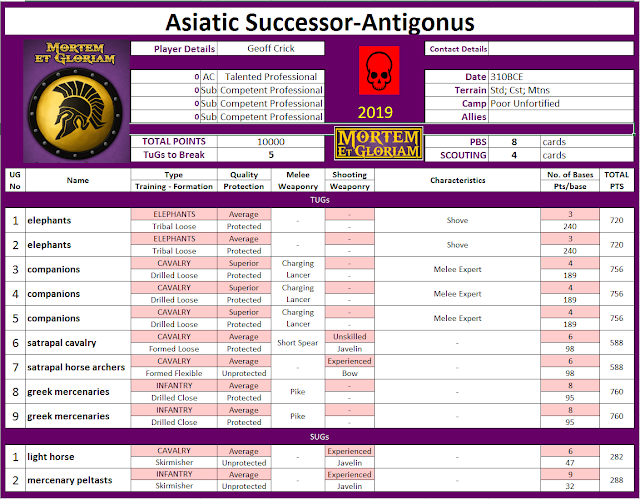 Geoff's army had the same number of units but because he had 9 TuG's, the breaking point was a bit higher. I actually think our armies are quite different, despite many similarities between the units. Geoff's army has minimum infantry and quite varied contingent of cavalry and elephants. That meant that he would prefer to avoid my Phalangites and engage only if some cavalry flank charges would be possible shortly after. But at the same time his advantage in mounted troops would make him seek cavalry combats, in particular if elephants could be added to the equation.

For me the opposite would be better. If I could pin his elephants with Phalangites, I could eventually grind them down. Fight against Greek Mercenaries would be a lottery and occasional Shove result may help but it is not something I can rely on. At the same time I would need to use my own cavalry to screen against enemy mounted troops.

It was thus interesting to see who would be able to execute his plan better.

Pre-battle phase did not result in any particular advantage to either army. Once again, a few patches of rough going terrain were present but which left plenty of room for unobstructed maneuvers.

I thought to use the small patch of the rough going terrain as a place for Thracians and Cretans to go to and threaten the enemy without danger of being overrun by the cavalry. I kept waiting for Geoff to deploy his Companions and decided to deploy Phalanx in the center and on the right flank. Then I reinforced that side with more cavalry as the Elephants were deployed on the other side. I still left the small contingent to slow them down.

Geoff kept his Companions in the center which allowed him to move either way. But he deployed his remaining cavalry on my right flank. As all these were equipped with missile weapons they would provide a very good delaying force.

The plan was to advance on the right to catch the cavalry and move the phalanx around the patch of terrain. The remaining phalanx and smaller contingent of the cavalry on the center left were to slow down the enemy.

I was the invading player in this game.

Seleucid army moved forward and kept the coherent formation but that resulted in a gap on the left flank. This gap left an open path towards the undefended camp. It seemed that Antigonus noticed the opportunity and sent his forces, including two cavalry units, to that direction.

Antigonids pushed hard on the left flank, especially with the addition of Companion cavalry the pressure on outnumbered Seleucids cavalry increased. Brave Terentine Cavalry was not able to slow the enemy advance alone.

Seleucids attempted to surround the Satrapal cavalry on the right flank so that the infantry could be diverted to the left.

Seleucids line cavalry charged against the Antigonids mounted warriors and managed to catch the unit of light horse. The Satrapal Cavalry managed to run away. However, that small success was not enough to balance out the dangerous outflanking the army was now facing on the left. One unit of Phalangites was marching at a double to plug the gap but will they arrive in time?

Antigonids push towards Seleucids camp continued and it looked like the relief force of the Phalangites would not arrive in time. It was now up to Line cavalry alone to buy a bit more time.

The center of the battle field saw a stand off between Seleucids and Antigonids. Seleucids did not want to advance as their compact formation ensured their flanks were protected. While Antigonids were reluctant to attack enemy Phalangites with not evenly matched forces and when the cavalry was not able to exploit gaps just yet.

Seleucids managed to rout Satrapal horse archers but that also led some units quite far away from the main action.

Seleucids cavalry charged enemy Companions in order to block the path to the camp. Unfortunately, that also made it possible for the Elephants to join the fight later and it made all the difference. Seleucid cavalry was broken and Antigonid cavalry pursued into the camp!

In small skirmish nearby Tarentine Cavalry surprised the Peltasts and charged at them instead of exchanging missiles and insults.

In the center an epic clash erupted when Antigonids Greek Mercenaries and Elephants crushed into Seleucid Phalangites. The pressure was immense but Seleucids held their ground. For now!

Both armies put a lot of effort already and were getting exhausted. But neither wanted to yield and admit defeat so the casualties kept piling up.

Antigonids plundered the camp but fortunately that did not affect Seleucids army. In return, Tarentine cavalry routed the Peltasts and Phalangites stormed into the flank of the Elephants but were not able to rout them just yet.

With that bloody stalemate, the armies disengaged to regroup as neither managed to achieve significant advantage.

Many thanks to Geoff for a fantastic game! There was a lot of move-counter-move actions and perhaps that too contributed to the fact we managed to play 6 turns only.

I must congratulate Geoff for out-deploying me as I think his army arrangement was superior. He deployed his units in a way that protected his camp and allowed aggressive advance at the same time. He also exploited the opening on my left very well while I did not anticipate the danger I created in time.

I should have deployed phalangites more to the left or keep the center left where they started and move the right half towards the center earlier. Fortunately, I managed to catch a few light troops but that was a bit lucky, especially at the start when skirmish retreat did not take light horse away from the charge distance of the line cavalry.

As a consequence of flawed deployment I lost one TuG and the Camp. Luckily it did not result in wide spread panic across the army.

If the game continued I am not yet sure about the outcome other than more casualties. On one hand I hope that Phalangites would manage to break the Elephants, especially before the nearby Companions would wheel around and get into the fight. I had two light cavalry units to try and stop them as well.

In the end game ended with 6:6 result, perfect draw!

Posted by Swordmaster at 14:16