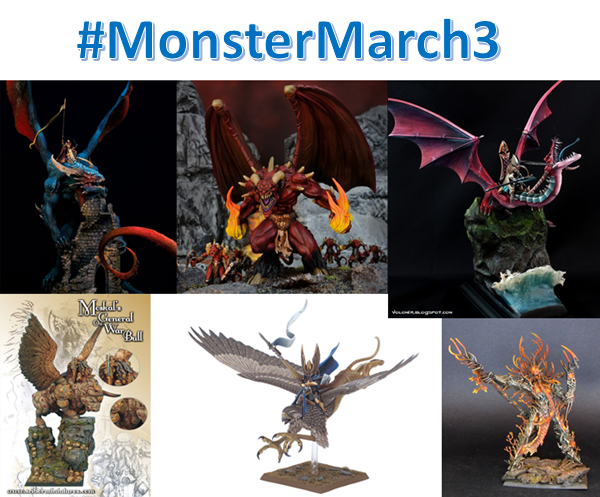 Welcome to the final post about Monster March 3 painting and modelling challenge! In the final post I will once again present the participants and the projects they pledged this year.

But before I do this I would like to thank all and each one of the participants for your contributions. It goes without saying that the challenge would not be what it is without you. Thank you so much! It was absolute pleasure to host it for you again and as before, I am always amazed and inspired by all of you!

I must admit I had a bit of a doubt if I can host it this year. However, when Ed asked me if there is going to be Monster March this year, I cast my concerns aside and said yes! I realized that this is what I need to do especially when real life interferes and it seems that spare time is shrinking and shrinking. It is amazing, however, how committing to such project helps to find time and organize other activities accordingly.

I am really happy I did not give up and without further ado, here are the participants and their final projects for Monster March 3!

Azazel pledged some crazy amount of models and it was amazing to see that one after another they are being finished. I am very happy to learn that Monster March 3 helped him to paint models that were waiting for their turn for some time. For various reasons, they could not make it to the top of the list of the projects but they finally did and what a fantastic collection it is!

Here is a photo of one of the most recent models Azazel painted.

These are Ice Elementals from the limited edition of the models provided in the frame of the Kickstarter and they are made out of transparent resin. What a great idea! I can imagine painting them to keep that transparency contributing to the final effect is a skill in itself! Here is the link to the post Azazel wrote about these models:

You should definitely check other models Azazel painted and he created a separate post on his blog for each one of them. Here is the list of links:

Thank you very much for your fantastic contributions and well done indeed! Very inspiring both, on the level of painting on the quantity of great quality projects!

Blazmo pledged super heavy tank for the painting challenge and he did a fantastic job on his Shadowsword! What it is more, he completed his pledge after 3 weeks!

Blazmo, however, did not rest at all and immediately moved to paint another great model, coincidentally fitting perfectly with the theme of Monster March - Venom Crawler!

Many thanks to Blazmo for great models, excellent posts and congratulations on completion of two projects in one month! Well done!

Caladaris also contributed several models to the challenge and he provided a series of fantastic posts on his modelling and painting progress. It was a fantastic journey to observe his projects take shape and I must say it is always inspiring to see his unique ideas being implemented.

Caladaris completed no less than Eleven models for this year Monster March! It is indeed a great achievement, so congratulations and well done! Here is the link to the final post Caladaris wrote on that occasion, also comparing the models he painted last year with those completed this year.

Many thanks to Caladaris for fantastic contributions!

Chris started the month with the pledge of a very unique model for his Lykanis for Kings of War. As it often happens, however, there are other projects that may compete for the hobby time. I understand it myself very well too!

Chris shifted his attention to some castle building for the Sieges in Kings of War but also to building his Kings of War Vanguard warband. Something I still need to do! Here is an example of his, traditionally old school, model for Vanguard:

All the best with the Vanguard project, Chris! I think building castles and Ogres for Vanguard still count for Monster March challenge! Many thanks for participating and contributing to the pledge!

DAM contributed a fantastic model of the Titan as his Monster March pledge. And he also provided a very detailed series of posts on his unique painting techniques. In particular, very intriguing camouflage pattern.

Please, check DAM's most recent post on this project (and check his blog for other great articles too!). Here is the link:

Many thanks to DAM for his excellent posts and fantastic model! Congratulations and well done indeed!

I would like to start with thanking Ed for reaching out and asking about Monster March. His initiative did help to sway me and make the decision to do it again. I know I would have regretted it by now if I have given up. Thank you Ed! I do won you and I really appreciate you taking action to help me get back on track!

Ed did fantastic job on his Bio-titan but he continued with another model in the time that he had left until the end of March. As a result, he completed two projects! Here is the model he painted, Skitarii Onager Dunecrawler:

Well done, Ed! Keep up the great work, your models are fantastic! Here is the link to the post Ed wrote on this particular project:

Matt pledged new Mantic Giant for Monster March and I was really curious about this model. It looks really good on the official picture:

However, it was a busy month for Matt as he participated in some tournaments. I presume it took away spare time. Matt did write some battle reports and I must say I immensely enjoyed reading them! What is more, the reports featured Matt's beautifully modeled and painted Monsters, just see this example:

If you are interested in Kings of War, I recommend reading Matt's battle reports:

Nick did great with his fantastic model of Siliriah Spirit of the Woods! He was focused on the final result right from the start and it was fantastic to observe how his new model comes to life. Well done, Nick!

Congratulations on completing the pledge and on doing so as one of the first participants to finishing their projects!

Rory joined the pledge a bit later and mentioned that he is going to work on his Eldar Wraithknight. However, he wanted to make it relaxing project that would keep him going, without stressing out about the deadline.

I think it is a great goal in itself. We all often experience low energy, also in terms of hobby projects. It means that pushing harder may have opposite effects. Instead, one can focus on the process. The models do not have to be finished but as long as there are relatively painting sessions, all is great! Compare it to active recovery after tough training.

Here is what Rory has achieved in his active painting recovery mode :)

I think it is shaping up very nicely and here is the link to the blog post detailing the process so far:

Many thanks for your contribution and all the best with the project in the future!

Stats model of choice was Bloat Drone for his Nurgle Army. Not only he painted it to a fantastic standard but he also provided some incredibly useful tips on how to create these unreal effects!

Thank you very much for your fantastic contribution and all the effort put in writing excellent blog posts! Here is the link to the most recent one about Plague Drone:

Vince was worried that he may not be able to finish in time but he did it! Well done indeed! His Vampire can now show off on the parties riding his unique mount!

Vince on All Things Kings of War - Vampire Lord on Dragon

Many thanks to Vince for his regular contributions and well done on completing the project!

I am very happy to tell you that I managed to finish my project too! I was super excited about it as it was the first time I actively participated in the pledge. And it worked really well because I did focus on making time for painting the models.

These were unusual models for me to paint and I had to quickly develop the pattern that would fit the models but also linked them with the rest of the army. I did it by keeping the same style of the bases and painting the blades purple - this color is present in the army.

At the same time extensive drybrushing and using washes on the Shamblers and Wardens allowed me to obtain the effect of bark and constructs made out of trees. I plan to write a separate post with better photos at some stage to show the details better.

Many thanks for all and each one of you! I am extremely happy with this year challenge as we had a good number of participants and all of you contributed fantastic models, ideas etc. It was a privilege to host the challenge again and I will do my best to do it again next year!

I definitely learned new things from other painters and I am looking forward to the opportunities where I would be able to implement their tips and advice.

Please feel free to provide feedback on any aspect of the challenge.

Thank you and see you next year!
Posted by Swordmaster at 13:17