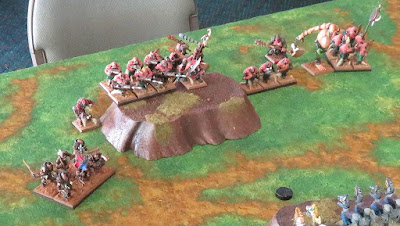 After a few games online on Universal Battle 2, I have had a good opportunity to play with real models again. We had a small, local tournament organized by Tas - Capitol Bash I.

There were only 7 of us participating. I think it was just unlucky coincidence that many regular players could not attend this time. The event was organize more as a relaxed group together so we did not use chess clocks. There were three rounds, armies were at 2250 points and Black Jack scoring system was used. The factions represented were: 2 x Ogres, Trident Realms, Kingdoms of Men, Forces of the Abyss, 2 x Elves.

Here are the details of the army John brought for this event:


The Multiple Horde Units army as opposed to MSU style force I fielded. I always find it very interesting and challenging to fight against such armies. Interesting, because it is good to see two forces representing different approach to warfare matched against each other. Challenging, because it often means that such army excels where mine is already weaker.

This is the case with the Ogres. They are excellent in straight up fight and would love to go for frontal charges. Their shooters can fight well too! Horde units have good nerve values, further backed up by good defense in general.

The army John brought had 12 elements, all of them scoring with the combined unit strength of 24. It means this army is well equipped to fulfill the scenario objectives.

My initial plan before we started discussing the scenario was to try and limit the targets for the Shooters (Edit: My apologies for marking them with "B" on the diagrams. For some reason I labeled them as boomers and only after the maps were ready I recalled they were, in fact, Shooters!). They are very dangerous for my small units but fortunately, they hit on 5+ so having any cover would help already.

I could potentially engage them in shooting duel but it was risky as I would need to get closer for all units to have them in range. While Shooters could have many of my regiments in range right from the start.

I had a bit of an advantage in speed and maneuverability so I was definitely thinking how to use that in this battle. While tough, Ogres may be defeated by combined charges or even frontal attacks if damaged already and attacked by right units. In my case, that would be a combined effort by Storm Wind Cavalry and most likely Drakon Riders, thanks to their longer charge range.

I used the same army as in the last game against The Herd and the details are below:


This army has thus 16 elements, 15 scoring units and total Unit Strength of 21. It looked like a I have an advantage in numbers and scoring elements (16 vs 12 and 15 vs 12, respectively). However, my army had lower combined Unit Strength.

The scenario for round 1 was Plunder. We chose tokens on both flanks to be worth 2 Victory Points (Orange markers) and those in the middle were worth 1 Victory Point each (White and Dark Purple tokens).

Because of that I decided to deploy the army in three groups. I positioned Chariots in the center as they could have a better choice of the targets, the hill provided a bit of a cover and they could assist the forces on either flank.

I deployed Forest Shamblers and Wardens in front of each 2VP token to be able to Vanguard towards them, then move to block the enemy and allow my own units to pick them up. If possible, both Wardens would pick these two tokens. That alone would allow me to gain an advantage in terms of the scenario.

Both flanking groups would then seek opportunities to outmaneuver their chosen targets and attack in combined charges whenever possible. If I succeeded in picking up the more valuable tokens, I would need to be patient with other units. However, in such cases attack may often be the best form of defense and I certainly had to do something about those Shooters. Otherwise, they would pick one unit at a time and quickly nullify any advantage in numbers I have.

Each group of the Elven units advanced along their designated direction, with Forest Shamblers leading the way and shielding the Wardens behind them.

The chariots in the center aimed at the Shooters and managed to inflict initial damage. However, not sufficient to impress the Ogres.

Feeling exceptionally brave thanks to the proximity of the Mammoth, the Goblins joined the beast and charged the Forest Shamblers. They were not able to withstand the attack and were overrun.

The Shooters engaged the Chariots in the duel at range and wavered fragile Elven unit.

Elven units charged immediately to avenge their companions. Red Goblins did not expect to be the main target of the attack and were routed as a result of the furious frontal charge by three Elven units.

At the same time the regiments on the right were maneuvering to secure the Loot and both Forest Wardens could claim the most valuable treasures.

War Chariots and one of the Nobles fell victim to the ranged attacks. Clearly, the shooting abilities of the Ogres were far more damaging.

The rest of the units tried to maneuver to guard from the Elven outflanking. However, the Mammoth was not able to defeat the Palace Guard alone and was in a bad spot for sure.

Being surrounded by the elite Elven infantry and attacked from the flank by the Drakon Riders, even the mighty Mammoth was not able to hold and was finally down.

With the left flank relatively secured for now, Elves focused their efforts on the right flank. Keeping Ogres at safe distance, they constantly threatened to attack.

Thinking the situation is under control, Elves lowered their guard. That was a huge mistake as the lone Army Standard charged in and inflicted enough damage to scatter the Palace Guard!

The units on the right flank, however, kept withdrawing to deny the Elves the opportunity for a flank attack.

Forest Warden on the left flank used his magical abilities to finish off the enemy Army Standard. However, the main attack of the Elven army was on the right flank. Elves noted some successes as two of the Ogre Warriors units could not hold their ground against determined charges of the Elven units.

The charge against Ogre units had its consequences. Although Ogre units perished, much harder hitting elements were intact and charged. Elven Knight were no match for a combined fury of the Giant and Grokagamok. While brave Noble had to face the might of the Siegebreakers all by himself.

Palace Guard and Drakon Lord attacked Siege Breakers and with the magical assistance of a Bane Chant spell, they managed to break the unit as well.

Last but not least, the Drakon Riders and Forest Shamblers attack the Giant but despite horrendous wounds, the stubborn monster refused to give up!

There were further consequences to the failure of defeating the Giant by the Elven units. First, it had a clear path to charge Windborne cavalry that got smashed in no time. What is worse, the unit lost its treasure as well.

Grokagamok added a unit of Drakon Riders to the collection of defeated foes as well. And finally, lone Drakon Lord on the left flank also succumbed to the Ogre Shooters, who turned out to be quite able melee fighters as well.

Seeing this, the remaining Elven units collected the treasure they already captured and withdrew before slower Ogres could catch them.

Many thanks to John for a great game! Unfortunately we run out of time to play 6th turn. At the end of the 5th I managed to control two more expensive Loot tokens and the one in the middle that allowed me to claim the victory. Together with the attrition the final result was 16:5 to Elves.

I think I was in a good position to defend the two tokens Forest Wardens were in control already and perhaps the charge of the Drakons would rout the Giant this time. I am sure, however, that if Grokagamok survived potential charge of Forest Shamblers and Palace Guard, there would have been more Elven casualties.

I am very happy the plan worked in general. However, I made some mistakes that could have been avoided.

First of all, I positioned Drakon Lord in turn 3 a bit too far from the Palace Guard so I had no chance to use his inspiring presence when the unit needed it.

Second, I should have taken into account the possibility of rolling double 1's against any of the enemy unit. So that the Giant could not have been able to charge Windborne cavalry, especially when they carried the Loot.

Fortunately for me, these mistakes did not result in the defeat but I did lose a few more units. Something that could have been avoided.

It was definitely good to play with the real models again!

Thanks for reading!
Posted by Swordmaster at 22:02