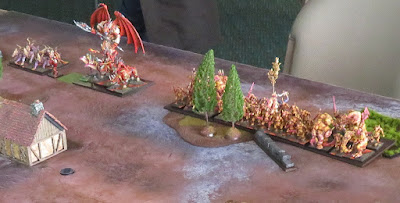 In the second round of the local tournament, Capitol Bash I,  I played against Nick who commanded beautifully modeled and painted army of Forces of the Abyss. I often wish I had more time in between the games or even a period long enough to show armies on display. Simply to wonder around and admire people's armies. This was such a case and I do hope to see Nick's army in action more often!

Forces of the Abyss is the foundation type of a faction for world of Mantica and I am glad to see it being represented. I have not had many opportunities to play against it and more importantly, I finally had an opportunity and great pleasure to play against Nick!

With CoK2019 updates, Force of the Abyss also received a few new things to try out and Nick chose quite a few new options. Here is the army he brought to the event:

Forces of the Abyss

This is one, quite intimidating army! To begin with, it is very resilient, as many units have Defense 4+/5+ and Regeneration 5+ together. It means that whatever damage is inflicted may still be healed back to the full strength.

It's offensive capacity is even more scary with Crushing Strength and Thunderous Charges all over the place, in addition to Fury as an army wide rule. This army will hit hard if you let it so I started wondering what can I do to mitigate these great advantages.

I noted that the units are a bit slower than those in my army. And apart from Twisted Victims, Archfiend and Basusu there are no flying units. It seemed that I had a bit of an advantage in speed and maneuverability.

While fearsome in melee, Molochs, Twisted Victims and Despoilers all hit on 4+. That meant that any terrain or obstacle would affect the attacking unit. Again, a thing that could be used to an advantage.

In summary, the army had 10 elements, 8 scoring and total unit strength of 23. I definitely had to use my shooting to good effect, hopefully to focus on a single target and eliminate it. That is often the goal anyway, but here it was important because of the regeneration and ability of many units to heal the damage.

As our forces were quite opposite in the way they would prefer to fight, my goal was to keep maneuvering and avoid protracted combat. Otherwise, I would play on enemy's terms.

This army has thus 16 elements, 15 scoring units and total Unit Strength of 21. This time, I had a significant advantage in both, number of units and those that could score. But the unit strength was a bit lower.

That further reinforced my approach of being patient, use speed and maneuverability to engineer multiple charges and shooting to create a bit of damage. Hopefully enough to destroy a unit.

In the second round we played Dominate as a scenario. Nick's army, with a lot of hordes that are good in a grind, was well prepared to fulfill the scenario objectives. I had to come up with a plan that did not involve head on attack because that would benefit the Forces of the Abyss. At the same time I could not avoid the fight because that would be almost an automatic defeat.

Hence the modification of the initial plan to take into account the scenario was as follows. I would still look for the opportunities to use the shooting to the advantage and speed and maneuverability to isolate enemy units.

First, I decided to use Forest Shamblers, Wardens and Palace Guard to stay close to the center and present the threat. In this way they would be able to advance if necessary but also provide significant unit strength to contest the middle.

Second, I grouped Nobles, Chariots, Windborne and Drakon Lord with the Diadem on one flank to be able to focus the shooting. But at the same time, with the presence of Storm Wind and Drakon Riders, these forces could attack as well.

However, I also kept Drakon Lord and Riders on left flank to create a small distraction and protect the rest of the army.

The idea was to win on the right while keep enemy forces in the center busy. If I could do it fast enough, and keep the enemy units on the left distracted, I should have been able to combine the efforts of center and right to dominate the battle field in the end.

Elves advanced towards their enemies with caution. Close enough to allow the shooters to attack from the distance and bring faster units to threaten charges. But keeping the safe distance and not getting into charge ranges of their foes.

The shooters focused their efforts on one of the Abyssal Despoilers hordes and magical wind pushed that group further away from the Elven battle line.

Forces of the Abyss - Turn 1

Surprisingly, the Forces of the Abyss did not rush towards the Elves at all. In fact, they stayed mostly in their initial positions, with units readjusting a bit here and there.

Elves decided to take the risk and move in a more aggressive manner. To make up for local numeric inferiority, Drakon Lord and Riders on the left flank, moved boldly and landed in between the enemy units. In this way they threatened flank attacks but remained relatively safe from the charges of the foes.

While the shooters continued attacking the same unit, Drakon Lord on the right flank charged another unit of Despoilers alone. This helped Storm Wind Cavalry and Drakon Riders to approach even closer. Thanks to that, the enemy had no option to move back and avoid being charged anymore.

Forces of the Abyss - Turn 2

It looked like the Forces of Abyss were awaiting some kind of signal from their masters as the units kept the distance and in general, refused to engage.

Only Basusu attacked on the left, to pin down Drakon Riders while nearby Despoilers turned to intercept them shortly after. Twisted Victims ignored Elven fliers altogether and did their own outflanking.

Last but not least, the Despoilers on the right counter charged the Drakon Lord but somehow their attack did not result in enough damage.


Drakon Lord moved back to make room for the Storm Wind and Drakon Riders to charge together against Abyssal Despoilers. The attack was truly powerful and the first Abyssal unit was routed. This success was quickly followed by another, this time the Elven shooters managed to inflict enough damage to destroy the second unit of enemy large cavalry. The first objective to win the flank was achieved by the Elven army.

In the meantime, Forest Shamblers turned towards the left and protected the flank of the Palace Guard from being attacked by Twisted Victims. Drakon Lord chased them too while Drakon Riders attacked the enemy to buy him more time.

Forces of the Abyss - Turn 3

Elven forces lost two units in quick succession, as neither Drakon Riders nor Noble in the Chariot were able to hold their ground against vicious attacks of the Abyssals.

The Archfiend finally attacked as well, leading the charge against Palace Guard, with Basusu hiding just behind and Lower Abyssals finally following.

Elves pressed the attack on the right and this time Forest Shamblers with Storm Wind cavalry teamed up to take on the Molochs. Well coordinated attack resulted in routing another powerful enemy unit.

The fight in the center became much more intense with both Palace Guard units attacking Arch fiend. However, despite that the monster was not easy to defeat and kept on fighting!

Elves had to address the problem of enemy unit that landed behind their lines too. This time the shooters focused on Twisted Victims to inflict damage from the distance. However, Windblast push from the Windborne cavalry allowed Forest Shamblers to attack the enemy from the flank shortly after. All thanks to the magical effects of the Surge. Unfortunately for Elves, the combined damage was not as they expected and enemy unit was still intact and ready to fight!

Forces of the Abyss - Turn 4

Despite their efforts, Elves could not prevent the enemies from attacking and three more units of the Elven army perished. It seemed like the Forces of the Abyss are now in full possession of the control over the center of the battle field.

Although losing three units in one go is a huge disadvantage, Elves did not give up! They kept attacking instead.

Forest Shamblers were assisted by War Chariots this time and Twisted Victims were defeated. Windborne Cavalry teamed up with Forest Warden, and they brought down the wounded Archfiend with ranged attacks.

The Drakon Lord that was ignored by the Abyssal Despoilers, attacked them from the unexpected direction and defeated them all by himself!

Finally, the forces on the flank all charged Lower Abyssals. Although the damage was significant, it was not yet enough to rout that unit.

Forces of the Abyss - Turn 5

There were very few units the Forces of Abyss have had left. Molochs and Lower Abyssals both attacked one Elven unit but neither of them succeeded in routing their enemies.

Even Basusu could not defeat Elven Drakon Lord.

Elven forces attacked remaining two units of the Abyssals and both hordes were routed. Remaining units converged towards the center and it was clear Elves carried the day!


Many thanks to Nick for a fantastic game! It was great to finally play against each other and I hope we will have more games in the future.

The Forces of the Abyss are really tough! Very often I had to hit with multiple unit and multiple times to defeat them. But when they hit back, more often than not my units were dead. Hence it was really great to achieve a victory against such resilient army.

I am glad my plan worked. First, I did not wait too long to attack on the right flank. I remember my previous games where I tried to get closer to the enemy, it moved back and for three turns we did not even fight. It was important to be able to win on the flank fast as I was concerned my units in the center were too fragile to hold on for long alone.

I made a mistake when I forgot that unlike regular Tortured Souls, Twisted Victims do not shamble. I left the opening and they landed behind my lines. I was very happy I spotted the opportunity to mitigate that and used both Windblast and Surge to an interesting effect. I just did not take into account how far I can push the enemy and did not block its passage when the units survived the attack. Nevertheless, the idea is sound and I was very happy I Surged my own unit into a fight for the first time ever! :)

It was good to have more units as I could afford to use some of them (like Forest Shamblers and Noble Chariots) to shield advancing infantry. And interestingly, thanks to smaller bases, I could group quite a few of them in the center in the end.

Posted by Swordmaster at 18:56