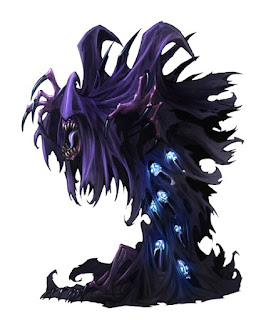 In the game 4 I played against the army that is going to be (or is already becoming) a very popular choice thanks to the new Mantic releases - the Night Stalkers. I played against Sean who is getting back to wargaming with this army. We played against each other long time ago so it is great to have him back. I am sure he has an eye on the new concept art and models and I am looking forward to seeing how is he going to develop his force.

I had a few games against the Night Stalkers but I haven't had a chance to play against some of Sean's choices. I was also very curious how to play against them at small points and I was really looking forward to our game. Here are the details of the army list:


Let's go through the details as there are some interesting choices there:

20 Reapers - I don''t know why I labeled them Soul Reavers initially (and you will see them as such on the diagrams) but I guess Reapers can be a terrifying enemy that destroys bodies and souls alike! They are very good at dealing damage thanks to good number of attacks, hitting on 3+ and with Crushing Strength 1. They also have a nice nerve value as Night Stalkers usually do. It means that in order to contain them I may either try to shoot at them first and then engage in melee. But in any case I need some better than average odds in order to destroy them before they counter attack.

20 Doppelgangers - that's quite tricky regiment. They may not look like something threatening on their own but if they have a chance to pick the fight or counter attack the enemy with good melee abilities then there may be a nasty surprise. Definitely a unit to watch out for.

2 x 10 Spectres - these are, on the other hand, well known to me. My own shooters have the advantage over them in terms of range but they tend to sit in some kind of cover so it is not easy to get rid of them. And I would need to at least limit their efficiency because they can quickly evaporate my units.

10 Phantoms - it may be a simplification but somehow Phantoms remind me about Undead Wraiths. They both Fly but are Shambling. Both have Crushing Strength 1 and can be a nasty surprise when allowed to attack the flank of any unit.

3 Nightmares - this flying large cavalry is not a surprise either. A very good and flexible unit but the main question I had here was "Would I see Wind Blast used?" :) I think it is often tricky to use because on hand the flying cavalry wants to move at top speed to get to the right positions but on the other it has to slow down to use the Wind Blast. The priority would be to catch them somehow as I cannot allow such a fast and maneuverable unit to threaten my regiments, especially when allowed to go behind the lines.

Horror - Horror's job is to Surge Phantoms :) It may not be as efficient in it as Undead heroes but it has the tools for the job. It does look very fragile though so I was curious how Sean is going to use it.

Planar Apparition - a very good supporting monster, hard to kill too. It may help with healing the units that despite good nerve values don't usually sport a lot of armor. But if left unattended it also can deal some damage by attacking exposed flanks.

I believed I had some advantage in the speed and maneuverability, I had a chance to shoot from greater range too so I wanted to use these options. Due to the fact we had a similar number of units it would also matter who starts losing them first.


We played Control that was modified for the purpose of the smaller tables. We still had 24" x 24" zones but there were only 4 of them instead of 6. Because of that, for me the top right corner zone would be worth 2 points and all others are 1 point. For Sean, bottom left gives 2 points.

Interestingly, he completely gave up the top right corner but at the same time deployed entire army to push towards the bottom left. I started deploying with the shooters so I didn't get good Line of Sight to many enemy units. However, I was going to use given opportunity to move in outflanking maneuvers and keep Silver Breeze units as a second line. Each was to hold 1 zone, bottom and top right while their range would allow them to shoot at the enemies from the safe distance.

At the same time I intended to keep left Drakon Riders and Palace Guard units as blocking elements to slow down the advance of the enemy towards my deployment zone. That would also allow the units that were outflanking to be in the position for the coordinated attacks in time.

I got the first turn again.

Elves implemented their battle plan immediately by sending drakon riders on the right flank to threaten enemy formation from that direction. The units in the center advanced too and the shooters aimed at the Spectres and surprisingly wavered them. Good start!

The Night Stalkers didn't want to leave the protection of the Twilight Glade and only shifted positions to respond to the Elven maneuvering. Planar Apparition used the time to heal the damaged Spectres.

Elves continue maneuvering around the enemy flank but this time they take a bit of a risk by exposing some of the units for a charge of the Nigthmares. Will they take the bait?

Nightmares did take the bait and attacked Drakon Riders but failed to inflict enough damage to even waver them. Now they were in a very difficult position and had to brace for incoming counter attack.

The rest of the army still didn't move forward much but advanced at a slow pace.

Drakon Riders and War Chariots teamed up to get rid of the Nightmares. Thanks to that Drakon Lord could move fast forward and start threatening enemy formation from the rear.

In the South Palace Guard moved forward to tempt more charges of the enemy while other units waited for the opportunity to counter attack.

Night Stalkers did not move out of the corner and kept tight formation. Phantoms moved around to be ready to intercept Drakon Lord but Reapers charged and routed the troop of Palace Guard.

Drakon Riders attacked the Spectres in order to prevent them from shooting but the damage was not enough to rout them and Elven flying cavalry was in a dangerous spot now.

The sacrifice by Palace Guard didn't pay off either as Reapers pulled back and the second unit of the Elven elite infantry was too far to assist Drakon Riders. The Army Standard took on himself to keep distracting the enemy so that his companions can prepare a better counter.

The Drakon Riders paid the ultimate price for over committing in their last attack. Phantoms, supported by the evil magic, were teleported into the flank of the Elven unit and routed it. Also the Army Standard was no match for the Reapers.

It was time for the Elves to counter attack if they wanted to contain the Night Stalkers and not allow them to break the encirclement. Drakon riders and Palace Guard attacked exposed Reapers and this time the unit perished.

The War Chariots attacked the Phantoms to prevent them from flying away and to block Spectres from seeing any other targets.

Almost entire army of the Night Stalkers hid in the forest and although Phantoms tried to get rid of the Chariots they could not do it. The army was literally cornered.

Arrogant Elves decided it is a perfect moment to attack many enemy units at the same time and that didn't work in their favor. All the attacked enemies held their ground and Elves had to brace for the impact.

Night Stalkers smelled the opportunity and attacked unsupported Palace Guard that could not hold against combined charge of the Phantoms and Doppelgangers. That allowed these two units to move forward and Phantoms finally invaded Elven territory.

However, that was too late and Elves still claimed the control over the battle field. Just!

That was close! Many thanks for Sean for a great game! I really hope he is back for good and that he will be a regular participant of the tournaments and casual gaming nights.

In the end Elves controlled 2 zones for 3 victory points while Night Stalkers claimed 1 zone for 2 points. The 4th zone was contested and that is a very lucky turn of events for me after that huge blunder in turn 6.

Instead of dispersing forces and not routing a single unit I should have attacked damaged Doppelgangers with Drakon Riders and Palace Guard as even the frontal charge should have given me the opportunity to rout the unit. Then I could withdraw them to keep my own zone controlled. Or even better, advance with the Drakon Riders and pull back with the Palace Guard for the potential chance to control all of the zones.

It was serious blunder and could potentially lead to a draw. In terms of attrition we actually had almost identical amount of points routed so I claimed the very minimum for the victory conditions.

I am glad I got lucky but not so happy that after patient maneuvering and keeping the enemy army in the corner I almost lost it all.

Posted by Swordmaster at 22:48