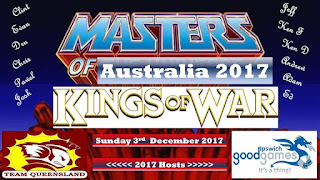 Today in Armies of Australian Masters 2017 we have the only representative of Ratkin army commanded by Dru. He switched to this force relatively recently but that was a good decision as he was very successful with it.  He won one of the local events and finished 3rd during his last tournament with it.

What is also interesting is that there are two other Master players who are known for playing with Ratkin but decided not to choose this army this time.

20 Tunnel Slaves, Regiment
This is an army with a large body count, a lot of shooting and 13 elements, the number that according to Ratkin philosophy should ensure good fortunes. There is a lot of melee potential due to the presence of horde units that are designed to do damage in close combat as well as thanks to Death Engines and Daemonspawn.

Let's have a closer look at the particular choices Dru made in composing his army:

2 x 40 Shock Troops - Shock Troops consist of those individuals who were born bigger, stronger, and meaner that their siblings.

These two units can do a lot of damage despite hitting on 4+. The combination of Elite, Vicious and Crushing Strength (1) is a very powerful combination. They also help other units to keep on fighting longer thanks to Rally (1).

40 Blight - The Blight are foul, noxious beings, infected with all manner of hideous diseases. They are accompanied by a suffocating miasma of pestilence which often assaults the enemy before the Blight even arrive.

This unit does not have a lo of armor but makes up for it with being very reliable as it cannot be wavered. It can mitigate the damage done thanks to Stealth and Ensnare special rules too. While 30 attacks alone should result in consisten amount of damage dealt in melee.

3 x 20 Slaves - Scrawny, malnourished and the lowest of the low; when they are not cannon fodder for the enemy they are just fodder for the rest of the ratkin army. These destitute beings are a rag-tag collection of many races, all as broken 2and mindless as one another..

Cannon fodder but with a very good nerve, especially in the presence of rallying units these regiments can be truly annoying to the enemy.

2 x Weapon Team - All manner of looted Abyssal Dwarf weaponry, or even bizarre contraptions of the ratkin’s own cruel design are employed by those mad enough to see what happens when you pull the trigger.

Very maneuverable with effective shooting range 18", weapon teams are close range support for the combat orientated infantry. Armor Piercing (1) upgrade should ensure that any hit does damage too.

2 x Death Engine - Strange, rickety contraptions crewed by “volunteers”; no two are ever of the same design. A bizarre mix of arcane science and cunning sorcery, the Death Engine rumbles and grinds its way through the enemy ranks striking out with dark energies at those it cannot crush beneath its churning wheels and spinning blades.

Death Engines are reliable and versatile constructions that can support nearby troops or be deployed on their own. Upgraded with Vile Sorcery it now adds to the ranged attacks of the army with efficient range of 24" for the randomly generated number of fire bolts.

Warlock - The warlocks study the dark arts – magic and sorcery from the depths of the Abyss. They are twisted, evil individuals but cunning and dangerous too.

Warlock is a very versatile hero that supports the troops providing Inspire presence, can add to the ranged attacks with Lightning Bolt (5) or cast Bane Chant (3), in particular at melee specialists to ensure maximum damage is done.

Swarm-crier - Bones, dried skin, fur and skulls are all used in the construction of the ratkin’s war banners and totems. Carrying these trophies and decorated with the unfathomable runes of the underworld are blind, bloated albino rats that march alongside the pack screeching their hate.

Another source of Inspire and Bane Chant, the swarm-carrier may not be as versatile as the Warlock but is a very good support for the army too.

Daemonspawn - The most powerful (and foolish) Warlocks know how to summon Demonspawn from the depths of the Abyss to march alongside the pack and terrorise their foe.

The most powerful element of the army, Daemonspawn is really dangerous in melee with a huge amount of attacks it generates. At the same time it is also source of Inspire Presence and Rallying! (2) so nearby troops will definitely benefit if it is around. On top of that it is yet another spell caster, adding Lightning Bolt (5) to the already impressive shooting abilities of the army.

Posted by Swordmaster at 12:54