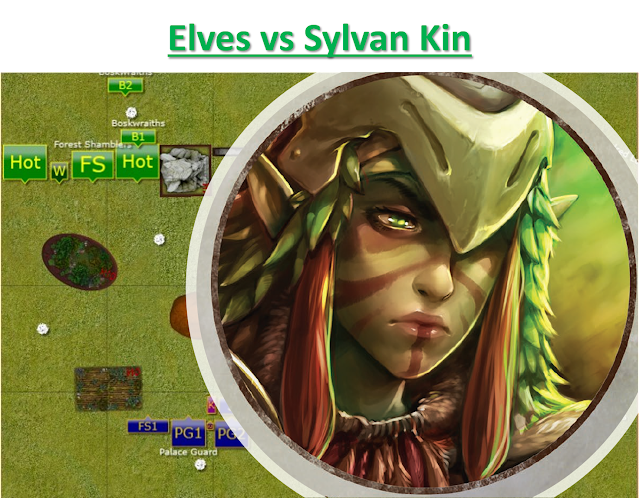 In the third round of the Rage of Isolation 4 online tournament, played on Universal Battle 2, I played against a second army of Sylvan Kin. This time, however, commanded by the Tournament Organizer himself - Michael.

I believe Michael 3d-printed some of his models for a brand new army at that time already and was testing some of the options online. From my point of view, as an opponent, it was very interesting to see a different approach to army composition than in the case of Nick's army. Even if there were a few elements that were exactly the same, the army looked different and thought it would play differently as well. Here are the details:

This army has 10 elements, 9 of which are scoring and the total unit strength is 20. Although it looks smaller, there are some really tough units there. Wiltfather, Dragon Lord and Forest Guard horde make up almost half of the army's points and all are capable of routing any of my units on their own. Either by grinding them down or destroying them in a single turn.

Hence I wanted to be careful around them and either avoid them, slow them down or make sure to engage only with a few units of my own.

Apart from the big guys, what caught my attention is the fact that almost entire army has Pathfinder special skill. This meant I would prefer not to fight in any terrain while I fully expected that Michael would like exactly the opposite!

I was very curious about the Hunters. I have not seen them in action before. They can Scout which means that there were 4 units in Michael's army that can do it and put the pressure on my units early on. The Hunters have 15 attacks, hitting on 3+ which is dangerous on its own against my 4+ defence regiments. They can be potentially supported by the Bane Chant spell, if Army Standard is nearby. In addition, as they have Verdant special rule, Wiltfather's aura would make them even more efficient in the melee. And their own Defence 5+ would also help them stick in the fight longer.

In general, the army is close combat focused so naturally, I would seek opportunities to inflict some damage with my shooting first. It would be beneficial also because of the fact there are fewer units in the opposing force. Any casualty before the inevitable fight would be even more beneficial and should open more space for manoeuvrers.

My army for the reference:

In this round we played Salt the Earth as a scenario. I decided to gamble and place my tokens as if I had a choice to pick sides. I thus assumed I would be taking Southern deployment and placed the tokens accordingly.

I decided to place all the tokens a bit away from the edge of the deployment zone in the way that would allow me to control all three without the need to move. Be relatively close to each other so that I could relocate the units to control them if needed or burn them if it was not possible to keep them.

The gamble paid off as I ended up with the Southern deployment zone.

I kept my shooters in the centre so that I could threaten any enemy attempting to park there and control the middle token. It would also allow me to choose which flank I can support. It helped because Michael decided to split his forces between two flanks.

I kept Stormwind and Drakon Riders until the end for the deployment drops and seeing how Sylvan Kin arranged the army, I decided to defend on the left and attack on the right. In this way, I hoped to inflict some casualties via shooting and slow down advancing units on the left. While I also wanted to isolate enemy cavalry and block the Dragon on the right.

Wiltfather led his children across the forest and towards one of the hidden treasures. One regiment of the Hunters turned towards the centre, using the shadow of the hill to conceal this manoeuvre.

The rest of the army on the opposite flank also advanced but kept the distance away from the enemy Drakon Riders.

The Outcasts re-positioned some of the units in order to get them in range for the shooting attacks and directed the fire against enemy Forest Shamblers. The rest of the infantry on the Western flank kept the distance from the approaching Sylvan Kin. The shooting was very efficient, although the Forest Shamblers did not care and did not slow down.

On the Eastern front the Drakons and Stormwind cavalry formed the crescent where units supported each other. With the regiment on the extreme flank tempting the Dragon Lord to commit early.

The Dragon Lord decided to attack on his own in an attempt to break through the regiment of Drakon Riders and to get into unprotected flank of the enemy army. Unfortunately, the charge failed and it looked like he is in trouble.

Wilfather spearheaded the advance on the opposite end of the battle field, unleashing the power of Aura of Death.

Elves were not intimidated by the early attacks of the enemies most powerful heroes and counter attacked! On the Western flank, the Palace Guard regiments bypassed Wiltfather and charged damaged Forest Shamblers. The frontal attack was successful and the regiments advanced towards the Hunters of the Wild.

With the enemies distracted or not in position to attack, Silverbreeze units aimed at the exposed Boskwraiths and routed them as well.

The biggest success, however, was the opportunity to charge the Dragon Lord. The flank attack, shielded by the Drakon Riders, resulted in capturing the enemy general!

Sylvan Kin army, despite heavy losses, had no other option but to keep on fighting. The Hunters and Stormwind cavalry charged their opponents but only the knights succeeded in routing their enemies.

In such circumstances, Sylvan Kin regiments started burring down the treasures so that they would not fall into enemy's hands.

The Outcasts continued trading blows and once again their attacks were more successful. Two more regiments of the Sylvan Kin army were defeated. However, the Forest Guard and Wiltfather were fully intact and kept on fighting.

Forest Shamblers regiment bravely stood their ground but neither of them was a match for Wiltfather or the Forest Guard.

The Hunters withdrew to destroy another piece of treasure and braced for the incoming attacks.

Despite defiance the Sylvan Kin showed in the face of the overwhelming odds, it turned out to be the last stand. Badly damaged Hunters of the Wild were finished by the Palace Guard and the shooters picked isolated and exposed Boskwraiths.

Even the Forest Guard was not able to hold its ground against a massive frontal charge of three enemy units at the same time.

It was thus clear that the Outcasts were victorious. Wilthfather surveyed the battle field one more time and withdrew, not disturbed by the enemy.

Many thanks to Michael for a game! I am really sorry it turned out so bad for him. We decided by the end of turn 4 that there is no need to continue as he was left with Wiltfather only. We agreed that he would most likely survive the battle anyway.

The good thing is that Michael continued with his Sylvan Kin army and with the force almost identical to the one he used in this event, he placed 7th out of 30 or so players at the most recent Clash of Kings Australia. So clearly, the army is good and he can use it to a great effect!

I am sure that if we play next time, the game is going to be completely different!

Posted by Swordmaster at 21:01