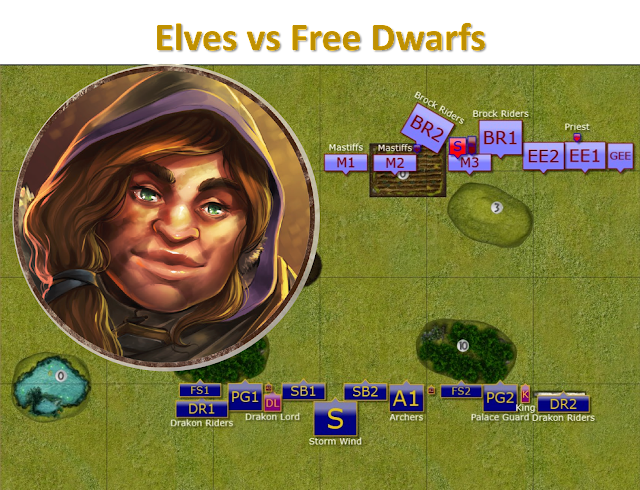 This is the battle report from the very first game I played in 2021. Yes, I know, a bit late and I apologize to Ed, my opponent, that it took me so long to get back to our battle. However, I hope it was worth waiting for as I think the game was very interesting and was not resolved until the very end!

Ed decided to use Free Dwarfs army this time. I still have the impression that this army is not quite popular and I was curious what would be Ed's approach to the composition. Here are the details:

This army has 12 units, 9 of which are scoring and the total unit strength is 17. You can tell that Ed is definitely a dog person :)

I find the Throwing Mastiffs quite dangerous to my troops in particular. It is because their effective range is 18" (6" move + 12" ranged attack), exactly the same as the shooting range of Silverbreeze cavalry. Hence, my fast cavalry can be in the immediate danger if I chose to use it to shoot at the Mastiffs. I thus needed to make sure I can eliminate them before they release the Throwing Mastiffs.

It is also important to rout them because otherwise they can be used as a shield for the more fragile Brock Riders, the main target for my shooting.

Speaking of which, Ed brought 2 regiments of those, one with Pathfinder and one with Brew of Haste. Combined with the Wild Charge (+1) special rule from Sveri, these regiments are quite fast. Only my fliers could outpace them. While taking the charge usually is not an option due the sheer number of attacks they have.

Earth Elementals, on the other hand, are quite opposite. They are slow but really tough. The only element they share with the Brock Riders is the fact that neither of them can be wavered. Ed assembled a very reliable army that would keep coming at you no matter what.

The element I noticed, however, was that the army has lower number of scoring units. What is more, Mastiffs and Brock Riders seemed to be good targets for shooting so I wanted to use that to my advantage. If I could eliminate these units with the combination of shooting and melee attacks and avoid slower Earth Elementals, perhaps I would have gained enough advantage in scoring units to win the scenario. Whichever that may be, it could be beneficial to increase that advantage.

In this game we played Control as the scenario. Interestingly, Ed deployed his army in a tight formation and completely neglected one of the flanks. I assumed he planned to control 4 out of 6 potential zones, which would still give him the victory. In particular if he could gain 2 points from my central deployment zone while denying the same to me.

I intended to continue with my initial plan to use the shooting to soften the enemy before the melee. Hence, I deployed my shooters in the centre as I thought I would have more flexibility in choosing the targets. It looked like I would do so by focusing on Mastiffs first.

I must admit I did not quite anticipate that Ed would deploy his army only on one half of the battle field, so I started deploying wider. However, it allowed me to move one flank force faster and delay with the opposite one. Especially, that it would take some time for the Elementals to cross the distance between both deployment zones.

The full plan, thus, was to shoot down as many units as possible, use the freedom of movement on the left flank and eliminate Brock Riders regiments. In this way, I should have significant advantage in the number of scoring units I could use to disperse and control multiple zones by the end of the game.

Free Dwarfs moved forward at the steady pace. The Brock Riders moved patiently behind a few packs of Mastiffs. While the Earth Elementals shambled forward slowly but purposefully.

Craggoth & Kholearm spearheaded the advance on the Estern flank and got an early opportunity to use their ranged attacks. That surprised the Drakon Riders that did not expect any shooting just yet.

Elves used the opportunity that the forces on the Western flank had absolutely no opposition and begun their outflanking manoeuvre. At the same time the fast cavalry and archers focused on eliminating Mastiffs. One pack was routed and the second one suffered some minor damage.

The units on the Eastern flank moved backwards a little, to make sure they are not in range of the enemy.

This time it was Dwarven turn to "shoot". The Mastiffs were unleashed and one of the Silverbreeze troops had to flee the battle, chased by the packs of vicious dogs.

The rest of the army advanced as normal, turning slightly towards the centre of the battle field.

Elves continued the plan execution knowing that it would pay off to be patient. Despite the loss of one of the Silverbreeze cavalry units, the shooting continued and one of the Mastiffs pack was wavered.

The rest of the army continued outflanking (on the West) and withdrawing (on the East).

Earth Elementals kept advancing as there was really no other choice since Elves did not seem to want to commit to the fight. At the same time, Brock Riders did not move forward much, aware of the outflanking Elven forces.

Only the Packmaster stepped forward and released his personal pack of Mastiffs to attack the Silverbreeze cavalry.

Elves still did not want to commit to melee and kept shooting at their enemies. As a result, the second pack of Mastiffs was routed. The units on the Easter front moved back and Palace Guard braced for impact as it was not possible to avoid the attack of the Elementals anymore.

Finally, Dwarven units were able to charge some enemies! On the East, the Elementals did not give a chance to the Palace Guard and routed the Elves quickly.

On the West, the Brock Riders charged the Forest Shamblers but this regiment held its ground.

If Elven army appeared to be idle, it has just made up for it. However, a lot of the attacks were blocking charges to allow other elements to continue the fight and reposition.

First, the Forest Shamblers kept Brock Riders Busy and Drakon Riders distracting the Berserker Lord. Drakon Lord challenged Sveri to a personal combat while Palace Guard captured the Packmaster. All to allow Stormwind and Silverbreeze to get rid of the last Mastiffs pack. And with Silverbreeze and Archers blocking the path, Stormwind was free to counter any charge second Brock Riders would be willing to execute.

Finally, Forest Shamblers, the King and Drakon Riders attacked the Elementals but the charge was a huge disappointment.

The next wave of the Dwarven attacks proved to be quite devastating. Elves lost no less than 4 units and the attack on the East was powerful in particular. Craggoth & Kholearm attacked the Elven King who was not able to hold his ground. The momentum allowed Craggoth & Kholearm to smash into the flank of the Forest Shamblers and destroy them as well. Nearby Drakon Riders did not stand a chance either, as they were attacked by another horde of Elementals from the most vulnerable direction.

Despite the heavy losses, Elves were not without the options to punch back. Palace Guard and Archers attacked Sveri, that resulted in significant damage inflicted. What is more, it allowed Elven unit to escape Elementals (for now!) and move to control enemy territory!

Stormwind cavalry was in a difficult spot so it had to take the gamble. The Elven knights charged Brock Riders, routed them and had enough of the momentum to move away from the charge range of the Elementals as well!

It was quite a peculiar situation. Elves were losing units fast but were still in a good fighting position. Dwarfs, and Elementals in particular, took much less damage, but were a bit too far from the action. It was thus only the Brock Riders that succeeded in routing another enemy unit. While both, Berserker Lord and Sveri were not able to inflict sufficient amount of damage to destroy their foes.

The only hope was if Elementals were surged by the Stone Priest far enough to join the fight. Unfortunately for Dwarfs, they failed to do so.

It looked like the fight was at a stalemate at this stage. Elven regiments fought hard but the stubborn Dowarven heroes refused to give ground! There were no more losses on the Dwarven side however, somehow, Elves managed to steal the victory from them!

When the dust settled and both armies disengaged to re-group it turned out that Elves achieved marginal tactical advantage and could claim the victory.

Many thanks to Ed for a great game! It was fantastic to play again and it was the type of battle I wanted to open new year with!

I must admit I thought I actually lost the game and only after the roll for 7th turn was made and we started to look at the situation, Ed mentioned that it may be my victory. I was really lucky here, because turn 7 would definitely shift things back to Ed's favour.

I hope Ed will be able to provide some comments from his end (provided he still remembers that game! He had many more after this one for sure :)), so at this stage I am going to focus on my side of the battle.

One of the reasons I delayed any action was because I did not manoeuvre well on the Western flank. In particular, the way Forest Shamblers and Drakon Riders blocked each other more than helped and supported the other regiment was the reason the advance was slow there. The main mistake I made there was to position Drakon Riders in a way that did not allow me to attack together with Forest Shamblers against Brock Riders. I could only attack with one or the other but not both (this is due to the relative position of the respective leader points).

Second, instead of charging the flank of the Elementals with the Drakons in Turn 4, I think I could fly to the side to avoid Greater Earth Elemental but still be out of range of the second horde of the Elementals. In this way, I could have that unit annoying the enemies by just being there. And either be able to attack or fly to another zone to make sure I control it. In particular if we ended up with turn 7.

The fact that Stormwind cavalry advanced far enough to avoid being charged and as a result, contested the control over this zone was very lucky. In addition, Elementals falling short with Surge against the Archers was also lucky for me. Because of that I could control the top right zone.

I guess it shows that sometimes you just need to be lucky! I am sure next time we play the dice will favour Ed to make things equal!

Posted by Swordmaster at 14:42