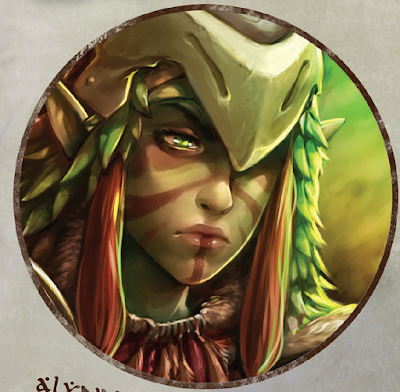 Welcome to the first battle report from the series of 4 games in the frame of online tournament - Rage of Isolation 4. This was the last event of 2020 I participated in. It was organized by Michael Clarke and the games were played in November and December last year on Universal Battle. Here is the link to the FB page for that tournament where you can find more details on each round as well as a player's pack:

This time the rules were really simple. 2000 points armies, preselected scenarios and maps each turn but that's about it. No special rules this time, to make it nice and easy!

In the first round I got paired with Nick Legrand who brought a Silvan Kin army for this event. Interestingly, we participated in many events together but for some reason, we have only played against each other once. And even then it was almost 8 years ago at ConVic 2013 when we both played a different game. However, it brings some memories too so here is the link to that game, in what now seems a different reality :)

I have played a few games against Sylvan Kin so far but Nick designed his army around a different concept. It was a very interesting combination of variety of units rather than focus on a single aspect, such as Forest Shamblers for example.

Here are the details of the army Nick used in this game and the tournament:

Nick's army has 12 units, 10 of them are scoring and the total unit strength is 18. I think it is a good example of a combined arms force.

The elements I looked at in the first place were the shooting units. Probably because other Silvan Kin armies I played against did not have many of them! 2 Kindred Archers regiments and 2 Kindred Gladestalkers troops provide enough ranged attacks to harm defence 4+ units. If the fire is focused, then even defence 5 units may suffer too. I would need to be careful how to approach these units before they can inflict damage to some of my more fragile troops in particular.

It was clear to me, however, that the shooting was playing supportive role in Nick's army. There were a few heavy hitters I had to tackle somehow. Both, Forest Guard and Stormwind had enough hitting power to rout any of my units on the charge. The fact they are both having Pathfinder special rule made them even more dangerous. And then, of course, we have Wiltfather, capable of holding the line on his own and grinding any enemy down.

As I did not have an opportunity to play against Boskwraiths before, I was also curious about them. They look a bit fragile so I did not expect them to be at the frontline. However, with Wild Charge they can potentially surprise the opponents with a longer charge. Have 20 attacks with Elite and Fury helps to mitigate the effects of wavering in melee.

In general, I thought I should try to use my speed advantage and intercept slower and more fragile elements of Nick's army. While using my own shooting to win the ranged attacks duel. If that works, I should be able to create a few holes in the enemy battle line and hopefully exploit these to set up advantageous combined charges. Especially against Forest Guard and Stormwind.

Here is the version of the army I decided to use in this tournament:

In the first round we played Raze as a scenario. In this game I decided to focus on one flank and try to get to the two objectives across the battle field. I planned that because if Nick decided to place his tokens on the opposite flank, then it would probably mean I would have fewer units to deal with initially. If he decided to place 2 out 3 objectives on the same flank, it works too because I can block his own regiments from reaching them.

It turned out we both placed the majority of the objectives on the same side. In such configurations I wanted to seek the opportunity to use my own shooting to some effect as I could focus fire on a single target. Nick, on the other hand, decided to spread his ranged attacks.

While I would have to deal with Wiltfather on the right flank, I thought I should be able to intercept Boskwraiths, rout Forestshamblers and position Stormwind in outflanking manoeuvre, before the Forest Guard would be in the position to attack my units. In this way I wanted to win on this flank but I needed to make sure that this attack is swift enough and that the enemy Stormwind in particular does not come to the rescue. For that reason I placed Drakon Riders and Forest Shamblers on the centre left to slow down the enemy advance.

Sylvan Kin army advanced, with scouting units leading the way. The advance was not at full speed across the battle field yet but the units on the Western flank moved fast.

And then, in a display of extraordinary marksmanship, the Gladestalkers shot the Drakon Riders down from the sky. Sylvan Kin army gained a very important tactical advantage very early in the battle!

Outcasts still had to advance to secure the objectives and prevent the enemy from reaching their own. The army advanced but slowly, making sure not to get into charge range of some of the Wiltfather in particular.

Then they opened fire as well but despite inflicting some damage to the Forest Shamblers, they were not able to rout them yet.

Sylvan Kin regiments focused now on keeping their enemies in the corner. Wiltfather led the way and his Cloak of Death powers started affecting the foes already.

In the meantime, and where it was possible, Archers and Gladestalkers continued shooting as well. This time, it was not as devastating but every point of damage counted!

The Outcasts had to attack to break from the encirclement and to execute the plan to surround the Forest Guard. Stormwind cavalry led the attack and charged enemy Archers in the open. That was relatively easy target and Elven knights routed the foe.

Forest Shamblers managed to get a flank charge against their counterparts and destroyed them as well. To buy some more time, the Drakon Lord charged the Forest Guard all by himself. That also allowed the Drakon Riders to attack Boskwraiths but unfortunately, that attack failed. It was bad news for the Outcasts, as they needed to clear out the field to be able to co-ordinate the next wave of the attacks.

Furious Boskwraiths counter attacked and with the help of El'Rik Nsileen, managed to rout the Drakon Riders! What is more, they could now block the Stormwind cavalry and protect the Forest Guard from the potentially devastating flank charge.

It looked like Sylvan Kin regiments managed to stop the enemy encirclement.

The Outcasts were forced into defensive positions. They managed to get rid of the annoying Boskwraiths but the threat of the enemy cavalry attacking kept the Palace Guard hiding behind the hill.

Instead, Elves attempted to do some damage with the shooting but it simply did not work well at all.

With momentum of the attack lost, the Outcasts were now on the receiving end of the counter charges from the Sylvan Kin army. As a result and due to previously sustained damage, three regiments and the Drakon Lord perished!

The Outcasts change the direction of the attack, in an attempt to catch the enemy cavalry off guard and move out of attack range of the Forest Guard and Wiltfather.

To make it work the shooting needed to be effective but once again, despite the best efforts, the damage was negligible.

Such hasty manoeuvres, with the enemy nearby, often result in some mistakes. Unfortunately for the Outcasts, it happened here as well. Sylvan Kin regiments quickly capitalized on that and the Outcasts lost their fast cavalry units.

After sustaining heavy losses and with significantly reduced firepower, the Outcasts prepared for their last stand.

Sylvan Kin regiments attacked again and as a result, one Palace Guard regiment was routed while the other barely held its ground.

In a small act of revenge, Archers charged the Gladestalkers and defeated them in melee. That allowed the Outcast to claim the central objective but the battle was still lost. Sylvan Kin army was victorious!

Many thanks to Nick for a great game and congratulations on the well deserved victory! Nick was patient and waited for any potential openings and exploited my mistakes very well.

I really liked how he used Forest Guard to effectively blocking me from claiming either of the two objectives with its superior unit strength and wide frontage. In this way he used a single unit to do so!

He also used his Gladestalkers very well, I did not take into account the fact that scout move may position them well and allow to shoot at the Drakon Riders without cover penalty.

In the end, he also claimed all of his objectives and only the fact that we did not get turn 7 allowed me to keep the centre and some units alive.

There were quite a number of things I should have done better but I wanted to focus on the attack on the right flank first. I think the idea was good, I just did not commit sufficient forces to make it work. What I mean by that is that the fact the Drakon Riders did not defeat the Boskwraiths had some very significant consequences. It stopped my units, prevented them from attacking the Forest Guard and disorganized their manoeuvres. I think I should have sent the King to help as his 5 attacks would have definitely shifted the odds even more in my favour.

I then tried really hard to inflict damage with the shooting and failed miserably. Looking back at the situation, I should have moved with Palace Guard to the hill and shield them with Silverbreeze cavalry. In this way I had a chance to attack earlier.

In general, I usually succeed in the games when I can combine the efforts of different units and don't rely on one arm to win the battles. Here, I put all my faith in shooting where I should have positioned the units better to be able to attack regardless.

It is always great to learn a few new things and I am very happy I got a chance to play against Nick after all these years.

Posted by Swordmaster at 23:10