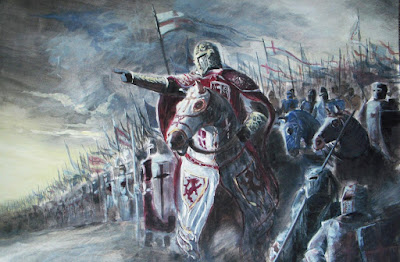 I was very interested in getting a re-match against Simon so when he had a bit of time to play again, I took the opportunity immediately!

This time, however, Simon was to bring his army from the mythical city of Dobrensk. Somewhere in the North, where there is snow and there are plenty of Monsters!

Because of that the people of Dobrensk are hardy folk and had to rely on themselves to protect their families. No wonder then that the nobility is often represented by the regiments of knights while each citizen is well prepared to wield all sorts of nasty weapons to the fight.

Here are the details of the army based on Kingdoms of Men army list at 2000 points:

This army almost looked like a force from King of War Historical! All honest men with their trusty weapons to defend their city! It easily outnumbered my force with no less than 17 elements. It also had 13 scoring units and combined Unit Strength of 19. Which is quite interesting in itself when you compare it what my own army had.

First impression was that I cannot really outdeploy the enemy so I'd rather focus on speed and manoeuvrability more. I also decided that, scenario permitting, I would like to deploy in weighted flank formation. In this way, I should be able to have a local advantage even if attacking from the front. The opposite flank would engage in delaying actions.

The shooting abilities of both armies were interesting because Simon's army had more powerful elements but fewer than in my army. It was thus intriguing who is going to use his respective ranged attacks to better result.

My army has thus 14 elements, 13 scoring units and total Unit Strength of 18. This time I was down on number of units but equal on scoring elements and almost the same on combined Unit Strength. That meant that I probably should avoid exchanges and seek opportunities to eliminate enemy units without giving a chance to strike back.


This time we played scenario Occupy. In the map above, the white tokens represent those worthy 1 point and the orange ones are worthy 2 each. However, as per scenario rules, only the objectives on the opponent's half can be claimed for 2 points. If it is in your own half, you can only contest or defend it.

I decided to follow with the plan and attempted to place the tokens accordingly. I also deployed in a way that limited number of targets to the enemy shooting. Especially in the first turn.

The plan was thus to delay the left and centre for as long as necessary and win on the right flank in order to claim 2 objectives there. In doing so, I should also be in position to deny the 2 point objective to Simon. It that works, I should win 3-2, let's see if that plan worked!


The Knights of Dobrensk led the advance. Slowly at the beginning, not getting into charge range of the faster Elven units just yet. The artillery aimed at the first viable target and Forest Shamblers felt the power of these War Engines.


Elven forces on the right flank moved together in a tight formation, providing mutual support. The shooting was not efficient at all but hopefully it was just this time.

Drakon Riders and the lord on the left moved towards the cover of the nearby forest and awaited enemy forces there.


Both armies engaged now in a sequence of manoeuvres and counter-manoeuvres. On the left, the infantry set up a trap for the Elven flying cavalry. One of the units of Knights also moved in between Elven forces, where there was a gap in their battle line.

On the other hand, the units on the right withdrew, clearly delaying the fight. Perhaps the plan was to inflict more damage with the shooting. It worked as Forest Shamblers were destroyed this time.


Elves were also reluctant to get into a fight and kept looking for an opening. The Palace Guard on the left joined the Drakons while Chariots used the protection of the terrain to continue shooting at the enemy knights.


The battle started to evolve into a clash of two halves. On the left the Elven forces, outnumbered by their enemies, were preparing to attract as much attention as possible and also to slow their opponents down.

That should buy time for their companions on the right where the Knights of Dobrensk kept withdrawing while the shooters aimed at a new target.


Elves attacked on the left flank first. This time Drakon Lord led the charge against the Knights and Palace Guard followed. Drakon Riders parked inside the forest. They were not able to avoid all the enemy units but at least could have some protection.

On the right the advance continued. This time Noble in the Chariot moved ahead of the army to tempt enemy Knights into a charge against him and to draw them into a trap.


Once the Elven forces committed to the fight, they were a perfect target for the counter attack. Pole-arms block rushed to intercept Palace Guard and allowed nearby Knights to fight Drakon Lord one on one. Mounted Scouts attacked Drakon riders but due to hindering effect of the difficult terrain, they managed to inflict just a single wound. However, it was enough to ground them and another knightly unit approached to attack them as well.

At the same time, another unit of Knights attacked the Noble while the Bowmen and Artillery were supposed to inflict some more damage upon their enemies. Unfortunately, their fire was quite inaccurate this time.


Elven units on the left were surrounded almost from all sides and made an attempt to break through. However, only Drakon Riders succeeded, while remaining two units had to brace for impact.

After long manoeuvring, it was finally the time to launch an attack. While Noble in the Chariot and Drakon Lord were to intercept and distract their respective enemies, Chariots, Drakon Riders and Palace Guard were expected to rout their foes. Surprisingly, only Palace Guard fulfilled their mission while Pole-arms Blocks held their ground!


As expected, the Drakon Lord was not able to hold his ground against the Knights and Pole-arms at the same time. Nearby Palace Guard wavered after thunderous charge of the Knights.

The fight on the left also intensified as attacked units counter-charged. However, with the exception of the Elven Noble, all of them were intact. Even the Drakon Riders, stunned for the moment, were about to regain their control thanks to magical potion!


Elven units continued with their attacks on the right. This time it was even more powerful as no less than four enemy units perished. Even though three of them were relatively fragile Pole-arms troops, it was still a considerable loss.

Would the artillery save the day?


The Knights of Dobrensk finished the Palace Guard unit on the left but it looked like they are now way too fat to get back to the fight. It was thus up to the Bowmen and Artillery to inflict some damage and rout a few enemy units. Unfortunately, Bowmen were only able to waver the Drakon Riders while Artillery missed all together.


Elves continued to attack in order to secure the objectives, now controlled by Storm Wind and Palace Guard respectively. But at the same time they kept attacking to be ready for a longer fight if necessary.

Forest Warden attacked one of the War Engines and destroyed it while the Drakon Riders finished lone Bowmen.


Knights of Dobrensk spurred their horses for the last, glorious charge and routed one regiment of Elven Drakon Riders. Mounted Scouts attempted to stop the Chariots but were not successful.

Elves have never underestimated the prowess of their enemies and their warrior code demanded to show the respect by continuing the fight as long as their adversaries kept coming back for more.

The final charges claimed two more enemy units and the wizard was also captured. The Knights stood their ground despite significant loses.

In the end, Elves achieved the tactical victory and remaining Knights of Dobrensk withdrew from the battle field.

Many thanks to Simon for another great game! At the same time, I am really sorry for some bad luck with dice. It is always frustrating when even the best plans are badly affected by the unlucky rolls.

The artillery started very well but then kept missing the targets. The pole-arms were not able to finish Drakon Riders even with the flank charge and one of the Knightly units was routed by a Drakon Lord alone. :(

I always prefer when the dice behave and rolls are average. It is, however, always a reminder to try and be prepared for such occasions, as much as one can.

It seems that in general my plan worked. The units on the left tied a few of the enemy for long enough to stop them from contributing to the fight on the other side. The assault on the right proved to be successful as well. In fact, I achieved the goals of the scenario with fewer casualties than I expected.

We had a discussion with Simon about what he could have done differently and I was wondering if being more aggressive in the advance, even moving some units forward as bait, would have not been a good option? Perhaps we will find out next time!

Even in victory, there are always things to do better. For example, I am not sure if it was really needed to Vanguard the Shamblers. Even if I had first turn, I would not be able to clear the forest with other units anyway. Perhaps it would have been beneficial to keep them all hidden completely.

I also risked with Storm Wind when they were attacked by the General as they could have been wavered at least and that would have been quite a problem. I could lose the unit or have enemy flier behind my back.

All in all, however, I was happy with the game flow and the end result. I am glad I haven't made any glaring mistakes this time!

Thanks for reading!
Posted by Swordmaster at 20:20