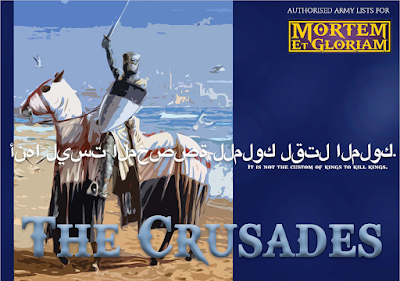 As you have probably noticed by now, Stephen is one of my regular opponents at the moment. We were also both preparing for a tournament in the frame of WinterCon 2019 event. Stephen, inspired by the most recent performance of Cretan Archers, decided to bring any army with his own Skilled shooters - Mamluk Egypitan.

I have never played against such a force. Although I played against armies with horse archers, the Mamluks are different. First, I was about to deal with TuG's of Skilled, bow armed cavalry. It means that Stephen did not have to worry about low break point for the army. And still be able to evade slow blocks of pike armed infantry. Second, Mamluk cavalry can fight too. Especially Superior Royal Mamluks that are Melee Experts armed with Short Spears.

Here are the details of almost all mounted force I was about to fight against: 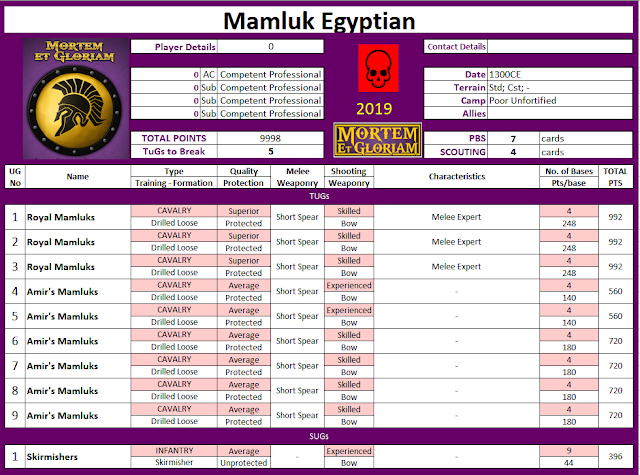 My initial plan was to advance with the infantry as quick as possible, with one flank protected by the terrain if possible. Cavalry would guard the opposite flank. Although I expected inevitable casualties, I thought that the enemy would not be able to evade forever and that I could make up for the losses in melee.

After pre-battle phase we had a secure flank in the mountains and I was a defender. It meant my camp was fortified, which was helpful against all mounted army. I could manoeuvre knowing it cannot be taken by cavalry.

There was a piece of uneven ground in the middle of the battle field too, which was great for Mamluks because it is considered to be rough terrain for units in Close formation. Which included my Phalangites but the Loose cavalry was not affected.

I deployed one group of Phalangites and Cretan Archers across the Amir's Mamluks, hoping the archers can do some damage at the distance. Second group of Phalangites was to follow through narrow passage. Although I needed to remember it is only for my infantry, while Mamluk cavalry had more freedom in manoeuvring.

The Mamluks seized the initiative and advanced towards their enemies. The Royal Mamluks begun their enveloping manoeuvre, while the units on the opposite flank positioned to shoot at the advancing Seleucids. The first target, enemy skirmishers.

Seleucids responded with advancing on their left flank and sending one of the Phalangite units to stop the Royal Mamluks.

Both armies tried hard to achieve more advantageous positions than their adversaries. Maluks sent in their reserves through the uneven ground, using it to threaten the flank of one of the Phalagite units. That forced Seleucids to advance with the Companion Cavalry to intercept any charges.

At the same time the Mamluks evaded Phalangites on the left flank and focused on the enemy skirmishers.

Seleucid skirmishers, in their attempt to exchange the fire with their enemies, created a dangerous situation. Mamluk commanders spotted an opportunity to create chaos among enemy ranks and sent in one of their units to attack. It resulted in catching Tarentine Cavalry, while Cretans and Horse Archers had to run away through their own units. More confusion followed and Mamluks made a breach in Seleucid lines.

At the same time, the attempts of Seleucid units to catch their enemies and force them to fight failed.

Seleucids made another attempt to catch their enemies but it failed as the infantry was simply way too slow to catch their mounted foes. One of the Charging Lancers unit clashed with the Mamluks but this fight was not yet conclusive.

To make things worse, Royal Mamluks continued their deadly shooting and this time the casualties were so heavy that the first of the Phalangite units broke.

Only the night saved the Seleucids from complete disaster and they withdrew from the battle field.

Many thanks to Steve for a great game! Although I was totally out-manoeuvred and we didn't finish it, I think I learned a lot.

Mamluk force is very dangerous indeed. Combination of drilled units, professional generals and deadly shooting abilities means that it is very difficult to force this army to fight on your own terms.

To make matters worse, I made mistakes with my own skirmishers. I created a situation where they had to run away through my own units. Instead of using them to slow down the enemy or even inflict some damage at the distance too, I ended up with a gap in the formation and units scattered and not supporting each other.

The quality of shooting of the Mamluks is high and I quickly discovered that. I am not sure how to address that issue at the moment. If I were to send my own cavalry they could have been shot to pieces even quicker than my infantry.

However, I need to come up with a different plan for sure. Perhaps aiming at minimising the casualties in the games against similar foes should be the main goal?

I hope that despite unfinished game, you found it interesting and entertaining.

Thanks for reading!
Posted by Swordmaster at 17:43