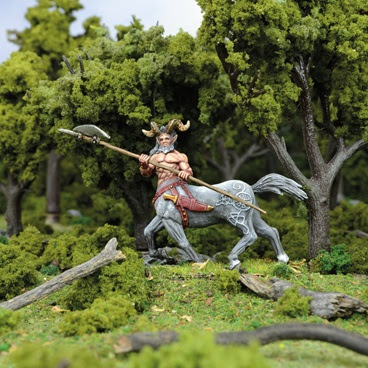 I had a great opportunity to play against a new opponent with a completely new type of an army to what I have been playing against recently.

I played against The Herd commanded by Yan. Yan contacted me some time ago as he was looking for opponents to play on Universal Battle. We finally found the time suitable for both of us and I was really looking forward to this game.

If I remember correctly, I have played against the Herd only once so far. I was very curious what type of an army Yan is going to bring to the field. I must admit that due to my inexperience in fighting against this faction I didn't even know what to expect! Maybe apart from Stampede :)

Here are the details of the army at 2000 points I was about to play against:

Let's start the army analysis with the usual count of units, scoring elements and combined unit strength. This force has 12 elements, 9 of which are scoring. The combined unit strength for this army is 16.
I find the combination of Thunderous Charge, in particular with infantry units, and Pathfinder very intriguing. Some of the units have Crushing Strength as well and two Shamen with Bane Chant can further add to the efficiency of these attacks. It is definitely quite intimidating and I would expect that many Herd units would inflict a significant damage on the charge. It would be important to try and intercept them to limit the efficiency of their attacks.

The army is not slow either, with the slowest units moving at Speed 6. Faster than usual Stampede, Lycans and Chimera hit hard and are fast as well, so stopping these units would be a challenge.

I noticed, however, that the army is not heavily armored and even with additional penalty for cover (I assumed that with Pathfinder this force will want to use the terrain to maximum advantage) there should be some damage done. Yan knew this so he brought 2 Shamen with some healing abilities to help and mitigate the potential disadvantage. Regeneration on Lycans would also help for sure. But focusing fire on a single target may still inflict sufficient amount of damage.

Prior to the scenario choosing I decided I had to be patient and use my shooting to try and soften up the enemy. It is a usual approach but sometimes it was not efficient due to good healing/regenerative abilities of the enemy units. In this case I thought I may still have a good chance to gain a bit of an advantage. The plan would still need to be refined as soon as I learned about the scenario.

My army was changed a bit since last game and here are the details:

In comparison to the army I used last time I added Army Standard for one more inspiring presence, because I really missed that. Especially when Drakon Lords tend to fly ahead of the army.

Dwarven Ale and Staying Stone were given to the Drakon Riders to mitigate the effect of Waver that often had a devastating effect in my previous games.

Last but not least I further added a bit more shooting in the form of second Noble, Diadem and Alechmist Curse.

We rolled Ransack for this scenario and we used map 8 from Epic Dwarf fantastic website. Once again the tokens ended up on some kind of a circle. This time I deployed majority of my army in the center in order to be able to fight for the most lucrative objective in the middle.

It also allowed me to use the slower infantry to move to help to either flank and not get in a way of faster troops there. As the objectives were relatively evenly pressed, it looked like we may control the 3 each without much of the maneuvering.

However, Yan split his forces and deployed stronger on both flanks. I thus had to face numerically superior groups. My intention was to use the shooting as planned and then try to choose the fights I could potentially win fast. That would probably be possible on the right flank where I had speed advantage.

It was much more difficult on the left where I had to deal with fast and hard hitting Lycans, Chimera and Stampede. This is where I would have preferred to focus my shooting on. Hence the presence of the Drakon Lord with Diadem and Warden with Curse there. If I could succeed with shooting, i.e eliminate at least one enemy unit, that would further increase my advantage in terms of unit strength. And such a gap would also allow to engineer multiple charges better.

Yan won the roll off and elected to move first.

The Herd army advanced but surprisingly, quite cautiously. On the right the units were still staying in the forest while on the left only Lycans and Chimera moved forward, using the ruins of the nearby building as a cover. The Stampede moved back to avoid being shot at.

Elves advanced but mainly to get their units into a shooting range. They aimed at the most suitable target, group of Longhorns in the open. The damage was substantial but the warriors were not easily discouraged.

The Herd groups became more restless and that showed on the left flank. This time everyone moved forward, with Harpies providing cover and spearheading the attack.

On the contrary, the infantry units on the right switched to defense and moved back instead.

Attack is often the best form defense and Elves used that approach. Drakon Riders and Forest Shamblers teamed up to rout the Harpies. That allowed the Drakons to reform and avoid the attention of enemy troops for a while.

At the same time other units maneuvered to get into positions for the shooting. This time Lycans were the target. Combined efforts of Drakon Lord, Chariots, Nobles and Silver Breeze resulted in a sufficient amount of damage to temporarily confuse and distract Lycans.

The rest of the units kept maneuvering to get into good attacking positions with second Drakon Lord challenging Chieftain to single combat. That had additional effect of allowing Storm Wind and Drakon Riders to approach slower enemy infantry without a risk of being intercepted.

The Herd forces on the left flank counter attacked. Stampede run through the Shamblers with easy while Harpies intercepted Drakon Lord. He had to now focus on aerial combat instead of attacking other elements of the enemy army.

(Edit: I made a mistake on the diagram, the Lycans regenerated some of the damage instead of being healed.)

Elves committed more and more units into the fight. On the left, Drakon Riders and Forest Warden charged Stampede to hold it in place for a while. At the same time the rest of the nearby troops maneuvered to shoot at the Lycans again and wavering them one more time!

On the right the thunderous charge by Storm Wind caught one group of the Longhorns in the open and routed them completely. Drakon Riders and Lord both attacked their respective opponents, mainly to guard heavy cavalry from being flanked.

The Herd kept fighting back. Stampede still had enough power to overwhelm the Drakon Riders. The same fate awaited second unit of the Elven flying cavalry on the right flank.

Elven units spotted an opportunity to win the fight on the left flank. Forest Warden and War Chariots attacked Stampede again and this time stopped it in its tracks. The Drakon Lord finally got rid of the annoying harpies while third round of shooting was too much for the Lycans. Only Shaman and lone Chimera were left to fight and while still dangerous, they were outnumbered and most likely unable to stop the Elves there.

On the other hand, the attack of Storm Wind cavalry against Spirit Walkers failed completely. Not a single Herd warrior perished and they were getting ready to fight back!

Despite the losses the Herd forces were not thinking about giving up. Quite the contrary, they attacked again. Chimera claimed the victory over War Chariots while Elven Knights were also routed by the vengeful Herd warriors.

Some of the Elven units kept fighting. Drakon Lord on the left finished off the Stampede while Palace Guard attracted the attention of the Chimera.

At the same time, second unit of elite Elven infantry, together with Drakon Lord attacked Longhorns. However, despite significant damage done to the unit, Herd warriors refused to yield against all odds!

The few surviving elements of the Herd army made final attempt to do some damage against their enemies. Chimera was not successful, alone against fresh Elven unit. But Spirit Walkers captured one of the Drakon Lords!

Elves continued their attacks against damaged enemies but only Chimera perished as a result of a combined charge by Drakon Lord and Palace Guard. Second unit of Palace Guard did not manage to inflict sufficient amount of damage on Longhorns to rout them as well.

However, the Herd forces were in no position to claim more objectives. They conceded defeat and withdrew the survivors to the depths of the forests.

Many thanks to Yan for a great game! It was absolute pleasure and I am looking forward to more games in the future. Hopefully with real models some day too! :)

I was very happy to win a game, also because I was not doing so well in my previous battles. The plan seemed to work well, as the amount of shooting I had was enough to waver and eventually rout Lycans. Very important effect to slow down the advance on the left flank and definitely contributed to the end result.

It felt good to have many scoring units where I could keep some of them in melee while others maneuvered to get closer to the objectives. It further helped that the units such as Silver Breeze or Chariot Nobles could still contribute with shooting while doing so.

My other two heroes with shooting abilities seemed not to add much in that department. Warden was in melee at the start and then aimed at lightly armored Shaman. Drakon Lord shot only once but that contributed to the amount of damage and wavering effect. However, despite that it was good to have such flexibility and it is just a matter of learning how to use it more efficiently.

I would like to thank Jeff for his advise, especially after our previous game. Thanks to his suggestions I made a few small changes that allowed me to stay true to the principles of MSU army but equip the it better for the battles.

Thanks for reading!
Posted by Swordmaster at 13:00