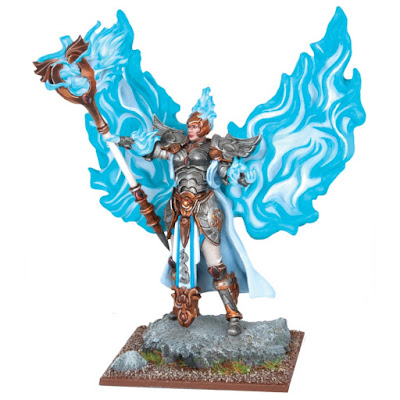 With CanCon 2019 over I looked at new opportunities to play more games of Kings of War. In particular because I did not participate in Australian Clash of Kings but played some historical games this time instead (please check my reports from Mortem et Gloriam games!).

However, I was very curious what type of armies people brought to the event this time and I wished I could have taken part in two events at the same time!

Hence I talked to some players who participated in the tournament and Jeff was obviously one of them. Surprisingly, he decided to try a completely new army than the one he took to Clash of Kings 2019. The reason was that although he won all his games, he finished 2nd overall. It was because with his Forces of Nature army he often won on scenarios but was not able to rout significant amount of enemy units.

His new idea was about Forces of Basilea army. For this game we decided to play at 2000 points, simply because we were not yet sure what would be the most popular size for the new season.

This army has so many sources of Inspiring Presence! I must say I am most envious of the Elohi regiments because they cannot be wavered and still inspire. They are perfect for the usual tasks I delegate Drakon Riders for.

Penitent Mobs are quite interesting too. They are cheap, despite 3+ defense they are not that easy to get rid of, especially considering the healing abilities of the army combined with inspiring presence. Headstrong makes them very reliable and while they hit only on 5+ in melee, the sheer number of Crushing Strength (1) attacks should inflict damage anyway.

Two phoenixes and three wizards provide some nice ranged attacks. While middle ranged, these models are very mobile and can get to the right spot quickly. In addition, phoenixes are very versatile in their support to the army and despite low defense, they may not be easy to rout. Good nerve, regeneration and self-inspiring should see to that.

Last but not least two Ur-Elohi are more than a match for Drakon Rider Lords and can either assist the troops or go for hunting on their own.

In summary, this army had 13 elements, 10 scoring and combined units strength 18. I considered it a good combined arms force that had tools to participate in each phase of the game.

I took the following version of my army:


In comparison, I had 13 elements as well but all of them were scoring and combined unit strength was 18. I probably could consider my army a bit faster but with significantly less shooting than I was used to. The initial plan was to use the speed to send a few units against a single target and try to make some breaches in what I expected to be a wide battle line. I had to divide the opposing army before the hordes of infantry would catch up with my force and win the war of attrition.

We played Plunder this time. It is very similar to Loot but there are more tokens and some of them are worth 2 points. These are marked as white on the diagram. While orange are worth 1 point.

My plan was to use Vanguard on the left to claim first token. And use the forces on the left flank to dominate that part of the battle field as I thought I may have an advantage in numbers. Two regiments of Storm Wind were on both sides of the forest to either attack together or slow down the enemy on the right flank.

Elves advanced in a steady formation. Only Forest Shamblers were sent in vanguard mission and managed to snatch the first token. The rest of the nearby units were ready to support them in the case of any reckless attack by the Forces of Basilea.

Forces of Basilea advanced in two seemingly separate groups. The one on the left flank was more cautious, using the terrain as potential cover from shooting or to prevent the attack from the powerful Elven knights.

The one on the right advanced a bit further since there were fewer Elven regiments opposing them.

Elves decided on more aggressive maneuvers since their shooting was not doing significant damage. On the left the Drako Lord landed on the flank of the enemy formation, tempting Elohi to charge him and hopefully be exposed to a counter attack.

The remaining regiments in the area advanced too, with the cavalry using the proximity of the hill to cover their advance.

On the right Elves withdraw a bit to buy more time but the Drakons decided to land behind the enemy lines.

Forces of Basilea mounted their own attacks against outflanking Elven units. On the left Elohi managed to waver the Lord and nearby War-Wizard was able to protect them too. While galloping forward, he managed to cast a few firebolts that wavered Forest Warden too!

His companion, together with the Phoenix, also sent fiery missiles against the knights and wavered them too!

Last but not least, the units on the right sprung the trap and immobilized the Drakons with short ranged attacks.

Unfortunate turn of events effectively stopped Elven advance and ruined the plan to obtain a local advantage on the left flank. Elves tried to attack anyway but the charge of the Palace Guard against the lone wizard failed.

Noble in the Chariot sacrificed himself to give time for the Knights to recover while the second regiment advanced to the rescue.

Forces of Basilea pressed their attack and quickly gained significant advantage. Elves lost four elements in one go. The loss of the flanking forces was in particular problematic. However, the fact that Ur-Elohi still managed to attack Storm Wind cavalry did not help either.

Elves had no choice but to attack. Forces on the left flank inflicted damage upon enemy infantry but could not rout it. Drakon Riders also failed to do any significant damage against Elohi. That complicated the bad situation further as Elves needed to win that flank fast in order to regroup and help in the center.

Storm Wind cavalry on the right charged the infantry alone but even though they did better than Forest Shamblers and Palace Guard combined, the attack was stopped.

Basileans used the opportunity to deliver a Killing Blow. This time Elves lost four more units and the ability to fight back. Entire right flank force ceased to exist and Basileans were free to collect the spoils of war already.

While the smaller group on the left proved to be very stubborn and kept on either wavering or even routing entire regiments of Elven warriors.

Elves finally achieved their objective to win the left flank. However, it was way too late and with too many units lost in the process. Forces of Basilea were dominating the field anyway.

With very few units left, Elves were already cornered. Next victim was a regiment of the Chariots that was routed by the combined attack of Basilean forces.

Seeing that all is lost, remaining Elven forces conceded defeat and withdrew from the battle field.

Many thanks to Jeff for another game! It was a harsh lesson again and boy, it does feel bad when you concede the game. But I always make an effort to come back to such defeats and try and learn from them.

I think the main contributing factors are:

1. I did not use the speed advantage as planned. I either did not properly take into account the terrain as when I could not charge infantry PM2 with my cavalry and chariots because of the hill. (Jeff used it very well to his advantage!) Or when I didn't position units properly. As when two cavalry units were not able to attack a single target.

2. I made mistakes on both flanks with flying units. I did not anticipate that War-Wizard would block the flank attack on Elohi. I probably should have sent Drakon Riders against him anyway as they did not suffer the penalty for being hindered. And would hit harder too. While on the right flank I fell into a nice trap. I sent Drakons without support where I should have anticipated the fact they can be easily shot at. Even if they survived that turn, next shooting phase would have killed them anyway.

After that things escalated very quickly. The wavering effects were painful but even without these my units were in bad spots anyway. And I could not get them out of trouble at all.

I hope that you do not make similar mistakes in your games! It was always better to learn from somebody's else errors :)

Posted by Swordmaster at 22:41