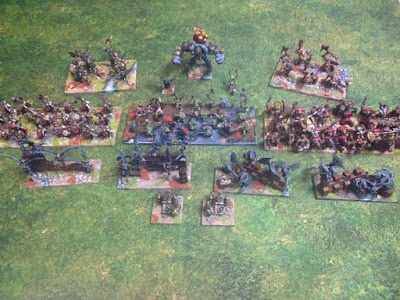 In the round 2 of Australian Masters 2017 I had a great pleasure to play against Andrew and his Abyssal Dwarfs.

Andrew came a very long way from Melbourne to participate in the tournament and it was the very first time I had a chance to play against him.

He commanded one of the two Abbysal Dwarfs army with a strong theme of slave warriors force. There were very few Abyssal Dwarf in fact, as the arm's main body count came from three hordes of Slave Orcs!


Those two Heavy Mortars were dangerous and the army as a whole looked very intimidating. I tried to look for some weak spots to exploit and I noticed that the army does not have that much inspiring presence due to only 2 heroes.

Because of that I wanted to try and spread the shooting aiming at Gargoyles as even a single point of damage could result in wavering or routing the unit. In particular, if they were not close to Ba'su'su. I also wanted to get to those nasty mortars as soon as possible and expected them to be at the very edge of the deployment zone. The job for the Drakon Lord then.

I did not have more time for further deliberations as we started deploying the armies.

We played Scavenge which was a new scenario for me (funny how sometimes one still finds scenarios that were not played before!). Again, with not much time to consider I decided to treat it a bit like Loot so that I could have had at least a reference point.

The markers were placed on both sides of the middle one but still relatively close to the center. I knew I cannot fight the enemy head on as the hordes had better chance of winning the war of attrition. However, Andrew deployed in a way that allowed him to spread his army and cover all venues to his mortars.

I decided to try weighted flank deployment with single unit of Drakon riders on the right to sneak around and avoid being shot at by the mortars. The center was to shoot ar Gargoyles and slow down the advance of the enemy. The left had more units and I hoped to be able to win that flank as I had small advantage in numbers.

I tried to hide some elements behind the terrain, which was not ideal as it also meant they could not see advancing enemy.

Andrew won the roll off and chose to take first turn.

Abyssal Dwarfs army moved slowly but with a purpose forward. As usual, the thundering sound of the heavy mortar salvo was accompanied by laud war cries of the Slave Orcs. The shells hit Drakon Riders and inflicted some serious damage already.

Elves moved forward a bit, tempting the enemy units on the left with early charges. Drakon Lord on the left and Drakon Riders on the right moved along the flanks to try and land behind the lines and get a chance to eliminate the mortars soon.

In the meantime, the Silver Breeze cavalry tried to rout Gargoyles but they were well covered and the damage that was done was not yet enough to shake them.

Abbysal Grotesques on the Elven left flank took the bait and attacked the chariots. Despite hindered charge they managed to waver their foe. At the same time, Gargoyles covered the attack and blocked the other Elven units.

The rest of the army kept advancing while Ba'su'su intercepted Drakon Riders on the right flank.

The trap to catch the Abyssal Grotesques did not work and Elves had to first fight off some annoying Gargoyles to open the way for their units.Drakon Riders behind the Chariots could not assist either and did not move to avoid the risk of being shot at. Drakon Lord, however, moved to the opening left by the enemy infantry and landed as close to the mortar as possible.

In the meantime, the units in the center also charged in but they did not inflict sufficient damage to break enemy formation.

(Edit: This is the turn where I completely forgot to even move the Drakon Riders on the right!)

Abyssal Dwarfs army attacked over entire front and inflicted a huge damage upon Elven units. First, Abyssal Grotesques finished the chariots. Then, Slave Orcs in the center routed small unit of Palace Guard while Obsidian Golem made a short work of the Elven knights. Ba'su'su got rid of "his" Drakon Riders and even lowly Gargoyles intercepted and grounded Elven Darkon Lord!

After such a powerful blow the only direction of the attack with any chances for success was on the left flank. Elves used their maneuverability to surround Abyssal Grotesques with no less but four of their own units! It was to minimize the negative effect of the terrain. Unfortunately, despite substantial damage, the enemy unit held its ground. (Edit: I believe I needed something like 5+ to rout the unit but did not even waver them.)

As the attack on the left flank failed, it was now time to pay the price. Drakon Riders fell to Abyssal Grotesques while Storm Wind cavalry and damaged Palace Guard regiment were routed by Slave Orcs. Even Drakon Lord got wavered by the Gargoyles!

With very few units left it was now a matter of simple survival. Would Elves be able to safe any of their units? Silver Breeze cavalry kept shooting at their enemies but somehow arrows flew wide and off target.

(Edit: This time I forgot to roll attacks for Palace Guard against Grotesques :( )

Abyssal Dwarfs army kept pushing forward to make sure no one escapes. Palace Guard was easily defeated by the Grotesques while one of the Silver Breeze troops got hit by the heavy mortar shell and ceased to exist.
Outcasts - Turn 5

Elves lost all their hope and shot their arrows for the last time. Slave Orcs have had enough of the bow fire and fled.

Elven units had nowhere to run and Abyssal Dwarfs finished the last pockets of resistance. The Elven army was utterly and completely destroyed.

Congratulations to Andrew for a well deserved and complete victory! It was great to play against him and I just wish this battle was not one sided and that I had been a more demanding opponent.

Andrew deployed his army very well, covering entire width of the battle field. At the same time his use of Gargoyles was superb and I was really impressed how versatile they can be. They are far more than cheap and fast expendable units. In this game they did great as interceptors and allowed the Mortars to keep firing in each turn.

He also perfectly exploited any mistakes and openings I made. And boy, I made tons of them!

When I looked at our game again, during making the diagrams I came to the conclusion that my plan was not good and that I deployed poorly. I think I fell into the trap of being intimidated by the mortars. While trying to block line of sight is in general good idea, I did it at a cost of my own maneuverability and I was too passive with my own units.

If I were to play this game again I would need to accept that there are going to be casualties and deploy with that in mind. It means that I should have placed the units in a way that would allow them to engage the enemy or threaten the advancing units from turn 1.

While the idea to shoot at Gargoyles to remove the most maneuverable threats is in general a good plan, in this game I didn't use the chance to actually inflict damage upon advancing Orcs. With defense 4+  they are more likely to get hurt than their free cousins. I should have used my bow fire to at least damage advancing unit in order to be able to break them with my faster units.

The attempt to use terrain on the left was a good idea in itself but the trap should have been set with different bait. Or I should have simply positioned Palace Guard there as they are still quite reliable in the terrain.

Unlike Andrew, who coordinated the movement of his units very well, always providing mutual support, I failed here too. The fact that I forgot to move Drakon riders, to rout grotesques or to roll dice for Palace Guard troops, were more like consequences of bad moves and decisions before. After jumping the gun in turn 2 where I attacked middle Slave Orcs with only 2 units of my own, was in my opinion the moment where the course of battle changed from bad to catastrophic.

No wonder I lost my entire army soon after and the game, from my point of view, was only about survival and trying to save any unit.

Posted by Swordmaster at 22:49