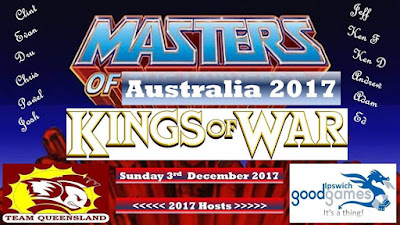 Part 10 is the last one of the series dedicated to Australian Masters 2017 and I would like to conclude with a collection of summaries, observations and simply share some general experiences.

It was great to be able to qualify and participate in that unique event. Many thanks to KenF for organizing the event, Good Games Ipswich for hosting us and for the great gifts and to all people who were one way or another involved in making this tournament happen!

I feel privileged and honored that I made it thus far and I hope that Australian Masters will get more and more popular in the future!

I would like to start with the results of course! After all, we all competed to be the best of the best and I think it is a good idea to begin with a bit of a presentation of each players achievements. 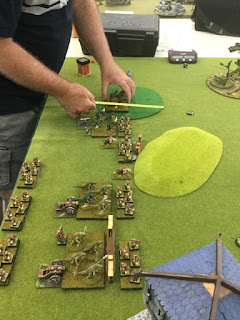 Jeff was defending his title from the Masters last year and he succeeded! Well done indeed and congratulations once again for a fantastic achievement!

Jeff  defeated all his opponents with clear 4/0/0 score:

Looks like there were quite a few Dwarfs vs Dwarfs fights there! 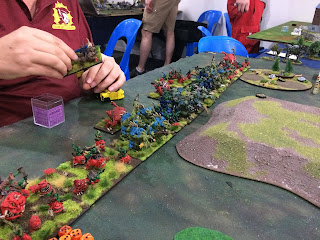 I am sure many would bet on Clint to win the event and rightly so, after all he is the first ranked player at the moment. He fought hard during the event and ended it with 3 victories and 1 defeat:

Dru proudly represented ACT and thanks to his efforts the podium had a player from three different places! He also ended up with 3 victories and what made a difference between 2nd and 3rd place was attrition! 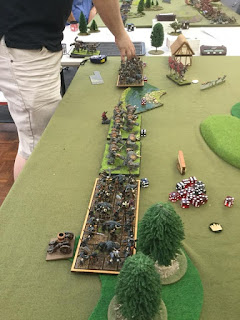 Evan started strong by winning his first two games but two close defeats in the game 3 and 4 meant he just missed the podium!

There were three factions that were represented by two armies and out of them all Abyssal Dwarfs did the best. It is also thanks to a very good performance of Andrew who like Evan had 2 victories and 2 defeats during the event:

Chris was the only player who employed allies in his army and the second best from Queensland after Clint. Chris  also finished with 2 victories and 2 defeats result: 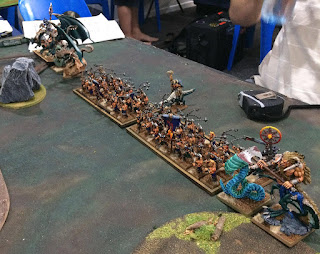 Ken had a huge responsibility on his shoulders as he was a playing TO and had to quickly put results of each turn and then make sure everything run smoothly during the rounds. Fortunately, there were no problems that required his immediate attention but nonetheless, many thanks for preparing the event and running it!

Ken had 2 victories and 2 defeats during the tournament:

Josh had a tough start to play against Jeff in round one and he also lost his second game. However, he enthusiastically kept fighting back and finished strong with 2 victories! 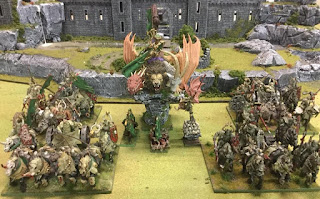 Ken brought the army that made him famous and during the event he also had to compete in the "best Ken" competition. This time KenF got better but I am sure this sport rivalry will continue!

Ken had 2 ties and 2 defeats in the event: 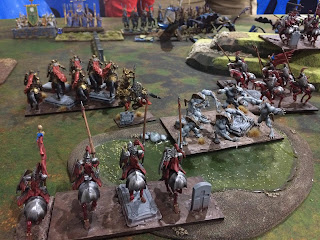 10. Adam - Undead
Adam had another all mounted army to play with and he finished the day with 1 victory, 1 tie and 2 defeats: 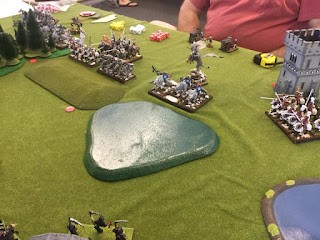 11. Ed - League of Rhordia
Ed also played heavily mounted army but unlike Ken or Adam he also added some artillery support. Ed finished the tournament with 1 victory and 3 defeats:

And the last player was yours truly! After 4 games I had 3 defeats and 1 tie and was the only player without even a single victory!

If you want to check the exact result of each round and/or particular battle, you may follow the link to the tournament software we used for keeping track of the scores:

And below is the table with final standings:

I would like to thank Good Games Ipswich for providing excellent conditions to play the games! I believe the terrain was also supplied by some of the players too so thanks for that as well! It was definitely great to play in cozy conditions, with enough space around the tables and with AC on :)

We used maps designed by EpicDwarf although as you can see on the pictures the dimensions of the particular pieces of the terrain may have varied.

In general, the player's pack was pretty straightforward and players took it on board quickly. I think the only question raised was a clarification for terrain and that was also smoothly sorted out.

The only aspect I would like to focus on is the scoring system which was assymmetric. It means that the final score was altered differently, depending if the winning player (i.e. the one who won on scenario conditions) had a positive or negative attrition difference in comparison to his opponent.

I would like to illustrate it with an example:

Player A scores 501 more points on attrition in each game than his opponents. However, in 3 games he loses on scenario and in 1 wins on scenario. It means that due to the scoring system his 3 losses end in 9:11 result and his only victory translates to 17:3 result. In total, he earns 44 points.

Player B scores 501 less points on attrition in each game than his opponents. He also wins all of them on scenario. Due to modifications his result from each game is 11:9 and in four games he earns 44 points total, exactly the same as player A.

However, Player A will have a significantly better score on attrition points and will end up higher in the overall standings than Player B.

I don't think that the system that allows a player who actually loses 3 games and wins only 1 to place higher than the player who won all 4 is a good one.

I believe that next year it would be better to come up with a different system, possibly use whatever is officially suggest in the CoK 2018 supplement that is going to be released at the beginning of the 2018.

In general, I think the event was great and the only thing I would like to see improved in the future is the publicity and coverage aspect of the tournament. A lot of players who did not qualify hoped for some news and photos from the games on the day. However, while normally I have just enough time to post a deployment picture on tweeter, this time I had none! I would not expect players to take and post pictures on social media during the event anyway.

However, I wonder if for the future events we could not ask one of the local players (wherever the Masters are going to be organized next) to simply cruise around the tables and discretely take some photos. And post them either in a dedicated forum topic or tweet them with a dedicated hashtag etc.

I think it would have been fantastic to do it and would advertise the event to more players too. I hope that one day the Masters would be the event that crowns the season and that players aspire to qualify to as soon as the new season begins. That they would talk about it all year, either in the context of the games played or about the armies that are being represented in the upcoming edition.

I am sure such publicity would also help growing the hobby further and attracting more people to the system. After all, a lot of us likes watching sports on TV even if many of us are not professional athletes. :)

Before I continue to personal gaming experiences I would like to thank my opponents: KenF, Andrew, KenD and Adam for fantastic games! All of them were played in great spirit and all my opponents expressed great sportsmanship. It is amazing because it is not easy to control emotions when so much is at stake and that every single mistake may be crucial.

I would also like to thank my sparring partners: Ed, Eastern Barbarian and Michael aka Darth Sabre, who found time to help me with preparation to the event. I greatly appreciate your efforts and I am really sorry I didn't perform well to honor you properly.

I will not deny that getting a Wooden Spoon award for the first time and during such a prestigious event was tough. I was very happy to qualify and wanted to represent Elves and local group of fantastic players from Canberra as best as I could. Unfortunately, I did not win a single game.

I did expect that game wise, every single mistake will be exploited by the opponents and it was harsh but valuable lesson. I really appreciate that my opponents were very understanding too and I apologize if sometimes I may not have the most happy face.

However, when I looked back at the games I played I clearly identified many mistakes I made. And that gives me hope for the future as there is plenty for me to learn. I actually knew that before the games, I just hoped I would be more demanding opponent.

I also think that the amount of mistakes I made was a bit higher and I wonder why was that so. During the games I didn't feel any pressure but maybe that was just my conscious mind, hard to say what goes in the background! I definitely think that if I were to improve and play better with significantly less mistakes I would have had a chance to win my games. Always blame the general, never the army :)

That is why I don't quite intend to change my army list at the moment. It was never my way, the fact I managed to qualify is due to that approach. I learned from previous games and practiced with the similar army. It does not mean there will be no changes at all. I am already looking forward to reading new updates in the CoK 2018 supplement. But I would like to continue playing with more or less the same army as I would be able to progress with the painting and modelling and hopefully discover new ways of playing and winning the games.

The new season is on so I better plan how to attend future tournaments so that I can qualify for Australian Masters again!

Many thanks for reading the blog posts about Australian Masters 2017! I really enjoyed writing about the event and my involvement in it. I had great games and I hope you enjoyed reading about them.

If you have any feedback about any of the posts, please, let me know! I would love to take your suggestions on board and make sure the future posts are even better.

Thanks for reading!
Posted by Swordmaster at 21:25