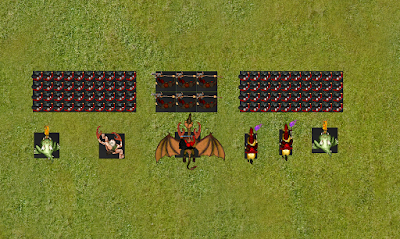 After the 12 players who qualified for Masters got and confirmed the invitations, it was time for preparation. My most recent tournament was at 1200 points so I needed to get back to playing at 2000 points again. In addition, by the time I managed to organize a game, all the army lists were published so I wanted to use that for the preparation too.

Luckily for me, my Universal Battle sparring partner and UK Master player, Edzig, was happy to help me with the preparations. We quickly discussed the options and he also kindly agreed to play with my own army against Varangur force that I was to use in the first round.

I must say I was very intrigued because I have never played with a different army in KoW and that in itself sounds like a very interesting experience. In addition, I would see my own army lined up against me and I was curious how Ed would play with it.

Here is the army list I was about to use as a reminder:


This army seems to embrace a completely opposite approach to my MSU Elves. Tough and quite expensive (in comparison at least) elements that can take a lot of enemy units head on and grind through them or destroy them on the charge. However, they are a bit slower and need to kill two enemy units per each one of their own quickly in order to even the difference.

I had an opportunity to play against a similar army Ken used against me during the first round of Clash of Kings 2017 too. He defeated me back then so I thought I may try to use similar approach and see if I could repeat his success.

Despite the fact that this time I knew the enemy better than myself, there are still a lot of factors one needs to take into account. That makes the learning process a bit more challenging but I was happy that I have that opportunity. And one of the factors that contributes a lot is, of course, the scenario.

Here is the Elven army list for reminder as well:


We rolled Scourge scenario and ended up with 7 tokens. The 7th one on the deployment map is under the unit of Fallen in the top left corner. My aim in general was to have the tokens in front of the advancing army. However, Ed placed a few in the corners.

I decided I will advance with the infantry towards the center where they can claim two tokens. I wanted to keep the Fallen as the reserve, burn the token in turn 3 and the unleash them to press against the enemy so that I could claim remaining two tokens in the bottom of the battle field.

I needed to keep the tight formation and not allow too many flank charges. However, with Lightning Bolts and breath attacks I thought I may enter short range shooting duel. If I could avoid the outflanking and corner the units in the bottom left corner I thought I should be able to win the war of attrition and at the same time prevent Elves from controlling enough tokens to win on scenario.

Ed won the roll off and he elected to take first turn.

Elves moved their shooters into range but the combination of various factors greatly affected the accuracy and the arrows failed to penetrate any armor or thick skin of the targets. Only the Drakon Riders on the right moved at full speed to use the space for the usual outflanking maneuver.

Varangur army moved at the marching speed with the units maintaining close proximity with each other. Only those in the center adjusted the facing to keep an eye on the Drakon Riders.

Elves were not yet ready to advance on their left but the Drakons on the right kept circling in hope they will find the soft spot and the opening in Varangur formation. The shooting was still inefficient.

One unit of Bloodsworns kept keeping the Drakons in their front arc but it had to come to exposing the flank to another unit. However, they took the risk as the King and Devourers were already moving to assist if needed. Fortunately, the wizards managed to inflict significant amount of damage against Elven chariots and wavered the enemy unit.

Elves tried to pull back damaged units and move some of the units in the center away from danger. At the same time Drakon Riders were further enveloping the enemy formation from both flanks.

Varangur units tried to cover all angles but in doing so started opening the formation. Devourers finished off damaged chariots but the wizards tried to cast spells at the Drakon Riders. The chance to impress them was slim and the elven flying cavalry was not about to attack.

Seeing the opening, the Drakon Riders flew over infantry formations and parked behind the enemy lines. One unit attacked careless wizard and wavered him.

At the same time Palace Guard and Storm Wind cavalry tried to distract the King and the Fallen respectively.

There were a lot of potential targets for the Vaangur units and it was hard to choose the most beneficial option. In the end, the Fallen attacked the Storm Wind but despite heavy damage failed to rout them.

The King and Bloodsworn smashed Palace Guard troops but the King's Chimera was not eager to move out of the forest as ordered.

The Devourers teamed up to rout more Elven Knights and the lonely wizard scared off one Drakon Riders unit all by himself! Last but not least the Cavern Dweller attacked Sea Guard who defended one of the objectives.

(Edit: I forgot to remove the token from the map but the one in the very middle was burned by the Bloodsworn as I was concerned if they were going to survive next turn)

Despite successful attack, some of the Varangur units were in grave danger. Drakon Riders managed to get rid of both wizards and teamed up with Palce Guard attacking from the flank against the Bloodsworn. Without inspiring presence of their leaders, Varangur infantry was routed.

Drakon Lord rear charged the King but even this attack was not enough to impress the beast he was sitting on.

Last but not least, the Palace Guard troop charged the exposed flank of the second unit of Bloodsworn but alone they were not strong enough to stop their enemies.

Varangur units continued their rampage and more Elven units died. Storm Wind and Palace Guard Troops were routed while the Devourers wavered both Silver Breeze units with their breath attacks.

After suffering heavy losses, the Elven units focused on claiming the objectives. The Drakon Riders flew to the safety and Silver Breeze unit in the middle destroyed their token so that the enemy could not claim it.

Varangur army was now on full offensive and more Elven units paid the ultimate price. Both Silver Breeze units died to the charges of the Devourers. The Bloodsworn routed the Drakon Lord while the King and the Cavern Dweller sped towards the Sea Guard.

Unfortunately for Varangur army, the Devourers where either too late (in the middle) or too far (in the bottom left) to claim the objectives and armies ended up controlling two objectives each. A draw! but paid in blood by Elves for sure.

First of all I would like to thank Ed for taking time and helping me to prepare for the tournament. It was a very interesting game to play with an army that represents completely different approach and at the same time to play against my own. I wish I had more opportunities like that. In fact, it would be fantastic to play first game with my opponents force and then swap back to our own armies for the second game immediately!

Looking back at this game there are a few things I would do differently. First, I would position 3 tokens I was given in the middle of the battle field but all on the left side. Basically, instead of keeping the Fallen in the forest, I would march entire army toward the objectives.

Second, I noticed that this army needs to be used more aggressively and can take a few flank charges so as long as I could prevent these combined attacks, I could move forward and get attacked.

I would have changed the deployment a bit, with the Fallen in between the infantry so that they can move and intercept anything that attempts to move too far forward.

It seems to me that I was a bit too shy and that is why I could not reach the objectives in time. If I had 7th turn I would have been able to win I think but then counting on turn 7 is not what I should do.

I obviously made a mistake with the wizard by leaving enough space for Drakon Riders to get attacked. Perhaps it was also wrong decision and I would probably shoot at Silver Breeze instead if we played the same game again. With proper positioning I should have been able to cover the landing zones and keep wizards intact.

Next, I wonder if I should have turned Devourers around to breath at the Drakon Riders. I am not so sure because it would have most likely expose them to attacks and the unit was fresh. They did very well by attacking Storm Wind and then getting into position to harass Silver Breeze cavalry.

In the end Varangur army proved to be very resilient and powerful in melee as I always imagined it would be. I hoped that this experience would help me to fight against Ken at the Masters :)

Thanks for reading!
Posted by Swordmaster at 20:06