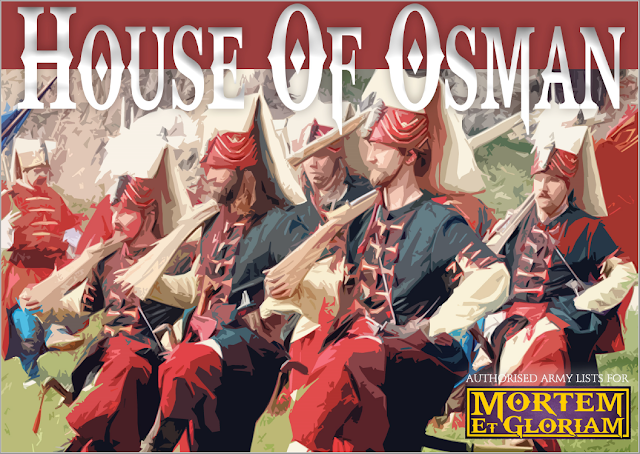 In my first (and so far, only!) game of Mortem et Gloriam in 2021 I played against my usual opponent Paul, who decided that "New Year - New Army" is going to be his motto. After a few battles against his Muslim Indian Sultanates, it was time to fight against completely different enemy - Ottoman Turkish!

Paul chose 1400 C.E. as the year for his army so it was only 16 centuries that separated our armies! However, both empires controlled some of the same territories in their time!

What is also interesting in Paul's force is that it also had Serbian allies included. Quite a colourful army to fight against for sure! 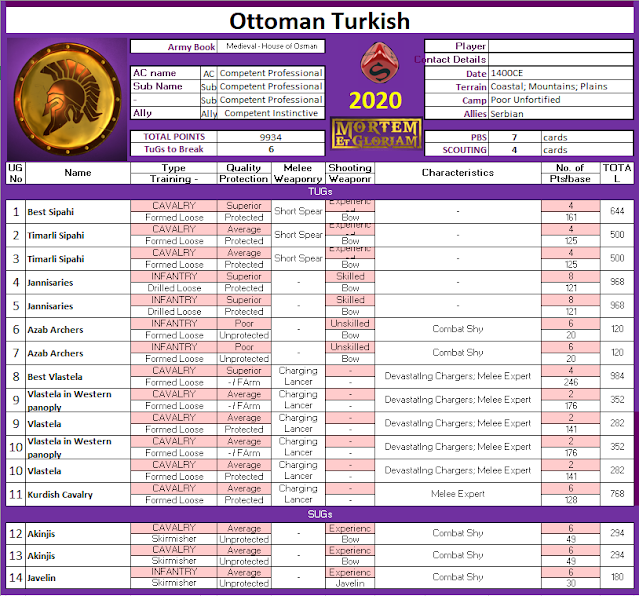 I must admit I was concerned with all the shooting Paul's army had. It was always a challenge for my slow phalanx to advance under the fire. At the very least it can slow them down, and often the casualties pile up anyway.

Paul's army had some very good combat orientated TuG's as well. The Serbian contingent alone was very dangerous, while Jannisaries and Sipahi provided a very flexible elements to the army as well.

I expected that Paul would want to soften down my units with shooting, use the numerical and cavalry advantage to get to the better positions, outmanoeuvring my slower army. And finish it off with well timed charges from flanks and rears.

My goal would be, of course, not to let that happen!  Here is my army I used in this battle: 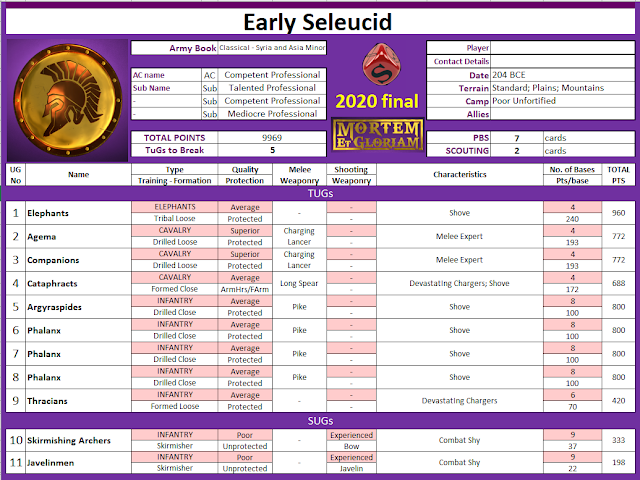 Paul's army had more units and was generally faster so I needed some terrain to negate that advantage. Fortunately, I managed to keep my village and I got it in the middle. In this way I could divide the battle field. The question was, should I choose the secure flank to lean on or not?

Paul had more cards to scout so I expected to lose in that department badly but if I remember correctly it was not that bad. Of course, I ended up deploying my army before he finished but I don't think anything out of ordinary happened in the pre-battle phase.

I decided to deploy majority of the army on the Western flank instead. I was able to squeeze the units in the narrow passage between the woods and the village. The plan was to move forward and expand so that one flank would be always protected.

I left one Phalanx TuG to guard the camp and I attached Javelinmen as help against enemy shooters. While they were far away at the moment, the Sipahi would cover the distance really fast anyway. I also deployed Thracians near the village so they get some protection against cavalry. But also to allow them to be a bit annoying if any of the enemy TuG's would approach show up in some proximity to the village.

Paul divided his army in what looked like three groups. The one on the West had some horse archers so I hoped the Cataphracts would be a good shield against them. Superior Companions should also be less affected by shooting. While phalanx should keep Kurdish cavalry in check.

The Serbian contingent was a problem unless I could attack it with Elephants and phalanx. However, Jannisaries could make it problematic so I had Agema in reserve to, hopefully, distract the Turkish infantry.

Thus the plan was to block the passage to the camp and lead the attack on the Western flank against half of the enemy army. Before the rest would come to the rescue.

Both armies begun their opening manoeuvres. Turks sent their fast cavalry contingents on the flanks to envelop enemy formations, while Seleucids started the unfolding of their battle line. One of the Serbian Vlastela was also sent forward deep into enemy territory.

Seleucids finally managed to expand their battle line but not without some difficulties. One of the phalanxes had to remain in the second line as the co-ordination was not perfect.

At the same time, Turkish skirmishers tried to slow down the Seleucids Companions and Cataphracts. Cavalry kept the safe distance, with some TuG's continuing the outflanking moves.

Seleucids continued their advance, with the Companions and Cataphracts leading the way on the flank. Their enemies there still kept the distance, drawing them deeper and deeper into their territory.

The Elephants and one of the phalanxes turned towards the centre. Serbian Vlastela cavalry TuG's used that as an opportunity and moved into the gaps in the Seleucids formation.

Finally the first contingents were committed to close combat! On the Western flank, the Companions chased away the enemy horse archers while Cataphracts tied down the Kurdish cavalry.

Elephants moved towards one TuG of the Serebian knights but was immediately outflanked by another. The nearby phalanx marched hard to plug the gap in the battle line!

At the same time, another phalanx was caught off guard by the third group of Vlastela and suffered heavy losses. Fortunately for Seleucids, they managed to regroup, reform and faced the enemy with their pikes ready.

However, the flank of the Seleucids formation was in grave danger.

The events of the battle started to unfold very fast and in a dramatic way. Serbian knights attempted to charge the exposed flank of the Seleucid Elephants but that plan was destroyed by the intercepting phalangites. In turn, Elephants were free to charge the knights in front of them and broke them in a furious attack! What is worse for the Vlastela contingent, the third TuG was now caught in the open and attacked by Thracians while still fighting the phalanx to the front. It was too much for them too and suddenly the Serbian allied force was reduced to one third of its initial strength.

Seleucids also launched a successful attack on the Kurdish cavalry on the Western flank. The charge of the Companions together with the phalangites from two directions resulted in the rout. While hot pursuit led the Companions to a very good position to attack the Jannisaries. Currently distracted by the Agema advancing from the front.

Although Seleucids routed three of the enemy TuG's, it was not without casualties of their own. One of the phalanxes was routed by Jannisaries who used the opportunity and shot at the badly wounded TuG of Seleucid infantry. Then they moved to position to threaten another one. Could Serbian knights hold long enough for them to attack?

Once again, the timing of the charges by respective units was crucial. Thracians charged the exposed Jannisaries before they could attack the flank of the phalanx. Although Thracians were caught by Sipahi shortly after, that allowed the phalanx to rout the enemy cavalry in turn.

When Companions and Agema destroyed another TuG of Jannisaries in a well coordinated charge and when Elephants were now heading towards the enemy camp, it was clear that Seleucids were now very close to winning the battle.

In the final moments of the battle, Seleucids Elephants charged enemy archers who stood no chance against such opponent. While a few Turkish units were still capable of fighting the battle, the army was broken and the survivors withdrew, leaving the camp at the mercy of the victorious enemy.

Many thanks to Paul for another fantastic game! Although the final score was 15:5 in my favour, closer look at the condition of the units would show much different story!

Cataphracts were just one wound short of breaking and the horse archers were not able to land that final blow, despite many attempts! And one of the phalanxes barely escaped thanks to the sacrifice of Thracians.

I must admit that the game did not start how I wanted because I underestimated the way my army could manoeuvre through the narrow gap. But what I thought is a mistake (one of the phalanxes was left behind), turned out to be an opportunity to save my overexposed units.

When we talked with Paul about crucial moments of the battle, we agreed that the phalanx that lagged behind saved the day with the timely intercept of the charging Serbian knights. It prevented potentially devastating flank attack against Elephants and continuation against the units that were fighting against Kurdish cavalry and Jannisaries. Not to mention that the Vlastela was then routed instead.

I got lucky when the earlier charge by the knights against flank of the phalanx did not result in the rout as well. It was quite possible but perhaps illustrates the necessity to attack from two directions at the same time. I am glad I sent the Thracians to the village for exactly such situations so that they could help when needed. Then I had them in the right position to stop Jannisaries in their tracks. Just to buy one more round of melee to win against the last of the Serbian knights.

The plan on the Western flank also worked and I managed to outmanoeuvre Kurdish cavalry and catch Jannisaries in the attack from two sides. It would not have happened without the intercepting phalanx as well, so it is really interesting to play the game when single move had such far reaching consequences.

While the actions near my camp where not as spectacular, the ability to block Sipahi from charging the camp was very important too. What is more, the annoying Javelinmen prevented them from inflicting damage on the pahalnx with the shooting as well!

It was a very interesting battle from my perspective and I hope you enjoyed the battle report. As always, I am very interested in your comments on the game!

Posted by Swordmaster at 22:53