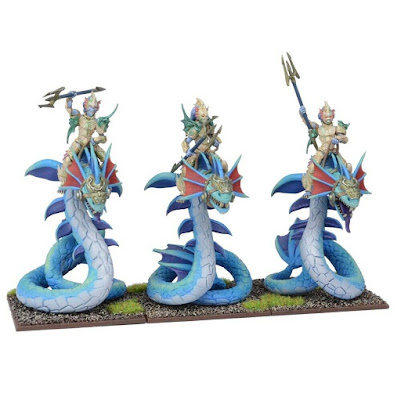 In the first round I was paired with Ben Rantall from the Direct Misfire podcast crew! We have just played against each other in the previous tournament so it was great to have an opportunity for a re-match. This time, however, Ben chose Forces of Nature army and here is his list:

Ben's army has 11 elements total with a combined unit strength of 20. He chose a variety of different units, with only Earth Elementals and Druids duplicated. The initial impression I had after looking at Ben's list was that his army is generally more resilient (due to either good nerve or regeneration), with quite a number of Elemental units that cannot be wavered but perhaps a bit slower than my force. It also seemed to have a bit less ranged attacks.

It meant that I needed to focus my own ranged attacks on the units that cannot regenerate the damage. That almost immediately singled out Air Elementals as preferred target, as they also have Defence 4+ as opposed to 5+/6+ of other Elementals. At the same time I hoped to be able to use speed and manoeuvrability to either get the first charge or even better, get the first multiple attack. In this way the damage should be significant to outbalance the regeneration abilities.

That's for the initial thoughts, let's have a look at the army list variant I brought to this tournament:

My army has 12 elements with 21 total unit strength so almost identical to what Ben's was. Less resilient, however, with no regenerative abilities.

Let's have a look at the terrain and scenario now.

Since I wanted to use speed my advantage, I thought that if I place Stormwind and Palace Guard units with the support of Drakon Riders and Lord on the flank, I would be able to charge early. As the attack would be on the flank, I had a chance to create more space there so that I could start outflanking the enemy as a result. In addition, placing a token worth 2 points there would also help me control it at the same time.

This is why I decided to place my tokens in the following order and from left to right: 0,0,1,1,2. I didn't know where Ben placed his tokens but I focused on controlling mine first. This is also the reason I added Silverbreeze and Archmage to the group so that they could inflict some damage as well, either helping break the enemy on the charge or finish off those that were already wounded. And to control the tokens in the end.

If, on top of that, I would be able to delay the enemy and contest at least one of the tokens on my half, that should allow me to win by scenario.

As a side effect of me placing tokens close to the middle line (to be able to control them even if we fought around them), I forced Ben to place his tokens further down. It was not intentional but gave me some food for thought for later games.

Ben chose to move first after winning the roll off. This time I decided not to scout with Forest Shamblers, because I was concerned they would be quickly overwhelmed by the numerically superior foe.

As the Elven army was not yet in the range of attack for Naiad Heartpiercers, the entire army simply advanced towards their enemies. Only the Unicorn was able to open fire with some Lightning Bolts but these did not do any damage.

Elven forces on the left flank moved back a bit to avoid being charged. While majority of the army on the right advanced forward. Silverbreeze cavalry and the Archmage focused their fire on Air Elementals, using Palace Guard as a protection from the enemy attacks.

Almost entire army kept advancing through the centre of the battle field. Only the units on the flank facing majority of the Elven army kept the distance.

Naiad Heartpiercers finally got into a range for shooting and inflicted significant damage on the Forest Shamblers.

Drakon Riders and Drakon Lord attacked the Wyrmriders to allow Stormwind cavalry to get into the position for an attack. At the same time, Palace Guard continued keeping tight formation so that Silverbreeze and the Archmage continued shooting at the Air Elementals. The damage was done but it was not piling up as fast as Elves hoped for.

Whatever damage was inflicted upon Wyrm Riders was regenerated and they focused on the Drakon Lord as a target of the counter-charge. At the same time, the Unicorn grounded the regiment of the Drakon Riders fighting nearby. As a result, all units got locked in combat, with not much space for other elements to join!

The things did not go according to the plan so Elves stopped the advance and continued the shooting. Once again, the damage was done to the Air Elementals and once again, it was not yet enough to get rod of them.

This time it is the turn for Forces of Nature to attack. In the centre of the battle field the Water Elementals defeat the damaged regiment of the Forest Shamblers. The Naiad Ensnarers follow close behind.

The Hydra on the opposite flank charges grounded Drakon Riders and scatters them. Unfortunately, the stubborn Drakon Lord refuses to give up and keeps fighting alone against the horde of Wyrm Riders.

Elves are forced to commit under less than ideal circumstances but it is either this or to be attacked first instead. Drakon Riders and the Lord attack Heartpiercers in the centre but are not able to defeat them.

At the same time, the main attack goes against Hydra, who is not able to hold the ground against the elite Elven warriors. Finally, Silverbreeze cavalry manages to score enough damage against Air Elementals and they go down as well.

The battle entered what seemed to be attrition phase with many units engaged in melee. Forces of Nature were getting closer to their objectives in the centre while Wyrm Riders and Unicorn attempted to hold off the advancing Elven units.

Despite best efforts of the Palace Guard, the Wyrm Riders still refused to yield. With the Unicorn distracting the Stormwind, it was putting a lot of pressure on Elven forces. Not only they were not able to defeat their enemies, but also put at risk the control over the objectives!

It appeared that Elves were not able to slow down the army of the Forces of Nature enough to prevent it from controlling the objectives. Three of them were firmly under its control. To make things worse for Elves, Wyrm Riders wavered Palace Guard, with both Elven infantry regiments in grave danger now.

Fortunately for Elves, they still had a few fast units and a few unclaimed objectives to control. Although Stormwind cavalry managed to attack Wyrm Riders (at last!), the damage was still not enough to rout them!

Elves barely held to the positions and luckily for them, Forces of Nature army was content with the draw and withdrew from the battle field in good order. One more push and Elves would have lost this battle!

Many thanks to Bensome for another great game! Even though this time the battle did not result in many casualties and we both were quite cautious during it, I had a lot of fun! It was definitely great to play against Bensome again!

I think he did very well by being patient and while not committing his units recklessly, he was able to advance towards his objectives steadily. In the end, he secured enough to make me struggle to save a draw. And it was only because he was a great sport and a gentlemen to allow me to count in one of the objectives, where I did not position my unit exactly at 3" mark from it. I really appreciate it and I still feel really embarrassed at such a silly mistake on my part.

I believe that if the game went for one more turn, I could have lost. Wyrm Riders could have defeated Stormwind (I did not have Inspiring presence nearby), Earth Elementals were close to breaking Palace Guard and Heartpiercers could have eliminated one of the Silverbreeze troops too. I had no resources left to compensate from that.

Things did not go according to the plan. To begin with, I did not have enough room to attack with Stormwind against Wyrm Riders after the initial attack by the fliers. I should have seen that. This slowed down the units there, did not win me the flank at all and in the end, I risked losing the objective as well.

I also wonder if I should have advanced towards the enemies on the left flank instead of withdrawing. For instance, if I attacked earlier, perhaps that would have been enough to slow the enemy down a bit more.

How would you approach this scenario with either of the armies featured? Do you think it was a good idea to place the tokens on one half? Please let me know in the comments!

Posted by Swordmaster at 22:22