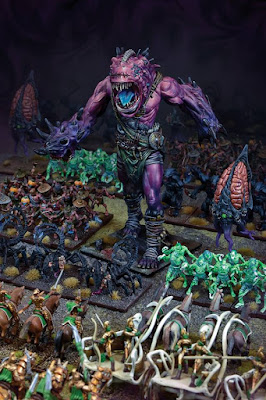 In the third round I was about to play against Jeff. After our last game I was even less optimistic about my chances, especially that Jeff brought his Night Stalkers army. I consider this force one of his most dangerous and tough to win against armies.

However, games against Jeff are always great and allow me to learn something new!

The army of Night Stalkers Jeff created is indeed a tough nut to crack. Very resilient and highly dependable, thanks to the core of the army composed of Phantoms and Shadow Hulks. Fast and mobile Fiends and in particularly Dread-Fiends create all sorts of problems are are very difficult to stop or even block.

In general, although the army does not really have any ranged attacks, it has a lot of units that are not easy to eliminate, especially by the regiments I have, that need combined attacks to do so.

Here are the details of the army Jeff used:

Jeff's army is obviously melee orientated. Due to Stealthy rule, the enemy shooting can be mitigated but on its own it is not a guarantee of a success. That's why this army has a lot of resilience due to redundancy, many units are replicated. Mainstay of the army, Phantoms and Shadow-Hulks, are very reliable as they cannot be wavered.

It has 14 elements but all of them scoring. Total unit strength of the army is 22. Not necessarily the top of what Jeff's armies can be but very reliable. In addition, the army is fast, even if Phantoms are Shambling. It is due to the fact they can still charge far and with Nimble and Surge, they can get into good attacking positions.

I must admit I always struggled to come up with a good plan against this force. I came to the conclusion that is because I often run out of time and units to deal with it all. If you focus on units, the heroes can still claim objectives and are very good at doing damage even on their own. If you try to contain heroes, the units will do the same.

I expected that Jeff would advance fast, regardless of the scenario, to limit my options for movement as my army needs that space for manoeuvres. One thing I learned in my games against Jeff that one needs to be both patient and decisive in his actions. One one hand patient, not to commit units in the wrong moment but decisive, so that when you finally attack, it is with the results you need to achieve.


In this game we played Occupy as scenario. We had three white objectives, all worth 1 points to each player. Orange objectives are worth 2 points each. However, only the objective in the opponent's half of the battle field gives you any points. The one in your own half can only be contested.

We ended up with relative symmetrical placement. My general plan was to use a bit of shooting to soften the incoming units, in particular Fiends, as they seemed more vulnerable to fire. I also deployed more or less in a single line, simply to be able to have more options to act when opportunities arise. I only put both Wardens on the left so that I had a few more elements there to control the objective.


Elves advanced across the entire battle field, patiently, keeping safe distance from their enemies. The shooters, as usual, aimed together at a single target. This time one of the Fiends horde was the first to take the hit. Not enough to rout them but it was just the beginning.


On the contrary, Night Stalkers did not advance slowly. Especially units in the centre sped up, with Shadow Hulk and Dread-Fiends leading the way. That meant the Elves were under the pressure early on!


Elves resisted the temptation to charge early in the battle. Only one brave Chariot riding Noble decided to attack on his own, in order to slow the advance.

Many units withdrew, not to avoid the potential attacks completely but to limit the options for their foes. And the Shooters still opened the fire, this time mainly at the Shadow Hulk.


Night Stalkers did not wait for another salvo and charged in. Phantoms on the left were unnaturally fast and manoeuvrable and caught Forest Shamblers off guard. Fortunately, they held their ground.

Dread-Fiends teamed up and intercepted Elven Knights while the Phantoms on the right flank charged in through the forest. Although Elves got damaged badly, they held their ground. Just.


Elves had to react quickly and decisively, There were a few good flank attack options and Elves took the opportunities. Unfortunately, although Drakons caught and destroyed the horde of Fiends, stubborn Shadow-Hulk refused to yield.

On the other hand, a gable on the right flank paid off. Elves sent their Army Standard away as it, for some unknown reason, invigorated Phantoms. That distraction allowed Shamblers to completely rout one group of these and Pheonix Guard to badly damage the other!


Night Stalkers continued the rampage and this time Elves were subject to a full scale attack that saw no less but five units completely demolished! That was really powerful strike by Night Stalkers! Is it the end of the Elven army already?


The situation was dire but Elves did not give up. Instead, they focused their efforts on the left flank where they still had some fighting units. It brought some local success as two more groups of Phantoms were defeated and Elves gained some space to regroup.


Not all Elven units could escape this time and Chariots as well as Windborne cavalry had to flee the battle. Although Elves had a bit of space to manoeuvre on the left, Night Stialkers seemed to control centre and right flank.


Elves formed a new battle line facing the first wave of the Night Stalkers approaching through the middle of the battle field. Elves managed to hold on their main objective for now but it was clear they would have to fight to keep it.

While Drakon Lords used they speed and manoeuvrability to land on opposite sides of the Night Stalkers formation, a bit of shooting finally toppled down one of the Shadow-Hulks!


Night Stalkers continued their advance but this time only Fiends attacked Elves and captured another Noble. On the other hand, Dread-Fiends formed defensively to block Elven Drakon Lords from capturing the centre.


Elves kept on fighting despite the losses. And it proved to be working as Drakon Riders, with the help of the nearby Warden, managed to defeat the Fiends! At the same time, Drakon Lords teamed up and killed the Shadow Hulk.


Thanks to manoeuvrability, Elves managed to avoid majority of the enemy units. They had to hold one more time, however and they did!

For now, Night Stalkers were controlling majority of the objectives but Elves decided to push one last time!


Elves were determined to fight till the very end and they have already made Night Stalkers pay heavily. In the last charges Drakon Riders defeated one of the Butchers and reclaimed the objective for good.

One of the Wardens held onto second objective while Palace Guard and both Drakon Lords fought against Dread- Fiends. Unfortunately neither of the nightmarish warriors yielded and the last word still belonged to the Night Stalkers!


In the final fight there were only a few units that could engage in a fight. The most crucial one was in the centre where Drakon Lord held his ground. As a result, neither army achieved a strategic advantage and the battle, although bloody, ended with a draw!

Many thanks to Jeff for a fantastic game! I was on the ropes, especially after the powerful attack in turn 3 but I am super happy I was able to claw my way back to the game and even save the draw in the end!

There were quite a few very interesting moments in this game, where some units held the ground against all odds (that stubborn Shadow-Hulk!) while others perished faster than expected (some Phantoms).

I am glad the gamble with moving Army Standard away paid off as Phantoms were not able to use the Mindthirst rule. It was not a guarantee but I managed to get rid of one of the units and badly damage the other. Army Standard tried hard for half a game to land that one wound on them to force another break test but no luck here.

It may not have been that visible in the descriptions, but Drain Life was helpful as well, I think I was adding a wound or two here and there and that always helps improving the odds.

Jeff did great with a few of his Surge moves and I need to cover that base in the future games. He was winning in turn 6 but fortunately for me, turn 7 happened and I regained the control over the primary objective. I even had a chance to rout Dread-Fiends but the odds were not on my side. For example, to rout the one with 9 pints of damage I still needed an 8 on nerve test twice.

In the end, I was super happy with this result as I usually lose badly against Jeff. Not only I got a draw this time but it was against this nightmarish army of his!

Thanks for reading!
Posted by Swordmaster at 16:34