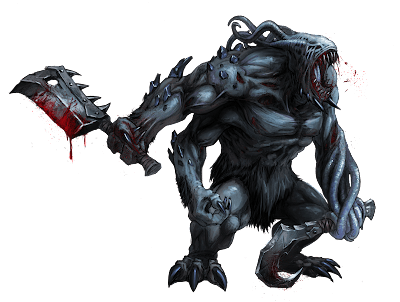 It has been ages since my last game of Kings of War so I am really happy to post this battle report! Even more so that this time I played against Simon, the gaming buddy from the times of Warhammer. We had a few games in Kings of War too. It was thus great to play another game, especially after a long break.

This time Simon decided to bring his Night Stalkers army, which he says he based on Forest Ghosts and Terrors model-wise. It would be fantastic to play against such an army from haunted forest with real models! For now, however, we were happy to play on Universal Battle. :)

One aspect of Kings of War I like a lot is that even in the frame of a single faction one can build various army lists that are significantly different from each other. It was certainly the case in here because I compared the force Simon created to those, for instance, that Jeff played with in our previous battles. It is truly amazing how many options are out there and it is a true testimony to a well designed game!

Here are the details of Simon's army (we played at 2000 points per side):

Butchers and Shadow Hulk are in Butcher's Block Formation.


One of the most potent weapons this army deploys is how it affects the nerve of the opposing units. Combination of Portal of Despair effect and the presence of Funny Bone means that Nerve values are decreased by 2. Add to it the fact that Butchers and Shadow Hulk have Brutal special rule and you effectively dropped nerve value by 3 before you start counting any damage! I wanted to make sure that I will not let all three to be combined at any stage.

Second element I noticed is that there were six units that came equipped with Shambling special rule. And they were supported by two heroes with Surge spells. Not to the level of any Undead force, for example, but something I had to take into account. Perhaps with Phantoms in particular due to their Fly ability.

My personal favourite, however, is the regiment of Nightmares with their speed, manoeuvrability, good hitting power and Windblast.

In general, this army had 13 elements, 10 scoring and total unit strength of 17. It is a slower force but the one that can potentially use Surge, thus having a bit different movement dynamics. It can soak up some damage and limit the incoming fire due to Stealth.

My army has thus 14 elements, 13 scoring units and total Unit Strength of 18. It means that we were almost equal in terms of number of elements and unit strength, with a bit of advantage in scoring units on my side.


We got the Loot scenario and I won the roll off to place the first token. I chose to position the one on the left so that the last token cannot be positioned on the same half of the battle field. I needed slower Night Stalkers to spread their forces.

Although it is hard to inflict damage on Stealthy units, I decided to deploy my shooters in the middle anyway. The reason was that I could move them to either flank if needed and use them to shoot at any target that was approaching the central loot.

I wanted to use my forces on the left to grab the objective there and create a favourable melee situations. If I could win that flank that would help me in the centre. Drakons on the right were there to keep enemy units on that site in check and with their speed and manoeuvrability, they should also be able to help in the centre in the end.


Elven forces moved towards their enemies as per tactical plan decided by their commanders. Forest Shamblers shielded the Warden so that he could pick the first loot token. While on the other side of the battle field the Drakons and the Lord set up the trap for the Nightmares.

The shooters decided to aim at the vile portal but mainly due to lack of better targets. Everything else was in cover after all.


The units on the left flank did not attempt to attack the Shamblers as the trap was all too obvious. However, Nightmares took the bait and charged the Drakon Riders. They took some damage but not enough to be routed and now they were getting ready to counter charge.


Drakon Riders and Drakon Lord routed Nightmares on the right flank and obtained a bit of more freedom of movement there.

The units in the middle stopped and aimed at Butchers but the arrows could not penetrate their armor at all.

Finally, the Drakon Lord on the left flank also used the Shamblers to get into the position for the attack.


Elven units made mistakes and it was time to pay the price. Drakon Lord was a bit careless and landed too close to Shadow-Hulk. It immediately charged to the slightly exposed flank of the Elven Lord and gave him no chance to survive.

The regiment of Palace Guard also move a bit too close, especially to Terror. This monster, assisted by Phantoms, crashed into the ranks of Elven infantry and soon after the unit was scattered completely.


The Elven units in the centre moved backwards to buy more time and shoot at the advancing Butchers but once again the efficiency of the shooting was not what they expected.

On the left flank, Storm Wind charged into Phantoms but despite significant amount of damage, they were not yet able to break their enemies.

Shamblers attacked the Ripper while Drakons avoided the Shadow-Hulk and landed in the safe spot.


This time Elven Chariots did not move enough to avoid the Butchers and got attacked. Unfortunately, they did not hold their ground and Night Stalkers created yet another gap in the Elven formation.

In the meantime. the Terror returned to the middle of the battle field to collect one of the treasures buried there.


Drakon Riders on both flanks of the battle field charged to the respective sides of their chosen targets. Unfortunately, despite overwhelming advantage, both units held their ground against all odds!

Only Storm Wind cavalry destroyed Phantoms, that were already badly damaged after their initial attacks, and continued forward to close in on the Terror.

Night Stalkers used the new opportunity very well and destroyed two Elven regiments and, what s more important, claimed one of the loot! Elven regiments on the flanks were also intercepted and stopped in their advance.


Although the things did not go according to the plan, Elves adapted quickly and mounted devastating counter attack. Palace Guard and Silver Breeze cavalry teamed up to rout the Butchers to secure the back line. While Storm Wind and Nimble Chariot Nobles attacked the Terror, destroyed the monster and reclaimed the Loot - back in the game!


The Shadow Hulk easily avoided the Warden and charged Drakon Riders. They tried to hold but were not successful and the beast routed them.

On the opposite side of the battle field the Dopplegangers claimed last treasure and assumed defensive position with the Butchers covering their back.


Elves were running out of time and had to make the most out of it. Unfortunately, Storm Wind cavalry was slowed down by the Scarecrows and count not charge the rampaging Shadow Hulk.

Elves had to make a tough choice and decided to focus their shooting on Dopplegangers. The damage was substantial but not significant enough to destroy the unit. Night Stalkers were still in the possession of the Loot!


Although Night Stalkers suffered significant casualties and were running out of the units, the individuals still played a vital role in slowing down their enemies. Thanks to that Storm Wind cavalry was boxed again, while Dopplegangers passed the treasure to the Butchers.

Elves were too far to make another attempt at recovering some of the stolen treasure and had to concede defeat.

Congratulations to Simon for a well deserved victory! He did very well executing his plan, keeping units in mutual support and exploiting my mistakes. I liked the way he used Dopplegangers, individual and Butchers to secure the last piece of the loot in particular.

I made quite a number of avoidable mistakes and I was not particularly happy about it. :) I wonder if the few months break is not a factor in here. I certainly hope to get back to shape soon! It was really bad to position Drakon Lord a bit too close to the Shadow Hulk and let it charge my hero into the flank.

Then I moved Palace Guard and Chariots too close as well and both units got charged by the enemy. I was not doing a good job in blocking the Hulk with the Warden, although it was still possible to prevent these charges against Shamblers and Drakons with a bit of a shift here and there.

But these are straightforward mistakes and they can be avoided in the future by being more careful with positioning of the units. Hence I focused on analysing what I could have done differently, in particular after I made the mistakes.

I came to the conclusion that I could have done better job after destroying the Terror. First, instead of turning Storm Wind to try and attack Shadow Hulk, I should have pressed forward towards the centre of the battle field. That would have given me the opportunity to attack Deopplegangers and/or Butchers. Or even the Portal in order to get into a better position.

With Drakon Lord threatening from the back and Palace Guard from the front, I had some good force there to take on two remaining units guarding the treasure.

In the meantime, the shooters would have focused on the Shadow Hulk and perhaps have had better chance at destroying it during the remaining 2 turns of the game.

I think it was a great game, despite the mistakes. It was interesting to see the Loot changing hands and both sides working hard to win the battle. And it was rally good to catch up with Simon and play against each other after such a long break. I hope we can continue to play more regularly and definitely more often from now on!

I hope you enjoyed the report and thanks for reading!
Posted by Swordmaster at 22:05