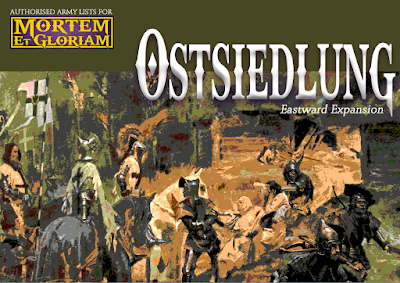 It seems that the interest in Mortem Et Gloriam is growing and more players decide to give it a go. I was very happy I could meet David and introduce him to the new system.

It also happened that a small one day event was organized in Canberra, MiniMeG II and it seemed like a perfect coincidence to have an introductory game and a practice battle at the same time. Since MiniMeG was organized as an opportunity for new players to learn the basics of the game, it was limited to 7000 points per army. We were also using Magna version of the rules, meaning that units would be smaller. However, the assumption was that it would allow to play games in shorter period of time too.

David said he has a few armies but Teutonic Order seemed to be the easiest one to prepare to the new format and system, so he went for this force this time. I played against Medieval armies before and I found it quite interesting regardless of the historical inaccuracy. Here are the details of the army David brought to our game (I apologize in advance for any mistakes and/or inconsistencies):

David's army had an advantage in the cavalry department if you think about sheer power of the charge. However, I had one more unit in total, charging lancers are drilled so more maneuverable and two skirmishing cavalry should be good at delaying the enemy.

On the other hand David had more units of both, melee and shooting infantry. It was thus important I could get to the fights one on one and protect the flanks. It meant that I really wanted to get that coastal line so that I can advance along it and perhaps have a chance of breaking the enemy infantry. At the same time I intended to slow down the enemy units on the opposing flank. I thought a few bits of terrain would help me achieve that too.

Thanks to good cards I managed to  navigate the territory well and we ended up with the river on one flank and a few pieces of terrain here and there. I was happy with the difficult going on my center-right as it allowed better protection and further narrowed the battle field.

I think I outscouted David by small margin. However, I didn't feel as if had particularly high impact on how we deployed our respective forces.
Deployment

With the river on the flank and the hill I could protect the camp nicely so it went down in between two terrain features. I decided to split the Phalangites and Argyraspides to have a better control over that part of the battle field. They were close enough from each other to assist each flank of the formation. But the gaps in between allowed the cavalry to deploy there for some flexibility and a chance to exploit potential gaps in the enemy lines.

Tracians and Archers deployed across the terrain to avoid being trampled by the enemy cavalry in the open. In addition, Tarentine Cavalry was tasked with slowing down the foe further.

Horse Archers and Line Cavalry were deployed along the river to keep the opposing horsemen in check too.

The general plan was to keep the flanks protected while the phalanx advanced. Line Cavalry and Companions were close enough to assist the infantry where needed or break through any weak points in the enemy formation. If the right flank held the opponent long enough, perhaps Phalangites and Charging Lancers would be able to break through the enemy.

David was an Invader in this game so he was the active player in turn 1.

Infantry formations on both sides approached each other with Phalangites on the left shifting their positions to be able to intercept the mounted warriors of their enemies. They, however, shifted towards the center instead.

Although Seleucid formation kept moving in unison, it seemed that Crusaders were lagging behind for some reason.

Both battle lines kept closing the distance and it was clear they would clash any time soon. However, the formations broke a bit too, with the leftmost part of the Seleucid army moving further than the right side of the army. Only the Charging Lancers held a bit further back, ready to plug any gaps when required.

Respective infantry formations engaged. On the left, two Phalangite groups attacked Spearmen and pushed through them. Nearby Turcopoles tried to catch Horse Archers but they proved to be too fast.

At the same time Companions spotted a weaker link in the enemy formation and charged against the Crosbowmen, also managing to break through.

Last but not least, Argyraspides and Thracians held their ground against Militia Spearmen and wild warriors of Thrace were soon chasing their opponents.

Brother Knights led the charge against the Companion Cavalry but this fight was indecisive. Turcopoles attempted to catch Horse Archers again but this time they not only escaped but nearby Charging Lancers attacked weakened unit as well. It was too much for Turcopoles and they broke.

At this point, Teutonic Orders army reached its breaking point and Seleucids triumphed over their enemies.

I must say that was a bit surprised that the game was decided so quickly, i.e. in 1-2 turns where the units committed to melee. Small infantry units are not that good at holding the line and it seemed I rolled well enough to pile up the damage quickly.

David told me after the game that with two commanders he simply had no cards to move the Crusaders so that they could see some action. That seemed to contribute to the result as it allowed Phalangites and Thracians to fight against the Spearmen without fear of being outflanked.

Although we achieved resolution of the game we still played for 3 hours. And I cannot attribute that to any particular long break or rules discussion. In fact, I think our game went quite smoothly. Perhaps it is just inexperience of the players.