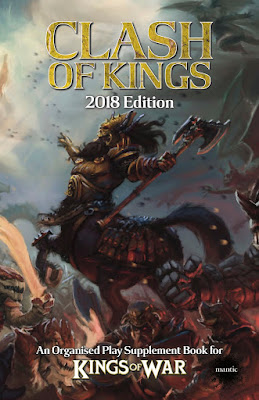 The end of the year is always a good opportunity to look back and reflect upon the plans and goals made 365 days ago. There are a few hours left of 2018 and I am very happy to say that by all means it was a good year. Also for the hobby!

I find it quite interesting to see what I planned and achieved in the last year but also to notice that there were some surprised and unexpected turns of events. However, these were not bad experiences, quite the contrary. It simply reminds me that one should be always prepared to seize the moment when new opportunity arises. Even it may often mean rearrangement of the initial plans.

2018 was certainly such a year for me and for that reason I titled this post: 2018 - Part 1. It is because there was a little unexpected development of my hobby interests. But that will be covered in Part 2. First post it dedicated to Kings of War, the game I greatly enjoyed playing this year. And I by all means I want to invest even more into in  2019!

There are a few aspects I would like to cover that are related to Kings of War as a system, so let's start with the games!

I played 32 games in 2018. It may not seem to be a huge number but it is almost the same amount as last year. And this year I embarked on a journey with a second, parallel gaming system not to mention that real life demands also intensified. I consider it a success that despite that I still played similar amount of games in Kings of War.

I hope to increase the number of games played in 2019. I think it is possible to reach around 50 games per year with average 1 game per week. It simply requires proper planning, especially that I always want to write battle reports from my games! One way that can help in achieving this is to attend more events.

Attending events was always important part of the hobby for me. It is always a great opportunity to meet new people, catch up with those I met before and simply support the game. Nothing helps to grow the interest of potential new players as the sight of beautiful armies on great looking tables during the event with large number of participants.

This is something I would like to improve. For various reasons I did not attend as many events as initially planned. My goal will be to attend more events this year, hopefully including some interstate ones as well!

I continued using Universal Battle 2 in addition to the games played with real models. I played mainly against Jeff and Ed this year but I can see that there is more and more interest in using it by Kings of War players. It is great because it will allow KoW enthusiasts to play against each other even if they are on different continents.

This year I helped 2 players to start using it and I hope I will be able to provide further assistance to even more in 2019!

Unfortunately, I was not able to accommodate changes smoothly in all aspects of the hobby. The fact I diverted painting time to models for the other system meant I had none to spare for Kings of War. Looking back I can see that it was still possible to do with better planning. However, lessons were learned and as I do miss painting fantasy models I am sure I will get back to it soon.

I did a quick review of the state of the models and in general I do not have that much to paint for new units. I added only 1 new regiment as the army list evolved and I would also need 1-2 new heroes. Other units can still be used as they are. That means I have 3 types of units I want to paint this year:

1. The units/heroes I have started painting but are not finished yet - above War Chariots are the main example.
2. New units that were added to the list in the meantime - this will include a Prince with Wings and a regiment of Forest Shamblers, accompanied by the Forest Warden.
3. Existing units replaced by newly painted ones - I have a collection of models I want to paint and I intend to do replace old models with newly painted ones, based for Kings of War. T

It may not look as much, especially when it is considered what I need to field fully painted army. However, in order to replace all the old units I will need quite a strict plan and no distractions! But if that works I should be able to finish all the improvements this year. Fingers crossed! 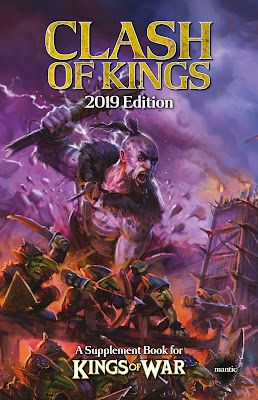 I have already tried a few new things that Clash of Kings 2019 provided. Adapting army lists to the rules changes is obviously one of the main activities for many KoW players. I am not an exception, although I will continue using my MSU style army.

I usually add only a few changes so that I can better assess what is their impact on the army and my games. Some of those changes are not necessarily inspired by CoK 2019. For example, I started using Forest Shamblers prior to the release and I intend to experiment with them further.

However, one small element of the new additions in CoK2019 caught my attention. I like Windborne cavalry a lot and I intend to use them again. What is more, CoK2019 added new artifact, Zephyr Crown, that allows the caster with Windblast to inflict some damage. Expect such Mage to be present in games at 2250 points.

Other than that I came to the conclusion that I need to improve my performance more than the army list itself. In particular, against Jeff and his Night Stalkers it looked like I either adapt the plan that does not work well or make too many mistakes. Or both!

The challenge thus is to come up with new battle plans and surprise my opponents with it rather than change the army list too much.

I started the blog with intend to post my battle reports. Back then I could still do it on the blog and on the forums. Now Mantic forum is closed so it seems that Battle Reports will mainly be hosted on the blog. I will, of course, keep notifying on twitter and facebook about any new content. However, I have not yet decided if I want to join any new forum to submit links to battle reports.

In any case I will continue posting them and I hope to do that more often!

However, I always aspired to provide more varied types of articles. I have not done so for the modelling/painting aspect of the hobby that much this year. I intend to change that, even if the posts are not full descriptions of how I painted particular model and/or unit.

I hope I will be able to organize 3rd Monster March as such events help people to carry on with their projects and complete painting models that require significant amount of time to paint.

It looks like what I plan to do in 2019 will keep me quite busy. However, I an always curious about your feedback. Is there something you would like to see on this blog? What would be a good thing to improve?

I would love to hear from you so that whatever I post is going to be even more entertaining.

In the meantime, I would like to thank you for reading my blog in the last year and I hope that 2019 will bring even more posts that you would enjoy reading.

Posted by Swordmaster at 18:27