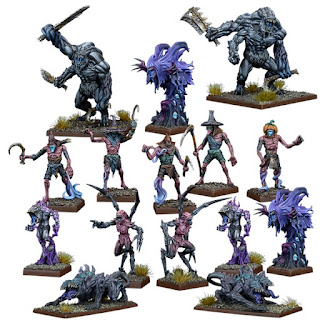 As the deadline to submit army lists for Australian Masters was getting closer, the preparation intensified.  I tried to find time for more frequent games so that Jeff could finalize the version of his force. This time he decided to test yet another idea, Night Stalkers with Abyssal Dwarves allies.

Allied contingent is always an interesting option. For some, it may merely be a way to address the issue they perceive they chosen faction has. For others, it is a great opportunity to further personalize the army they play with. Even more so if that contributes to new modelling and painting projects.

Whatever the reason, it almost always makes the army look more varied as by default there is higher degree of diversity thanks to the presence of different units.

Here are the details of the army Jeff took this time:

On one hand not much has changed. Jeff still brought three hordes of infantry, two flying heroes, three nimble ones etc. On the other, there was a bit more shooting thanks to two heroes being equipped with breath attack.

There were also 14 elements total, all of them scoring and with combined units strength of 23. As usual, there is a lot to go through and enough to significantly limit the speed and maneuverability of my own army.

My initial conclusion was that I should not expect any dramatic changes in terms of how this army is going to play in comparison to the previous iteration. It will, however, have a bit of more diversity and should be able to contribute to each phase of the game more.

I find it quite amusing that after 100 games I still end up playing a scenario I have not played before! It is exactly the case with Ransack. In fact, this time we didn't choose it randomly but checked which one we have not played yet.

Positioning the tokens was obviously important but as both our armies have a lot of elements it was not clear if any particular set up would benefit either army. I thought it may be helpful to still spread them even though Jeff could easily counter that as he had enough scoring elements. In fact, I thought he may have a bit of an advantage here with more scoring units and those with higher unit strength.

The second element of the puzzle was the fact that tokens are not worth the same. The one in the middle (purple tree) is worth 3 points. Orange ones are worth 2 points and white ones are 1 point each. Somehow we ended up with a circle of tokens.

I assumed that if I tried to go for the middle one I would end up being surrounded and/or may be forced into war of attrition. Instead, I decided to try and deploy on both flanks. The idea was to claim or at least contest 4 tokens, 3 in my half and 1 on the right flank. Then, depending on the way the situation evolves, go for the middle or another orange objective, using my higher speed and maneuverability. However, to do that I had to inflict some damage and reduce the number of units Jeff had to balance things out.

When I noticed his asymmetric deployment I thought that if I can win on the right flank fast enough I may be able to assist the group on the left, either to help and contest some of the objectives or to claim those more valuable not yet claimed. But in order to do it I would need to be aggressive and achieve break through on the right fast.

Here is my army for the reference (I still have not changed it!):

Both groups of Elven army move forward towards their enemies. Both groups open fire at the Spectres but the damage done is not that significant yet.

Night Stalkers and their allies also move forward to meet their enemies. On the left flank one of the Dread-Fiends uses the magic of the artifact to badly wound the Drakon Lord. Proud Elven warriors did not expect such a potent attack and wavered. His companions on the opposite flank also suffered some damage and had to spend time calming down their flying mounts.

Elves had to adapt quickly. Wavered units withdrew a bit to avoid being attacked in melee, while other troops moved forward.

On the left flank the shooting continued and this time one of the Spectres troops wavered. On the right flank the shooters changed the target and aimed at the Void Lurker. The plan was to wound it before inevitable melee.

The units of both armies closed the distance on the left flank. This time Drakon Lord was not able to hold his ground and was routed after another ranged attack barrage.

The situation on the right flank was quite peculiar as units circled around the hill with only Drakons and Void Lurker visible to the opposing regiments.

Elves were ware of the passing time and decided to attack. On the left they charged two separate targets, Palace Guard regiment attacked Dread Fiend while Storm Wind and Place Guard Troop engaged Slave Orcs. Neither had a good chance to break the enemy but the plan was to pin them down and attack again soon.

On the right Drakon Riders attacked Spectres but mainly to tempt Void Lurker and Dread Fiend to counter attack them in turn. In this way, they hoped to help the rest of the troops to get into good attacking positions.

Night Stalkers mounted a counter attack that was much more effective. First, Dread-Fiend repeated the fit and wavered another unit with a single salvo of his magical breath attack. Second, its evil kin also wavered the regiment of Palace Guard. When Storm Wind cavalry perished soon after it started looking really bad for Elves.

On the right flank void Lurker and Dread Fiend routed Drakon Riders in a combined attack.

Once again Elves had to adapt and com up with a contingency plan. Palace Guard on the left flank routed Slave Orcs but the shooting was not efficient enough to even waver any of the Dread-Fiends.

On the right flank Palace Guard also charged but despite inflicting significant damage they too could not even waver their enemy.

Night Stalkers methodically pressed forward. Dread Fiend once again wavered Drakon Riders, rendering them completely useless. Palace Guard regiment perished under combined attack from Fiends and Dread Fiend (Edit: Apologies for an inaccurate map, Dread Fiend was attacking near the house while the regiment aligned next to it).

At the same time the Void Lurker attacked exposed flank of the Palace Guard troop and routed it.
Outcasts - Turn 5

The only thing Elves could do on the left flank was to delay the enemy with shooting. Unfortunately, that proved to be ineffective yet again.

Although flying Prince on the right flank managed to rout one of the Dread Fiends, the Void Lurker was not damaged heavily enough. Its regenerative abilities were amazing and all damage was recovered very fast.

Sensing the enemy was sufficiently weakened, the Night Stalkers mounted coordinated attack on the left flank and destroyed two more Elven units. Only Chariots were still holding on.

His job done, the Void Lurker simply flew away to safety, leaving Elven units out of position and unable to move to the opposite side of the battle field.

There was a small glimmer of hope for the Elves to avoid utter defeat. They could, at least in theory, reclaim the control over the center of the battle field. In order to do that they had to get rod of the Scarecrows horde sitting there. Elves inflicted some damage and prepared to attack.

Night Stalkers attacked for the last time. Their units controlled vast majority of the objectives while Elves maintained the control over only two of them. Elves did not get their chance to charge one more time as the evil magic was too strong now to stop and unnatural night fell over the battle field.

Many thanks to Jeff for another great game and congratulations on his victory!

I noticed the following pattern in our games. Whenever I lose it seems to me that the result was somewhat decided before we even started. Things tend to collapse for me very quickly. However, every time I prepare the maps for the battle reports a long list of mistakes is revealed.

This game is no exception.

As usual the deployment is a start for the analysis. While I don't necessary think the way I deployed was without potential benefits, perhaps this time I should have tried getting to that middle objective.

Next important factor for my army is how much, if at all, the shooting can contribute to the overall effort. Choosing the right target and right priorities for targets is obviously very important. I must admit this time it didn't work well at all. I spread the shooting and after some discussion about prior battles, I also tried to focus on the Void Lurker. It may be a good idea to shoot at it in general but in this game it was not the most crucial target (it was more important to get rid of the hordes to be able to claim the objectives). In addition, with its potent regenerative abilities, I need to focus more fire at the same time to be able to have a chance to rout it eventually.

These were more general conclusions about the way I approached the game. Now about the specific mistakes during the game that I really should not have made.

Getting to close to that Dread Fiend on the left was stupid. Drakon Lord got wavered, then killed. Then Drakon Riders got wavered twice and killed. My two fastest elements I really needed to be in the air all the time were grounded and destroyed doing absolutely nothing.

The split of the attack on the left between Dread Fiend and Slave Orcs was also a bad move. I had a chance to rout the Orcs on the charge if I attacked with all 3 units. More problematic was that when Palace Guard got wavered I could not really reform them without exposing the flank to the attack of either Dread Fiend or IronCaster. Such a waste!Instead of holding off the enemy and even potentially carry the fight a bit further, I simply lost that flank and control over the objectives.

I had a lot of units on the right flank against only 3 of the Night Stalkers. Yes, two of them are powerful and dangerous but they tied up bigger force for entire game. Apart from using the shooters there more efficiently, I also maneuvered too shy. I didn't not properly take into account the height 2 hill and its impact. Because of that I decided to charge minor target to tempt the bigger threats to move forward with the Drakon Riders.

Looking at this situation again I should have charged the Void Lurker with the Palace Guard instead of attacking Dread Fiend. Yes, I had a chance to rout it but I failed and as a consequence, the flank of that unit was exposed. If I attacked the Void Lurker I would pin it down and Storm Wind cavalry would have a better chance to help it later.

I should have aimed at the Dread Fiend with the shooters instead. This way I had a rare chance to actually eliminate both units and perhaps have time and resources to go after the center.

Hopefully all these lessons will one day pay off! :)

Thanks for reading!
Posted by Swordmaster at 23:05