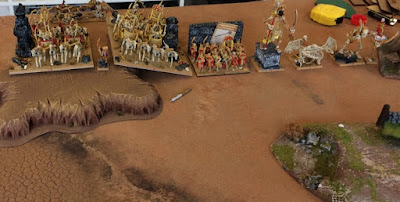 It's been a while since I have played against my fellow Wooden Spoon Master from UK so it was great to catch up with Ed again!

This year Ed plays mainly with his Empire of Dust army and he decided to bring it to the battle field this time too.

I didn't have many opportunities to play against this faction which is a shame because it has a very unique play style and look. I was curious what Ed is going to focus on and here are the details of the army he used in our game:


I think this army shows very well that we chose the factions that differ in almost all aspects. Ed further emphasized it with his unit selection and overall army composition. His force has 11 elements total and only 4 of them are units. But at the same time he has 3 big and scary monsters and combined unit strength is exactly the same as of my army.

Another element I focused on is a different type of maneuverability. Almost all elements have Shambling rule which means they may not approach the enemy very quickly. But it is not a good idea to try and land behind this army. The units can easily move to new positions and get Surged into melee. Usually from the flank for maximum effect. Giants and Bone Dragon in particular can excel at this because of their smaller foot print and good basic speed.

All elements can hit reasonably hard, but to add more flexibility, Ed has two hordes of Chariots that can shoot at the enemies as well. Against my lightly armored units that can be a problem even on its own.

That meant that I needed to eliminate or at least neutralize the Chariots first and then be patient in terms of maneuvering. While I did not want to fall into a trap and get my units attacked due to Surge, I still wanted to use potential advantage that higher number of more maneuverable units offer.

Before I move on to the deployment and scenario discussion, here is my army list for reference:
Outcasts - Army List

We got Dominate this time and I find it a very interesting scenario. It is another one that relies on Unit Strength and seems to be suitable for big, well armored hordes that can sit in the center of the battle field.

However, I also learned it may play to my advantage at the same time. Enemy units have to move forward and stay in the middle. It means the flanks can be more open. Hence, it may potentially allow my army to do what it likes to do the best, outflank the enemy and attack from all sides.

The general plan for the scenario is to use that situation to the advantage, patiently maneuver around the center, use the shooting to either create additional gaps or simply weaken the enemy further.

In the case of this particular Empire of Dust army as the enemy, I wanted to combine two ideas I have already presented. First, deploy on flanks and look for the opportunities to execute combined charges in order to dominate the center in the end. Second, focus my ranged attacks on the chariots in order to either eliminate them with shooting alone or help other units to rout them in melee. I had two fast princes that could also help in disordering either or both units so that they would not shoot at my forces. And get rid of Thunderous Charge in the process too.

If I can eliminate Chariots quickly enough, the next target would be horde of Revenants. I expected that unit to be in the center of the field and as long as it stayed there I may have not enough combined Unit Strength to win the scenario. On the other hand if I succeeded, then eliminating 3 horde units would account for a significant unit strength. In addition, all of them are quite big so they would free up the space in the middle of the battle field too.

I deployed my army a bit further away to prevent casualties from shooting if I didn't have the first turn. As Ed deployed one horde of Chariots on the left, I decided to focus my shooting on that flank. I didn't know if he is going to add second unit there at the beginning. I decided to go for the one already deployed first. If he positioned second unit on the opposite flank, I would have sent my flying prince to distract it until my shooters eliminated the first target. And then see if I could move them to shoot at the remaining chariots again. However, both units were working together so I had to deal with them at the same time.

The Elves moved around the flanks at speed. Not yet close enough to engage with the enemy directly but the shooters where in positions. All of them targeted Revenant Chariots and first damage was done.

Empire of Dust army shambled forward, with the exception of the Chariots that kept the distance from the faster enemies. The Charioteers shot back at the Elves and while their fire was not as accurate, one of the Storm Wind units got wavered.

Elves slowed down the advance in order to be able to shoot again. This time Elves had to divide their attacks and while damaged the Chariots further, it was still not enough to rout any of the massive units.

While flyin Pharaoh happily charged the Elven War Chariots, the rest of the forces on the left flank continued shooting duel. One more Elven units got wavered.

At the same time, units on the center right entered the forest and took full advantage of the good defensive position.

Elves tried to shoot down the Chariots for the third time but still could not inflict sufficient damage. One of the Storm Wind cavalry units charged in already, mainly to stop enemy advance on the flank and disrupt the shooting.

On the right flank Elven infantry pulled back while Drakon Riders re-positioned to a better, safer spot.

Elves charged again, this time with the aid of both Princes and the attack proved to be successful as first unit of Revenant Chariots perished. Unfortunately for Elves, their shooting once again was not damaging enough and second unit of the Chariots was still a threat.

Elves made a few mistakes and now the counter attacks resulted in more losses. On both flanks Elves lost a unit and forces of Empire of Dust army started catching up. Fortunately for Elves, Silver Breeze cavalry managed to hold the enemy chariots in place - just!

After all the shooting and maneuvering it was finally time for Elves to fight back. Using the opportunity, the units on the left flank executed combined charge against the weakened Revenant Chariots and routed them.

Next, all the Drakon Riders coordinated the charge against Revenant infantry and inflicted substantial damage. The Revenents held but it looked like the help was a bit far away.

The units on the right flank continued their attacks and troop of Palace Guard was destroyed. However, more important action took place in the center. Revenants counter-charged the Drakon Riders but only wavered them. To make things worse for the undead army, the magic animating huge Bone Giant failed and the massive construct did not reach Elven Drakon Lord at all!

Elves mounted a second wave attack and this time Revenants were routed completely. In addition, swift Elven fast cavalry outmaneuvered the enemy and Elves took control over the center of the battle field.

To make sure that control is maintained, no less but three Elven heroes rushed to block the Pharaoh on the Chariot from entering the fight!

Cursed Priests mustered whatever power they could to swing the balance of the battle into their favor. This time the Bone Giant was animated properly but the Drakon Lord held his ground. Nearby Drakon Riders suffered badly due to coordinated attack of Pharaoh and Bone Dragon but they too managed to hold!

In the end, Elves maintained the control over the battle field and forced their enemies to withdraw.

Many thanks to Ed for a great game! It was really good to play against each other again, especially with armies that are so different from each other.

It was very unfortunate for Ed when some of his actions did not bring the expected results. Flying Pharaoh could not rout the Chariots, his Chariots failed to rout Silver Breeze cavalry and in particular, the Bone Giant was not surged into a fight. Ed needed only 2 successes on his 10 dice for Surge and got only 1 4+ roll!

From my own point of view, I was really concerned it takes me long to shoot down chariots and in the end I routed them in melee instead. The good thing, however, was that my units that are not necessarily considered as useful, such as Sea Guard or Silver Breeze, did very well and showed their flexibility. Not only they inflicted damage with ranged attacks but finished the job in melee. What is also important, thanks to great speed and maneuverability, Silver Breeze parked in the middle of the battle field to help secure the objective of the scenario.

I am also happy with the performance of the force on the right flank, even though I made mistakes in allowing some flank charges. I kept the units close enough so that they could not be ignored and as a result it helped me to draw the enemies from the center. While they managed to come back I think they were away for one turn too long to be able to help or avenge Revenants. If I only moved Palace Guard regiment better, I would have placed them in the zone for control too.

Having said that I also need to remember that it was only because Drakon Riders and Lord held their ground that I won the game. If the game continued to 7th turn that would have also posed some problems, although I think I was in good position to have a chance to secure the draw.

Posted by Swordmaster at 22:01