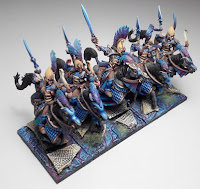 As I expected, getting regular updates on the hobby front is not that easy. :) Time tends to fly quickly and not every evening can be dedicated to the hobby. It does sound like a lame excuse but fortunately I did something last week, so it is not too bad!

I do wonder, however, how other people organize their time. Do you have a strict plan? Do you focus on one thing at a time? For me, between writing battle reports and reading them I found the amount of time left is running out fast. Hence, I tend to do the hobby (if at all) when I am not writing. If you have any suggestions how to be able to do everything at the same time I am all ears! :)

I continued with the drakons of course. But this time I wanted to catch up with some progress on the riders. I had them assembled but since I combined Cold One Knights legs with Dragon Princes torsos, some green stuff action was required.

I basically wanted to cover mesh armor with scales so that the same type of armor is on every miniature. I have not taken the pictures of that element yet because it still requires some polishing. I just hope after painting it will look acceptable. :)

I also had a look how drakons fit onto their bases. I have seen that problem on the pictures of other players, they either position only two models on the outer edges or do it vertically, by mounting the fliers on rods. I haven't made my decision yet. Two drakons for a regiment look good but I wanted to have them all there. I am just concerned that if I place them on some kind of rods they will be significantly higher than the rest of the models. But who knows, it may actually create a very nice visual effect! In addition, such arrangements may help in games where units need to be positioned base to base.

I also continued with my experiments for bases. As described earlier, I used super sculpey first to create ancient Greek mosaic and then broke it into pieces. Next, I created frozen layer on all bases and pressed broken but already cured pieces into place. Two layers are still visibly separated but I think the effect is better.

I also added some sand here and there and a few spots are covered with static grass. In terms of painting I used lighter colors to finish each layer so that the contrast is better. I like the effect in general, I think it will look nice with all the units and I am finally getting to the point where bases will unify the look of the army further.

I corrected the bases for Silver Breeze unit so that they look similar too. I really like these rolling pins and I have noticed that the provider keeps adding more and more patterns!

A small step in terms of progress but I am glad I made it as it keeps things going forward. One small step at a time :)

Cheers!
Posted by Swordmaster at 20:39