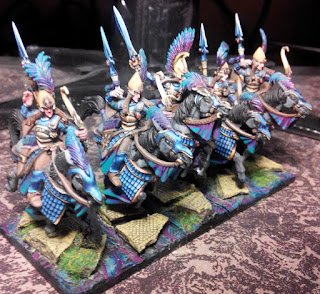 
In this situation the decision had to be made about materials I wanted to use this time. I chose Milliput for the base of "Frost":

It was my first attempt to use this material and I was learning how to use it by trial and error. Of course I also checked a few video tutorials in general. It is a very soft material but once put directly on the MDF bases I use it sticks well and does not come off when the rolling pin moves over. I tried to form a smooth surface of approximately 2 mm thickness. In addition, I formed all bases for the unit together so that when I rolled the pin over I had a continuity of the pattern. While I am using individual bases I wanted that unit effect that looks so great on multi-basing.

I let milliput get dry and then had to wait a bit for the delivery of the new rolling pin as well as Super Sculpey material.


I decided to use it for the second layer because I noticed that I cannot get all the tiny details from Greek pin imprinted in the milliput. What is more, I wanted to first have layer that is cured so that I can break it and create the effect of an abandoned or destroyed ancient civilization. A few video tutorials showed it can be done pretty well with Super Scupley so I ordered 2 boxes of test size to see if I like working with this material.

I noticed I need a thicker layer because thin one tends to stick to the rolling pin. However, I also read that Super Scupley might need to be cooled down a bit before rolling on it so next time I am going to try that method too. I was a bit concerned as it looked that after baking the pattern does not look well defined but fortunately it was ok. When I sprayed black primer the pattern was clearly there and it was easy to drybrush to make them stand out.

I used super glue to attach some broken pieces to the Frozen surface of the bases and I tried to put them in the way that is also showing they come from one, single but bigger piece that got broken and separated over time.

Now I had a few ideas to paint the bases but decided to test the simple method. First, I painted Frozen parts with purple color. Then I did some drybrushing with blues over the "ice" part. Next I painted the cracks wit purple again. My aim was to create an effect of some sort of "magical ice" that could suggest some kind of magical disaster to the ancient city.

The mosaic pieces were first painted with a brown color then heavily drybrushed with light brown/yellow.  I went for a simple and single color drybrush to obtain a dirty effect of the long forgotten place.

Last element was to add some static grass and to fix the miniatures. In this case I used my already painted Silver Breeze cavalry, that I initially attached to the resin bases. Here are the pictures quickly taken after that:

I must say I really enjoyed creating my own bases. Textured pins are simply great and I hope there will be more designs coming to increase a variety in an already very nice offer. In general, I think they turned out not too bad for the first time. However, I have learned a few things and here is what I will try to do with the next unit:

1. Create the mosaic layer first and have it ready to break into pieces.
2. Create magic "ice" layer and while it is still soft, put mosaic pieces in it. This way mosaic elements will blend in and stick better as a whole.
3. Spend more time on the mosaic and try to create a bit of different shades with browns, reds and light browns/yellows. This is to create an even nicer visual effect even from a few feet away, as it is usually the case with miniatures on the battle field.

I am lookin forward to creating more bases now and the next unit I will be working on is a regiment of Drakons.

I will of course do my best to take some better quality pictures too!

I hope you enjoyed the article and I am sure there are many things I can improve so let me know about your methods!

Cheers!
Posted by Swordmaster at 20:20