I had two games against Skaven recently but I will present the report from the second one only. In the first things went quite well, didn't even lose a unit until turn 4 while my opponent suffered some considerable casualties. In turn 4 we had a rule issue and ... my opponent rage quit. Never happened to me before ... Unfortunately, it does not feel right to write a report from such a game. A shame it ended like that as I had some spectacular moments in it and I think there would have been some interesting finale to the struggle. Ah well ...

Fortunately, Eastern Barbarian aka Wardancer, with whom I planned to play for quite a long time (and who was featured in my reports many times) stepped in and he also decided to field Skaven. Being true to his style, he brought and army totally different to what I have seen so far. (Please, take into account we played 2500 points as well as EB trying to get good score under Swedish Comp).

As you can see quite an aggressive and combat orientated force. 2 abominations are already something everybody should be concerned with so I was happy to bring Sisters, Banner of Eternal Flame and flaming magic missiles. In addition, Brood Horror is essentially Abomination mount that does not move randomly. So, 3 A-boms to deal with! :)

Next, huge unit of unbreakable Plague Monks with Plague Furnace. I knew from my previous game that it might be good idea to shoot at it with all I had (I shot down Screaming Bell to pieces then!) but the challenge lied in the fact I would have many other targets to shoot. I decided then I will focus on Abominations and try to kill as many as possible while the furnace will have to wait and will be diverted.

4 units of ranked infantry with 2 weapon teams could not be ignored either. They could help the more killy elements by providing rank bonus (although against my tiny units it might not be so necessary) or block the surrounding units from combining their efforts in outflanking the enemy. In fact, they could go into one-on-one fights too and expect to stay there for some time without support as well as inflict some casualties in the process.

The army obviously lacks typical shooting and magic Skaven armies are known for. However, 2 units of gutter runners will be a problem and even at level 2, with correct spells like Plague, the Priest can be a dangerous element of the Skaven army.

I took almost identical army as before, with one more fast cavalry:

My general plan was to deploy further away, inflict as much damage as possible with flaming ranged attacks and engage in combat with elements I hoped to defeat. E.g. infantry blocks or wounded abominations, especially if attacked by Dragon Princess with banner and Swordmasters to use the initiative order to my advantage. Dragon Princess would inflict a flaming wound while Swordmasters would follow with theirs soon after. 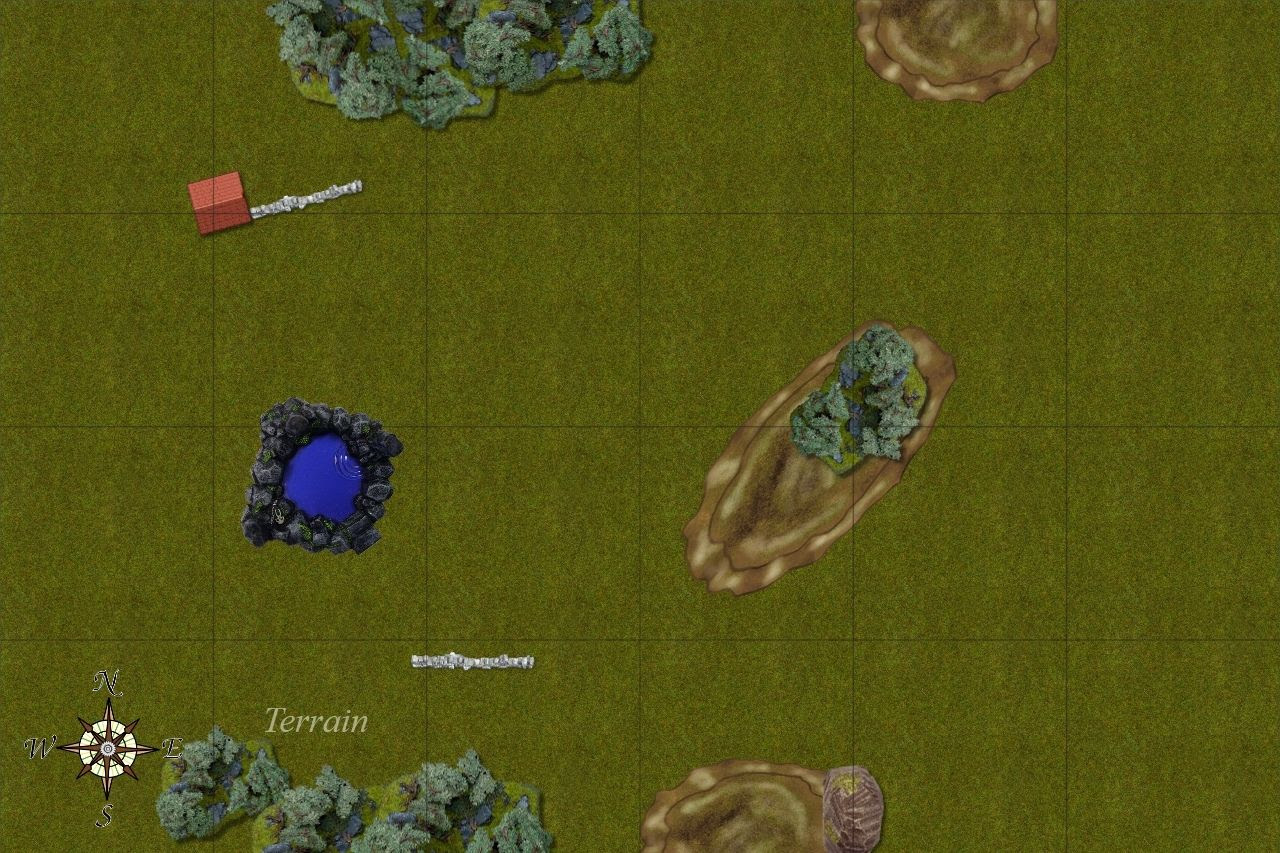 The hills were blocking line of sight so that longer one in the middle would be a good cover. The fences were hard cover and the building was just small cottage with a single level. Forrests were mysterious and the blue hole on the battle field was dangerous terrain (the map was actually called 'Hole in the Ground' :)).

EB won the roll off so Skaven moved forward without any delay!

Skaven - Turn 1
Skaven moved forward as fast as possible. The abomination on the left flank was kind of lazy but the one on the right was more than eager to move forward. Plague Priest started to brew his deadly fumes when something went horribly wrong. Not only he could not resist the huge magical feedback but it resulted in a detonation of cataclysmic proportion and his own untimely demise. Magicless Skaven started to wave their rag-tag banners feverishly and somehow the huge storm started to build over the battlefield.

Fast reavers pulled back and majority of the forces remained in their positions. Partially because of the storm raging over the battlefield that already affected the accuracy of the shooting. However, Larry the Loremaster decided to shed some light in that darkness. Although his Fireball was consumed by the evil energies they could not stop the spell of pure light and one of the abominations roared in pain when it was hurt by a burning gaze. Sisters picked up after him and their flaming arrows sailed through the storm and finished off the beast from hell! (Edit: As they didn't move they were hitting on 5+ and wounding on 5+ and I managed to score 2 wounds)

Skaven turned towards the more juicy Elven center and kept pressing forward. Gutter Runners made their way towards the battle but their usually deadly throwing stars didn't hit that many targets due to raging storm. One of the Warlords urged his Rat Ogre mount to the left flank while Abomination moved super fast towards elven regiments on the hill.

The storm disappears as quickly and abruptly as it started and Elven army had now a clear view at the horrors that were running towards them. Veterans of the countless battles were not to be shaken easily though and they took advantage of the clear weather that didn't affect the accuracy of their shooting. Sisters led the way and their flaming arrows deeply wounded the Broodhorror. The volley from one of the Eagle Claws was all that was needed to finish it off! (Edit: Both units were hitting on 3+. After randomization of hits Sisters wounded 3 times and Eagle Claw inflicted 4w. Seems like S4 against T5 can be deadly.).

With one of the main targets gone Archers and the other Eagle Claw aimed at damaged Furnace. Without Plague Priest it was now even more vulnerable and that device was also ruined by elven arrows and bolts. They expertly hit vulnerable joints and the Furnace collapsed under its own weight (Edit: I was lucky to get three 6's to wound the Furnace with the Archers who hit 12 times. Then Eagle Claw got that lucky 6 too to finish it.)

On the right flank Dragon Princes, trusting in the fiery power of their banner, charged the Abomination. Unfortunately, its thick skin was too hard to pierce and only a single wound was inflicted. Abomination flailed back and thanks to Dragon Armor only 3 knights fell down. They barely won the combat but stubborn abomination didn't move anywhere.

Despite heavy losses Skaven haven't given up yet. They attacked blocking eagles and used the momentum to cover more distance towards the Elves. Slaves were dispatched to pin down Elven heavy cavalry. Gutter runners destroyed Reavers that blocked their path to more vulnerable war machines.

Surprisingly, though, the last Dragon Prince was waving his flag proudly against hulking abomination! (Edit: A-bom inflicted 6 wounds, I saved 4 with 5+ armor and 1 more with 6++ ward!)

Elves decided it is time to get close and personal. Archers on the left flank charged gutter runners who had to hold or flee the battle. They were still killed by super swift Archers. Their companions on the right flank joined Swordmasters and their BSB in the all out attack at Stormvermin and enemy BSB. Larry the Loremaster further aided his troops by slowing Stormvermin and freezing their limbs. Elite vermin stood no chance to such an attack and many of them lied dead before the survivors could hit back. The remaining few turned their tails and fled, chased by Swordmasters.

Abomination got crazy and charged in the random direction but it still hit Swordmasters and simply wiped them out (Edit: EB rolled triple 6! Please, note, that reavers where there to get one for the team as we don't acknowledge rail-roading as valid move.) Crazy monks, although heavily depleted charged Sisters who ... held! And didn't even take that many casualties! On the left flank Warlord easily killed lone reaver but he didn't make it to the Eagle Claw with his overrun.

Dragon princes leveled their lances and charged at Stormvermin who surprisingly turned their tails and fled. But not far enough to avoid elven knights and yet another unit was wiped out.

Larry the Loremaster summoned irresistible fireballs and wounded Abomination further. The shooters picked up and the beast was left barely breathing. It was a matter of time before it was finished.

The last remaining Warlord of the Skaven army decided to leave the battle field. There was not much left from the mighty army but as old verminous wisdom says "the one who flees today, lives to fight tomorrow". Besides, it was a great opportunity to blame now dead clan leader for the incompetence and disaster and claim his mantle unopposed.

I must admit I didn't expect that I would be able to inflict such heavy damage in such a short time. Early cascade was a big blow for EB as he lost his only spell caster, it was easier to get wounds against his Furnace and he wiped out half of his unit for me. We discussed the game afterwards, obviously, and EB said that when looking back at the battle he probably switched on Storm Banner too early. That turn when he did I was still at long distance with my shooters and majority of the targets were not even visible. On the other hand his Gutter Runners suffered from additional -2 to hit and didn't wipe out blocking reavers. What's more, Storm Banner run out of power when he needed him the most. Losing one Abomination was acceptable but losing Broodhorror and Furnace in the same turn, before they could even attempt any charges, was heavy blow.

I think that positioning both Abomination and Broodhorror in the center was still unnecessary. If he moved more to the right the hill would have provided some shelter. He would put me in a difficult situation. To deploy units in the opposite corner but without chance to damage him for 1-2 turns (and still facing Storm Banner) or to deploy some regiments directly opposite where he could reach them much faster.

I had some more than average rolls again (it was the case in the game I mentioned before, where by turn 4 I didn't lose a unit yet but got 2 cannons, Stormfiends, Screaming Bell and Warlord on Rat Ogre) that definitely helped. But at the same time the combined charge of Archers, Swordmasters and BSB showed I had some considerable fighting abilities, especially when supported by magic.

I am sorry the luck was not on EB's side this time but I am sure he is plotting his revenge as we speak and we might have a chance for a re-match. He showed many times (check his double Wyvern or Empire games) that he learns quickly from his mistakes and can win with his unique armies despite initial defeats.

I hope you enjoyed the report and thanks for reading!
Posted by Swordmaster at 01:24