Ellyrian Reavers with Scale75 - WiP and back to painting

I hope to get back to painting, despite some lack of motivation in the meantime due to big unknowns of Warhammer future. That was really tough for many people, should they continue with their projects or not? I decided to do so, even if it is just for the sake of completeness.

I was looking for improvements to my style and painting skills and simply wanted to continue with replacing old miniatures that still had metallic paints on them so that I can have a cohesive look of the army. I haven't finished Sisters of Avelorn yet as I started using the armies without them but I will come back to them to simply finish the unit. I added extra work with pinning the models. I had an accident long time ago with plastic White Lions that broke to pieces. I wanted to prevent that. I also bought some nice resin bases I intend to use although with new rumors about possibility of big changes in that department it seems a little bit difficult to commit.

However, I decided that I am going to finish a couple of units anyway. If 9th edition is different, then I will have nicely painted models. If we can still use the armies we have then I will have them ready.

Another important addition was a selection of painting sets produced by Scale75. These paints were recommended to my by master painter Volomir. I sent him some pictures and he was very kind to reply and give me his advice. I accepted the criticism and bought 2 sets of metallic paints (Alchemy series), two sets of NMM paints (gold and silver) and set of inks.

The paints seem to be quite thick (mat colors) so require proper mixing (I got a small "blender" tool for that) and you need to make sure they are well diluted. Volomir suggested I get back to metallic colors as unfortunately the way I highlight is not the correct one (if one aims to create realistic reflections). I did try them but while they are good colors I noticed I would need to get back to square one and learn painting metallic colors from scratch. What is more, I didn't like the effect I am achieving. It is not that they don't look good, they do! It is just the fact I prefer this more cartoony feel you get with NMM colors even if they are not applied perfectly.

I also enjoy layering them much more than metallic colors and I decided to to stick to these.

Just a note on ordering. I contacted Scale75 about it as my friend was interested in purchasing their mega set. The problem was that they offered only regular post shipment and I felt it was not secure enough to do so when you want to send it to Australia. The cost was huge too. It took me some time to dig out the information from their website and I must regretfully say that their customer service is not that helpful. Because of that my friend decided not to purchase these paints and I ordered my sets through Hangar18 instead. They were absolutely amazing, replying in 12 hours (and probably only due to time difference) and in the end I actually paid less for the whole transaction as Hangar18 offered good shipping price with insurance included. What is more, when it happened that they forgot to put one of the sets in the package and I had it delivered in a week at no extra cost!

It is a shame then that such a fantastic producer has such a poor customer service.

Ok, apart from the fact I wanted to improve my technique I also wanted to use the advice I got some time ago from Ana - Painting Mum - another proficient painter. I was interested what to do to keep my gold-blue scheme and create better contrasts between areas that are bluish but are not of the same type, such as clothes and scale armor for example. She suggested that I add warm colors for clothes and cold for armor which I did! I even used purples, reds and greens on clothes to create nice blending in between. I tested that on Sisters and their cloaks and was very happy with the results.

Ok, here are some WiP of Ellyrian Reaver, poor quality pictures unfortunately that seem to be a little pale in comparison to reality. But I really enjoyed painting sessions and I hope to be able to continue regularly. 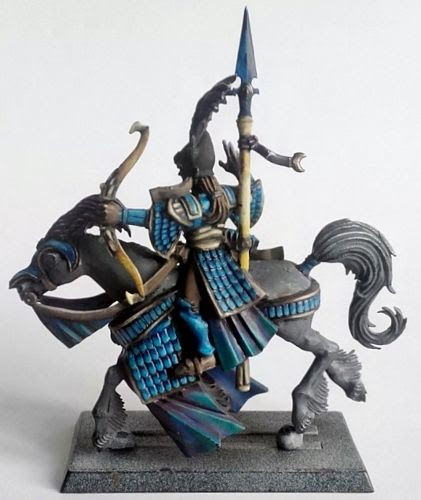 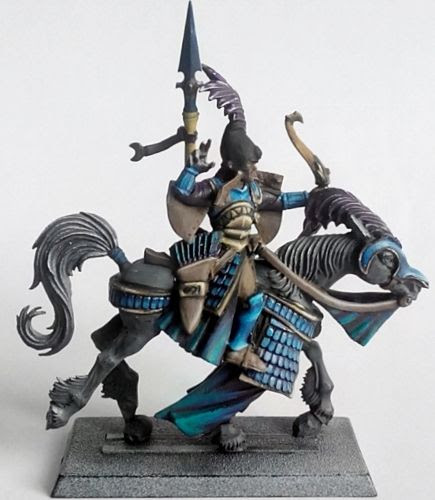 The contrast I talked about is not great here but hopefully with better pictures I will be able to show that.

Cheers!
Posted by Swordmaster at 23:29