Outcasts vs. Monsters of Chaos

With the recent release of Warrior of Chaos army book a lot of players were eager to test their new ideas and check new options available for them. Wardancer aka Eastern Barbarian also wanted to do so and I was more than happy to line up a thin blue line of High Elven warriors to test his new army.

Always unorthodox with his approach and great Swedish Comp fan, he came up with an idea of a Monster of Chaos army. I don't remember all the details (hopefully Wardancer will help me out later on) but that was his 2500 list:


Very fast, very durable army. Even if you have flaming attacks it is probably on a single regiment and with so many trolls out there it is hard to be everywhere. What is more, a single unit of 10 Lions is bound to take casualties anyway.

I was in particular concerned with Daemon Prince. I decided I will focus on the rest of the army and try not to give him too many opportunities to attack and pursuit into fresh target. However, I have found out that it didn't have dragon helm nor dragonbane gem so I also wanted to try and inflict some damage with metal magic.

In general that army is well protected from my shooting but a few units, such as Giant or Dragon Ogres might suffer from focused fire. The problem was it is very well known so I didn't expect them to be that exposed.

Chimera and BSB on Juggernaut were threats in themselves and I had to treat them as units. They were also a good target for metal magic spells as well as eagle claw so I wanted to use that opportunity to weaken them before the combat.

The main challenge was that I actually had too many threats to deal with and not much time to maneuver as this army is incredibly fast. The presence of Throgg also meant Trolls would behave and that was solid battle line as they are also immune to psychology.


I really should expect a refused flank deployment from my opponents. It was shown before that one way to defeat my own force is to weight heavily on one flank and charge swiftly to overwhelm my forces and deny me the chance to re-group and support from the units on the other flank. It is definitely time to design some counter measures!

I was very unhappy with my own deployment. I immediately saw the danger of being overwhelmed on the Eastern flank and I had no room to maneuver there either. As a quick counter I decided to pull back to make the chances of second turn charges smaller. But I was doubtful if that were enough.

To my horror I have noticed that the file I prepared with the chat we had on UB is incomplete and I have no idea what spells Daemon Prince got, apart from Rancid Visitations.  :(

Not surprisingly I lost the roll for the first turn and I watched as Monsters moved towards my lines at a double. 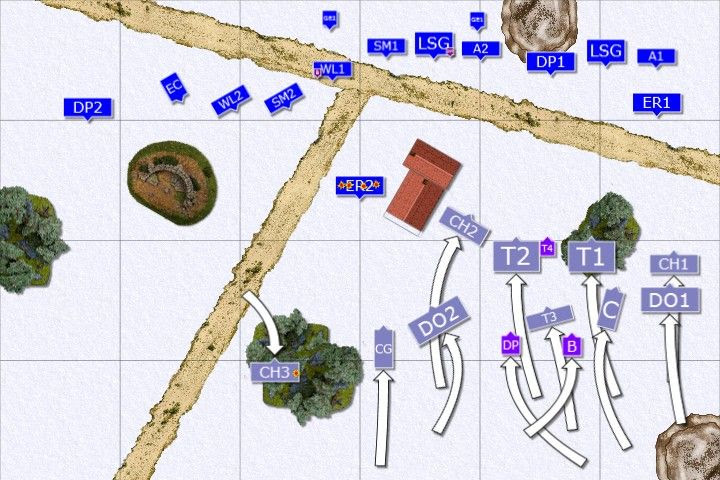 The army of Monsters didn't wait long for the order to run towards the elven lines. Their daemonic general didn't want to keep them in check for too long before their enthusiasm would force them to attack each other. At the moment they were focused on the enemy and deep snow was not an obstacle for them at all.

Elves observed the horde of monsters with stoicism, even when their scouting squadron of light cavalry was targeted by evil spell and only a single survivor remained to keep enemy movements in check. (Edit: I think DP gained a wound and toughness due to lore attribute here)

Elven units on the West moved fast to encircle the enemy while Eastern flank pulled back to increased the distance from the enemy. Thus giving more time for their companions to join the battle.

Shooting focused on chaos hounds, to clear the enemy fast units, able to interfere with maneuvers of the elven army.

Monstrous army didn't slow down and only single group of trolls and a giant were ordered to guard the rear of advancing horde. It was clear Western elven units will be too late to aid the Eastern flank.

Dragon Princes and Sea guard charged as one against trolls. Lances and spears hit home but infamous abilities to regenerate wounds by trolls in a blink of an eye prevailed and elves lost combat badly. The attackers were pushed back and trolls pursued disorganized elves.

Western units doubled their efforts to be ready at least to counter attack and avenge fallen comrades. Archmage was the first to bring some pain to the enemy forces. His focus was undisturbed by the daemon prince and powerful spell was cast. Daemonic general howled with rage and only thanks to his master protection he survived that barrage (Edit: I inflicted 4 wounds with Searing Doom but DP was still alive thanks to the extra wound from previous magic phase).

Monsters of Chaos finally attacked too. Reavers and Archers were forced to withdraw as their futile resistance would help the enemy to keep up the momentum. Another archer unit was charged by trolls led by throgg himself and were destroyed. Thus entire Eastern flank of the elven army ceased to exist.

Despite the heavy blow and the loss of several regiments at once, High Elves do not give up. Their heavy hitters are all intact and even more eager to enact vengeance. But they are not reckless and approach with a newly formulated plan.

The counter attack was to come from the South, were the enemy was the weakest. Dragon Princes and White Lions prepared a trap for a giant and eagles swooped down to cause confusion. Swordmasters with the Archmage entered the central building for better battle field control and the rest of the units re-grouped the form the new line on the North-South axis.


BSB of the monstrous army decided it is time for him to earn some glory and charged sea guard. Elves decided to hold but when it was clear daemonic prince is about to charge they started to have some doubts (Edit: I think they actually faced South so a little mistake on the diagram, sorry!). But then, Throgg also wanted to taste some delicate elven flesh and recklessly charged on his own. This time Elves knew they stand no chance and retreated. That left the leaders of the monstrous army dangerously exposed.

On the South giant stormed White Lions who wounded it badly but didn't kill it and suffered many casualties. They stubbornly held, knowing cavalry will come to their aid any second.

Dragon Princes spurred their horses and charged the wounded giant before it had a chance to swing again and killed it outright.

Finally the Archmage repeated his fit and this time Daemon Prince was banished from the existence.

The only leader of the chaotic army manages to order a few of the groups to keep attacking. Chimera aids trolls but White Lions prevail and repel their attackers. Nearby second group of trolls are totally confused without their king and even the flight of their brethren does not impress them.

Dragon Ogres smell an easy victory and attack great eagle but noble bird of pray manages to avoid heavy blows. Dragon Ogres are stopped, at least for a while.

BSB, seeing as the army is in disarray tries to break through fighting. But Swordmasters fight well and they stop their enemy.

Chimera and Trolls fail to rally due to lack of any meaningful character and his inspiring presence. Another group of trolls remains confused despite the enemy very close.

Only Dragon Ogres are disciplined enough to rally.

Elven BSB chases trolls and chimera off the battle field. Second unit of Swordmasters charges exposed flank of the enemy bsb and kill him without mercy. Even the dragon ogre finally dies in combat. Unfortunately the charge does not help to save companions from the first regiment.

By a miracle, high elves manage to repel the army of monsters but the price in blood was very high!

After the charge in turn 3 and a collapse of entire flank I thought I am done. I only hoped that my archmage can hunt down daemon prince. The fact I kept Swordmasters, White Lions and single unit of heavy cavalry intact gave me chances to hit back but I was sure I have already lost the game.

The charge with Throgg was all that turned the tables. I think it was totally unnecessary but sometimes players tend to get bloodthirsty and I think that is what happened.

After losing DP and Throgg there was no one to lead the army and not surprisingly trolls started to fail their stupidity tests. That helped a lot as White Lions could not handle another unit on their own. It was actually quite lucky they survived the counter attack by Chimera.

Which is a shame as I think wardancer played a better game until that mistake with Throgg. He had a far better deployment, used his army well and limited the strength of mine. On the other hand I deployed poorly and lost many units due to that. Fortunately I didn't lose any of the heavy hitters so I had some power to hit back.

Thanks for reading!
Posted by Swordmaster at 19:02