This year I had another great opportunity to attend CanCon, probably the biggest gaming event in Australia. 3 days of various gaming activities held in 3 huge halls attracted a lot of attention. Some people came to watch, some to take part in participation games from various systems, some took part in tournaments and many came simply to buy new things.

This time I was not complete stranger and it was great to meet people I played against during various tournaments last year. I also was looking forward to meeting new players. This year CanCon attracted almost 100 players from different states. I guess Warhammers is not dead in Oz! :)

Similarly as a year ago we had a chance to play various scenarios and I must admit that it adds a new dimension to the game for sure. In general the scenarios were as per rulebook with a few additions which I am going to explain later when posting the report from particular game. Only watchtower was not played this time. In addition to battle points (0-160) one could earn points for sport (simple answer yes/no to 5 questions saw that done), painting (awarded by referees) and composition (up to 40 in total). Unlike last year comp (which was reduced by half in comparison to last year) was added once at the end of tournament. Hence pairs were determined only by the battle points.

In my first game I faced James and his Dwarves. I met James at WinterCon and then we played Battle for the Pass with a modification (objectives gave extra points). I managed to snatch a victory back then what was noted in the appropriate chapter of Book of Grudges. Just before CanCon it turned out that grudges could be issued for turn 1 and true to the form we challenged each other to play one more episode of War of the Beard.

James wanted to get more composition points and prior to the tournament asked people at wargamerau to rate his army list. After that he decided to bring the following force:


I must admit James was brave to come to the tournament with only two war machines. Although by many his army might seem to be soft it was not an easy one for me to win against. In particular due to the presence of the anvil. Many times careful positioning could be destroyed by Dwarven block reforming and charging thanks to the anvil. I don't have to mention legendary Dwarven magic resistance and my only hope was to use Staff of Solidity to get that one important spell through.

I also had to be careful with movement phase as with Miners appearing at any time and ability to charge them the same turn, I could accidentally expose the flank to some nasty attack.


Dwarves deployed at the center with Thunderers occupying the tower and anvil just behind it while High Elves deployed wide. I wanted to get to his artillery as soon as possible. I also knew his thunderers are dangerous to my small units but since they deployed in the tower I could not shoot at them. In that case I decided I will target the gyrocopter if possible. I hid eagle claw from the cannon too. Other than that I wanted to use my usual envelopment approach to isolate and destroy Dwarven units with multiple charges. Since I had Vaul's Unmaking I wanted to cast as many dice as possible to get Irresistible Force and destroy the banner with the rune that gives nearby regiments 5+ ward save against shooting. After that thinning down Dwarven regiments should be much easier although not easy owing to their high toughness.

Dwarves won the roll off and had the first turn.

Dwarves didn't rush to meet elves. Thuderers waited patiently for them to come into range. Runelord practiced some strokes on the anvil and one of the eagles suddenly had to stay on the ground as some chicken. Cannon crew aimed at the Archmage but one of his bodyguards pushed him away before the cannonball could hit him. Finally grudgethrower crew spotted their counterparts and with a single, well aimed boulder destroyed fragile elven war machine.

Elves advance, with regiments on the flanks gaining momentum while shooters at the center moved in to be in range. Magic was disappointingly weak due to almost non existent winds and the Archmage didn't even bother casting spells (Edit: I rolled double 1's and ended up with a single dice against 5 I think :)).

Despite the loss of eagle claw Elves still had considerable firepower and all aimed at the gyrocopter knowing how annoying it can be. Well placed shots destroyed vital connections and with steam leaking through many holes in the engine, Dwarven flyer crashed to the ground.

With elven cavalry very close to the cannon warriors and dragon slayer move in to position themselves in between. Runelord decided to urge his warriors to attack elven knights but the rune he struck didn't work.

Thunderers and grudgethrower aimed at the Eastern unit of White Lions killing half of the regiment but survivors pushed forward anyway. Finally, the cannon once again tried to snipe the Archmage and once again another elf saved his life.

Heavy cavalry on the Western flank charges lone figure and Dragon Slayer can finally meet his ancestors. Elves overrun into nearby cannon. The knights on the East decided to assault the tower but it was clear that they were too arrogant to charge well defended position and were pushed back with casualties.

The Archmage used the power of his stuff and channeled enough energy to break through seemingly impregnable Dwarven defenses. Their magical banner, offering the protection from missiles, lost its power. Soon storm of arrows followed and hammerers died.

With Miners arrival Dwarves were more aggressive. The miners decided to attack small unit of archers with the Archmage but elves performed tactical retreat. Despite that Miners were determined to catch their chosen foe and didn't redirect their attack.

Thunderers finished arrogant knights while grudgethrower reduced the number of light cavalry to two riders. Cannon crew had no chance against heavy cavalry and elven knights reformed to charge another war machine.

Dragon Princes charge the grudge thrower and destroy the crew. In the meantime Swordmasters and Lion march forward to surround isolated warriors. Great eagles swoop down to block another two infantry units so that the shooters could turn around and all aim at the miners. Many dwarves died but the survivors were too determined to flee.

White Lions on the East attempted to charge the anvil but they didn't reach it in time (Edit: in their last chance to attack the anvil they had to get double 6 to make it. I rolled 11 :D)

The warriors turned about to face elven cavalry and stood ready for the signal from the Runelord but instead of a clean and vibrant sound they hear devastating eruption. It could mean only one thing and the warriors muttered their prayers.

Another warrior unit and hammerers chased down the eagles, catching one. Thunderers then destroyed remaining lions, rampaging nearby. Finally, miners charged sea guard and both units were locked in mortal combat. 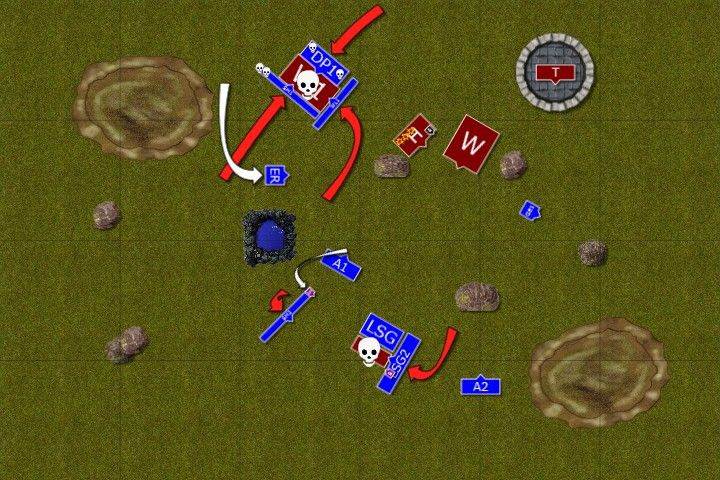 Three hard hitting regiments of the elven army attack dwarven warriors from all sides. Dwarves try to fight back but even they cannot withstand such onslaught and remaining few flee. Elven cavalry chases and cuts them down. Lions become bloodthirsty and rush after fleeing enemy as well.

On the South BSB leads the sea guard to help their companions and manage to destroy the miners before assistance of Swordmasters is needed.

Warriors attempt to attack Archers and Sea Guard but both regiments retreat. Thunderers aim to kill the eagle but their bullets fly wide and the great bird is still alive.

Outcasts - Turn 5
Elven troops redress their ranks to get ready for another attack. Limited shooting does not harm Dwarves much but in battle every wound counts. The wounded eagle, knowing it is not going to make it, turns back and swoops down to hold the Dwarves for a little longer so that elven troops can catch them.

Dwarves - Turn 6
There is not much for Dwarves to do now. They just hold their position and finish off the eagle. Thunders aim at Dragon Princes and kill all but one, who holds his ground.

White Lions charged both regiments, one at a time, but surprisingly Dwarves withdrew to the safety of the rocky terrain. Archmage and all archers tried to destroy hammerers but 2 and BSB were still standing, protecting their battle banner at all cost.

Despite that it was clear that High Elves carried the day.

The battle might have looked one-sided but you need to take into account Jame's bad luck. First, his anvil didn't work when he tried to intercept my cavalry thus leaving the road open to his cannon. Second, his anvil exploded when he could break through from encirclement. It not only gave me a lot of points but left the warriors at the mercy of three hardest hitting regiments of my army. No wonder they broke shortly after. Also miners failed to re-direct their charge against sea guard and had to face the wrath of elven shooters to be finished in close combat by sea guard.

We had a short discussion about what James could do differently. I think, looking at diagrams, that he could deploy on the East, with two units on the Eastern side and one on the Western side of the tower. Not to castle, as I could still mount a frontal assault but to advance on the East and turn it into Battle for the Pass. With miners arriving at some stage he could either charge some units from the rear or reinforce his units from the North. Also, putting gyrocopter in the range of bows was a mistake.

I was of course happy with the outcome but I could do a few things better. My obvious mistake was to charge the building. Somehow I thought the knights can still do some damage but they completely fluffed their attacks and lost some in due to stand and shoot. I think moving them around the tower to threaten the anvil would help one of the units to actually get there.

I also should have moved Swordmasters closer to the center (the unit left at the back) as sea guard and archers would have been sufficient to deal with miners on their own. Instead, they were too late to charge warriors or hammerers in the last turn.

Also positioning Reavers so that they could not move (rocks were impassable) was stupid as they could not chase fleeing troops, thus denying me the chance to catch them.

Still, 15-5 win was more than I expected to get from that game and I was happy to get that.

I would like to thank James for great game and encourage him to keep experimenting with the army lists as well as with different tactics. My army can be beaten :)

Cheers!
Posted by Swordmaster at 16:23