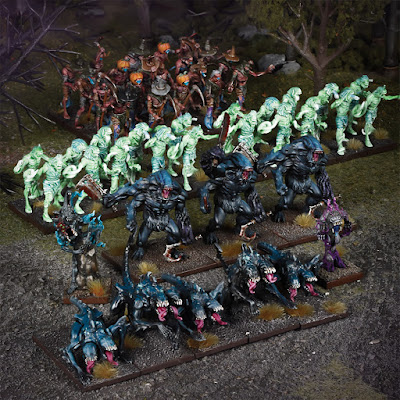 This is a versatile force with a very nice selection of units (11 of them total with combined unit strength of 23). A lot of units cannot be wavered, which makes for a very reliable army, that will move forward no matter what.

Especially Butchers and Shadow-hulk seem to be very tough to deal with but Terror and Void Lurker can also regenerate any damage done to them, nicely balancing the fact they have less protection.

My personal favourite is the regiment of Soulfliers as I think the Windblast on this unit is going to be very good option. I also noted a regiment of Shadownhounds that I have never had a chance to play against. I am sure it will be an interesting match up with them against my other fast elements in the army.

In fact, both armies have quite a number of fast elements so gaining "air superiority", so to speak, may be quite crucial for the outcome of this battle.

The main difference, perhaps, between both forces is that there is no shooting represented in this army but I think it is compensated by the fact many units cannot be wavered and that they have either good defence or regeneration to help dish out the damage.

My initial plan was thus to try and win the fight on the flanks with fast units, inflict some damage with shooting (despite Stealth special rule that is going to limit the efficiency for sure) and hold the centre for long enough for the outflanking units to come and help in the inevitable melee.

I used exactly the same army as I played with during CanCon and here are the details:

In this game we got Pillage as a scenario with maximum amount of tokens. Erasmus won the roll off and started placing his tokens first. What was interesting was that he started placing his tokens in on the middle line, while I was placing mine at the bottom of the battle field. Despite the fact we did not know at the time which side we are going to deploy our respective armies!

In the end, I placed my 3 tokens at the bottom, while Erasmus placed his 4 on the upper half of the battle field.

If you thought that my initial intention was to deploy at the bottom, defend the 3 tokes there and get at least 4th one somewhere else, then you would be correct. That was indeed my intention. But when I saw the placement of the tokens and won the roll off to choose the sides, I changed the plan!

The new idea was that I would still need to fight but I can potentially do so while denying the access to 4 tokens in the upper half. And if successful on the flanks, I could also get some of those. What is more important, however, is that with the 3 tokens in the back field I would force Erasmus to either leave some units behind (and thus opening more space on flanks for me to attack) or abandon the tokens places there.

Let's see if I managed to do it! Erasmus won the roll off to choose first turn and decided to go second.

Elves knew they had to put some pressure early on and moved swiftly around the flanks. Drakon Lords in particular moved fast. The one on the left flank tempting the enemy Soulfliers to  attack him.

The rest of the army attempted to inflict the damage with shooting but it was not yet possible to focus the fire on a single target and the effect was not great.

The very solid centre of the Night Stalkers army moved forward but kept the distance from the Storm Wind cavalry and did not approach Elves at full speed.

And while the units on the right adjusted positions to keep the Elven flying cavalry in their respective fronts, the Soulfliers on the left attacked! Dread-fiend moved forward to help while Void Lurker was  bit shy and did not move into Drakon Riders charge range just yet.

Elves attacked early. On the left flank, Drakon Riders and Drakon Lord joined forces and defeated enemy flying cavalry. In the middle, Forest Shamblers attacked to slow down the centre of the Night Stalker's army while the shooters focused on the other Butchers. Unfortunately for Elves, not much damage was done. And last but not least, Drakon Lord on the right flank intercepted the Hounds so that Drakon Riders manoeuvred into favourable position.

Void Lurker could not ignore the threat and attacked Drakon Riders on the left flank while Dread Fiend sped forward to block Forest Shamblers from joining the fight.

Shadow-hulk, Terror and Butchers all moved forward but at a quite slow pace, just entering the forest. They kept out of range of Palace Guard but Storm Wind cavalry was still a threat.

Second group of Butchers defeated the Shamblers and reformed while Shadowhunds begun their fight with the Drakon Lord.

Elves decided to attack as the shooting did not do much damage. Both Silver Breeze units engaged, one to block the enemy Titans and allowing Storm Wind to defeat the Butchers while the other joined Palace Guard and Drakon Riders in the melee against the second horde. This group refused to yield, however, and three Elven units remained engaged in a fight.

While the Drakon Lord on the right flank kept the hounds occupied, the other one, on the opposite, left flank, moved to a position to threaten enemy units in the middle of the battle field.

More units joined the fight. Void Lurker finally defeated Drakon Riders and Silver Breeze cavalry was no match for two Titans either. Dopplegangers, however, did not do much damage against Elven cavalry and remaining Butchers failed to defeat Palace Guard either!

However, remaining enemy units were still in good shape and continued fighting too!

At this stage of the battle there was not much room for manoeuvring so Night Stalkers launched another frontal assault. Void Lurker claimed Drakon Lord this time but surprisingly, the rest of the Elven units held their ground!

Once again, Elves noted some important and much needed successes. Palace Guard defeated Dopplegangers while Silver Breeze allowed Storm Wind to withdraw to relative safety for time being.

Drakon Riders and second unit of Palace Guard in particular also inflicted some serious damage to their opponents.

Although Shadow-hulk, Scarecrows and Shadowhounds all continued fighting against Elven units, Void Lurker and Terror changed tactics. Void Lurker disengaged and moved back, towards the centre of Night Stalkers initial deployment zone. At the same time Terror did not attack Silver Breeze cavalry but reformed instead to force Elven units to attack it frontally.

The fight was becoming quite desperate now and Elves mustered some more strength for the final assault. Drakon Riders managed to defeat Scarecrows and took control over the token for now.

Storm Wind was not able to inflict sufficient amount of damage on the Terror and remained locked in the fight. Palace Guard nearby just used the knights as a shield now. While second unit attacked the Hulk again but this time was not able to repeat the success of the initial combat.

Elves did what they could and although they controlled majority of the objectives at this moment, the last word belonged to the Night Stalkers.

Night Stalkers used the opportunities to the fullest. First, Shadow-hulk routed Palace Guard that was not able to hold its ground this time. Also Storm Wind cavalry suffered too much damage to hold the Terror. And Drakon Riders, attacked in the flank by the Void Lurker were also defeated.

However, although Void Lurker managed to reach one of the objectives in the last possible moment, neither Shadow-hulk, nor the Terror were in position to claim any. It was thus to the nimble Shadowhounds to arrive right in time to contest the one in the middle.

After such a bloody battle, it was a draw in the end!

Many thanks to Erasmus for a fantastic battle! It was one of those that were not decided until the last possible moment and that alone made it a very interesting game!

It was a great pleasure to play against Erasmus who is a fantastic player! I am sure we will organise a re-match (hopefully soon!) and we will continue with an epic struggle between Night Stalkers and Elves.

As always, I like to take the opportunity to reflect on the battle and discuss a few situations that perhaps could have been played differently.

I usually start with the deployment and I think I could have done better. For example, while initially the idea of having Archers controlling the objective on the top right seemed good, they did not contribute to the game at all. While positioning them near the forest would have achieved the same, but would also give them ability to do a few shots at the enemy. Not much, but who knows if not enough to make a difference!

I also wonder if I should have remained more patient and use obstacles as defensive positions and keep shooting for one more turn. Perhaps even without Shamblers scouting so that Buchers would have it more difficult to hit on the charge. After all, they hit on 4+ and that would be 5+, Shamblers in particular may be good at receiving such attacks.

Next, in the turn 3 I moved my Drakon Lord on the left to threaten the middle. I kept him in 6" away from Drakons who got wavered and I was not able to combine the attack against the Lurker with two units at the same time. I think I should have moved him towards the middle more so that I could have used him to attack Dopplegangers together with Storm Wind cavalry. I think that was better option, even though I am glad I got rid of very manoeuvrable Dread Fiend.

Last but not least, second Drakon Lord should have left the melee in my turn 5. I could disengage, pivot towards the hill and move 10" to avoid Shadowhounds. That would have allowed me to attack some of the titans, including Void Lurker. Perhaps stopping it from charging Drakon Riders. They were not safe from Shadowhounds (as this unit woul have been free to reform) but would not have allowed Erasmus to push towards two objectives at the same time in turn 6.

What to you think? Were there any other situations you would have done something differently (for either army)?

Please let us know! We would love to hear from you and we hope you enjoyed our battle!

Thanks for reading!
Posted by Swordmaster at 18:35