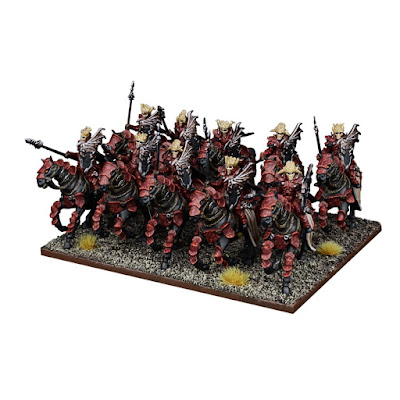 
The same elements of Simon's and Jeff's armies are Molochs, Ghouls, Abyssal Fiend, Warlocks and Manifestation of Ba'el. It seems that core of the army is indeed the same. However, Simon decided to add faster Horsemen that in the open hit as hard as Molochs and sport better armour. He also added more speed with fast interceptors such as Gargoyles or Seductress. Seductress would also play the role of individuals hunter since she has Duelist special rule and can double her attacks against such foes. While Despoiler Champion is a very reliable hero, capable of fighting alone or adding his considerable melee abilities to a bigger fight.

As a result I was facing an army that is faster but perhaps a bit less resilient due to lack of tough hordes of Lesser Abyssal Golems present in Jeff's army. But speed is what I want to rely on so having to deal with equally fast elements is also a problem for me to solve.

In general, Simon's army has 13 elements, 12 scoring and total unit strength of 21. Which makes it very similar to mine. Here are the details for comparison:

I deployed Shamblers and some fliers on the left to slow down the enemy there. Then I focused on the centre to create a break through and collect the token in the middle of the battle field. However, because I faced fast troops this time, I added Drakon Riders in the middle instead. And kept shooters close to soften up the enemy.

We got two tokens each this time so I decided to give one to each Palace Guard regiment so that they could carry them to the other side while fighting their way through. I thought I could always drop the tokens to be picked by Archers if needed.

The idea was to win on scenario by collecting one more token than Simon. ignore his unit or units carrying the tokens and move everything my troops carried to the other half of the battle field.

I won the roll off for the scenario but I decided to go second this time.


Forces of the Abyss begun their advance towards the Elven lines. Seductress used the shadow of the nearby ruined house to hide her presence.

On the opposite flank the units advanced slowly what allowed Manifestation of Ba'el to cast lightnings at the Forest Shamblers.


Elves also approached towards the enemy. On the left flank the Drakon Lord and Riders stayed close to Forest Shamblers to avoid being attacked by the enemy flying monster.

In the centre Palace Guard advanced towards the treasure but kept safe distance from the enemies. While on the centre left the Elven units tempted Abyssal Horsemen to charge early.


Abyssal Horsemen did not take the bait and Silverbreeze cavalry was shot down by Warlocks instead. Seductress was not able to see much but then spotted Drakon Riders and attacked them. The sudden charge from the flank did not do much damage but surprised flying Elven cavalry and the knights had to spend some time regaining control over their mounts.

Meanwhile, on the left flank Manifestation of Ba'el and Despoiler Champion attacked Forest Shamblers who held their ground.


While enemy flanking units were either too far or too busy, Elven units attacked in the middle. Palace Guard and Stormwind cavalry attacked Ghouls to make sure they can overwhelm them and roll the flank of the enemy formation. Second unit of Palace Guard had to drop the treasure to reach their target but Silverbreeze cavalry picked it up. Archers too joined the fight, mainly to pin down Gargoyles and block Abyssal Horsemen behind them.


Unfortunately for Elves, not everything went according to the plan. Fast Gargoyles moved away to the side and Ghouls pulled back to make room for the charge of the Abyssal Horsemen. They caught Palace Guard in the flank and elite Elven warriors were not able to hold their ground against such an attack.

That created a dent in Elven lines but they were determined to push through regardless.


Elves attacked again. It started well when Drakon Lord got rod of the Ghouls and more importantly was ready to attack the enemies from the rear. Then Archers attacked Abyssal Horsemen together with Drakon Riders but that attack was not sufficient to rout them.

What is more, Palace Guard and Stormwind were not able to rout Abyssal Fiend as the beast refused to yield despite the damage that should have been enough to topple two of them!

To add insult to injury, the Shamblers were still blocking Drakons from joining the fight and combined attack Drakon Lord and Shamblers failed to rout Molochs as well.


Forces of the Abyss naturally counter attacked but the results surprised even the evil horsemen. On the left flank battered Forest Shambles lost the fight against the flying Monster. Molochs did not give a chance of survival to the Drakon Lord who also perished.

In the centre, Palace Guard was attacked from the rear by Despoiler Champion and decimated. While Abyssal Horsemen killed Drakon Riders.

When Silverbreeze was also caught by Gargoyles, Elves not only lost more than half of the army in one go but also the treasures!


Elves attempted a few desperate attacks but they also were doomed to fail as remaining Elven troops were forced to attack individually against enemies quickly regenerating the damage.


Soon after Elves lost two more units and the remaining two, Stormwind and Drakon Riders were wavered. It was clear that Elven army would not survive this battle at all.

Many thanks to Simon for a great game, even if I was not able to put up a decent fight this time :) Simon played a fantastic game, being very patient and waiting for the right opening. He masterfully spotted one in turn 2 to make a dent in my battle line and completely disrupt my plans. Then he punched with such a force I was not able to survive, let alone to recover. Well done Simon, fantastic victory!

I would also like to thank Simon for his encouragements! As you can imagine, I was quite down after such a dramatic and quick downfall. I really appreciate that because I do not take such behaviour for granted. Thanks Simon! I do hope I will recover and we will have a proper rematch!

One can quickly assume that rolling double 1's in my turn 3 against Abyssal Fiend was simply unlucky but I prefer to see what I could have done to prevent that. And as usual, during the battle report writing I noticed a lot of mistakes that contributed to the defeat.

Then I did not anticipate that Gargoyles were able to make enough room for Horsemen to charge. What is more, they had flank charge to execute and I lost Palace Guard regiment.

After that I made another mistake of not positioning Silverbreeze and Archmage to shoot at Gargoyles and left light cavalry in arc of sight of the flying enemy. I was concerned with the attack of the Champion at Palace Guard and tried to shoot at him instead. While I had better chance to eliminate Gargoyles.

Perhaps the attack of Drakon Riders with Archers was also premature. Maybe I should have waited 1 more turn so that Horsemen would need to choose which unit to keep facing their rare, Drakon Riders or Drakon Lord.

Not to mention that there could be a better way to execute the attack in the centre. And perhaps be more patient with my manoeuvres to make sure I have the combined charges in place.

As you can see, my first battles in 3rd edition do not bring any successes as in 5 games I have played so far I lost 4 and had 1 draw. I am going to continue with this army during Australian Clash of Kings but this is going to be another set of tests. Just to see if I can come up with good ideas how to use this army better and simply collect some experience. I will simply collect the experiences from the next 6 games to see how to adapt to the new edition. Hopefully I will do better than I have done so far!

Please let me know hod did you like this battle report and post your comments on any aspect of it. I hope that despite quite one-sided game this time you still enjoyed it!

Posted by Swordmaster at 23:22