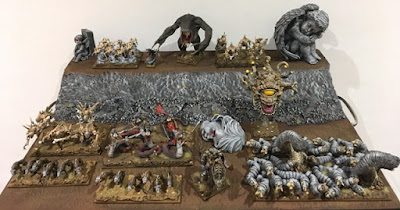 In the next round of Return of the King tournament I played against Jules and his beautifully painted Night Stalker's army. As my pictures to not give justice to his fantastic looking force, I highly recommend that you check his topic with more photos of the units he has collected and painted so far:

For this tournament Jules decided to bring an army in which various units were represented. Here are the details of his army 1850 points:

As you can see it is a versatile and flexible force with units that can play different roles. It has legion of Blood Warms that has an excellent nerve and can potentially trap even the most powerful enemy unit. It has fast and hard hitting units such as Fiends, Dread-Fiend and Void Lurker. It has some interesting Surge options with Phantoms and Scarecrows backed up by the Horror.

In total this army has 11 elements, 9 of them are scoring,for a combined unit strength of 16. My initial plan against such force would be to try and outflank this army as it is a bit slower than mine. If that is successful, then especially units with lower defence may be in trouble.

My army has 13 elements, 12 scoring units and total Unit Strength of 16. It means I have a almost the same number of units and the same combined unit strength as the army Jules used. It was thus very important to win on the flanks to be able to attack enemy units from few directions at the same time.

In this round we played Ransack as the scenario. The white objective in the centre is worth 3 points, green objectives are worth 2 (one is under the horde of Fiends) and orange ones are worth 1 point each.

I decided to deploy Forest Shamblers in front of the centre to be able to hide from many other unit due to intervening hill. As usual, fast Drakons were on the flanks. The plan was to win the flanks as initially mentioned. If I can gain "air" superiority it should give me the advantage in choosing which objective to fight for and swing the balance in my favour. Especially if I was not able to wrestle the control over the centre from the legion of Blood warms I expected to shamble towards it.

Elves advanced towards the enemy, using the hill as a cover and staying away from the charge range of the Night Stalkers. Only on the flanks Drakon Lords intentionally exposed themselves for the attacks. It was calculated risk to draw their flying enemies into a fight and then counter with the support of nearby Drakon Riders.

Night Stalkers approach the Elves at a shambling speed. Only Shadow hounds are sent forward to block Elven cavalry. And two fliers on both flanks take more decisive actions. However, although the shade hid in the shadow of the nearby terrain, the Void Lurker took the bait and attacked the Drakon Lord. Elven knight held his ground and now nearby Drakon Riders were getting ready for the counter attack!

Drakon Riders on both flanks were very active. On the left they used what seemed to be an opening and landed on the flank of the enemy formation. On the right they attacked the Void Lurker but despite significant damage, they were not yet able to defeat the monster.

In the middle the units also changed the formation. Storm Wind cavalry did not take the bait and withdrew in order to make room for Palace Guard. The elite Elven infantry routed the Shadowhounds blocking the path.

What seemed to be a safe place to land, quickly turned into a trap. Drakon Riders were intercepted by surging Phantoms and the Shade. However, they failed to even waver the Elven flying cavalry and were now in big trouble themselves.

On the opposite flank the exchange of blows continued and this time Drakon Lord was defeated by the Void Lurker. Fiends too attacked their enemies but Palace Guard held its ground - although was wavered in the process.

The fight intensified as both armies were committing more and more troops to the fight. On the left the Drakon Riders and the Lord defeated the Phantoms. When Palace Guard defeated the Scarecrows it looked like Elves started winning on that flank.

Elves took a risk and committed Forest Shamblers and Storm Wind cavalry to attack the Terror. It survived but was badly wounded. However, what was even more important, nearby Fiends were wavered due to ranged attacks. As a result the Blood Warms behind were now blocked by their own units!

In addition, the Drakon Riders on the right flank wavered the Void Lurker, a huge advantage at this stage of the battle.

Although Fiends, Void Lurker and Blood Warms were not able to attack, some of the units carried the fight to the enemies. Dread-Fiend finished off damaged Drakon Riders on the left while Scarecrows and Terror attacked their chosen foes. Unfortunately for Night Stalkers, they were not able to break their enemies.

Elves press forward with their attack to take advantage of the balance tipping in their favour. Both wavered units, Fiends and the Void Lurker, were attacked again and this time were defeated. Also Scarecrows and the Terror were not able to hold their ground against flank attacks.

With only single legion of Blood Warms and three heroes left the options for Night Stalkers were quite limited. Blood Warms defeated the Forest Warden but were now in the open and surrounded by several enemy units.

Blood Warms were defeated by the combined attack of the three Elven units. Even massive legion was not able to hold against this powerful charge. It was now clear that Night Stalkers army was defeated.

From now on three remaining heroes of the Night Stalker army tried to fight for their very lives. In the end, the Shade and the Horror survived the battle. However, Elves achieved tactical and strategic victory by capturing all objectives and destroying entire enemy army.

Many thanks to Jules for a great game! It is always a privilege to play against him and his beautifully painted army!

I must admit I was quite lucky in this game. There were three particular situations that, in my opinion, had a powerful impact on the game.

First, my gamble to lure Void Lurker into combat paid off but it was by no mean a guarantee. In fact, I was betting more on occupying it for long enough so that it would not threaten my other troops. I gained much more, even though Drakon Riders did not participate in action after that. They could, however, control another objective.

Second, Drakon Riders on the left surviving the attack by Phantoms. That is not often the case and I simply landed with them too close to allow being surged. But they survived and I could control that flank from now on.

And third, the fact I wavered Fiends with shooting. Not only it stopped them from finishing the Palace Guard and allowed me to rout them instead. But more importantly, blocked Blood Warms behind. Because of that I could focus on defeating a unit at a time without being under a direct threat immediately after.

I am fully aware, however, that if any of these situations turned out to be different, I would have been in big trouble!

Thanks for reading!
Posted by Swordmaster at 14:37